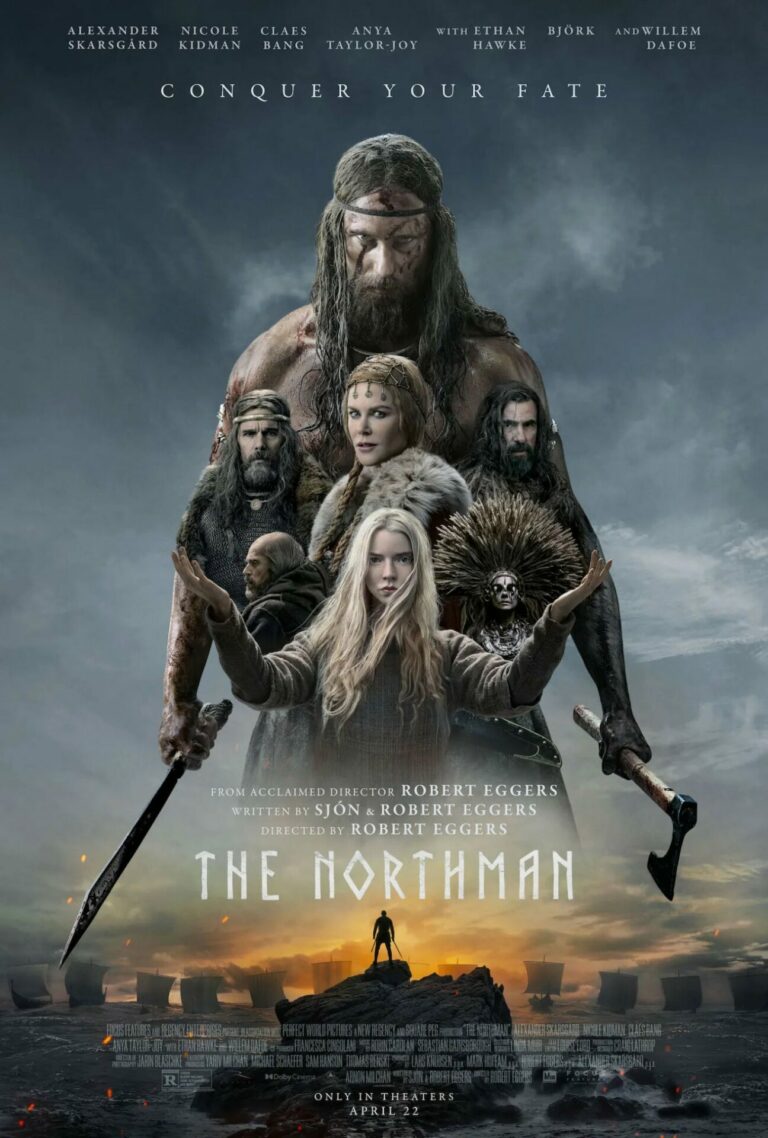 THE NORTHMAN, set in the early 10th Century, tells a violent tale about Scandinavians. Young Prince Amleth sees his father, the king of a fictitious island near Denmark, brutally murdered by his uncle, who kidnaps Amleth’s mother. Fleeing the kingdom, Amleth vows revenge. Two decades later, he’s a muscular warrior living among a Viking tribe raiding Slavic villages somewhere in the Baltic states. Amleth hears his uncle has lost his father’s kingdom and fled to Iceland, where he runs a large farm. Amleth sneaks aboard a ship taking Christian slaves to his uncle’s farm to exact his revenge.

THE NORTHMAN is an extremely violent movie with a depressing, bittersweet ending and explicit lewd content. Also, the filmmakers decided to treat the movie’s cultic visions as if they were real. For example, the protagonist actually sees visions of the entrance to Valhalla, the Viking heaven. However, two major parts of his pagan visions and prophetic visions of revenge turn out to be false. Also, the Christian slaves in THE NORTHMAN are positive characters, and both they and the protagonist support freedom from slavery.

(FRFRFR, PaPaPa, B, C, ACAC, L, VVV, SS, NNN, AA, DD, MM):
Dominant Worldview and Other Worldview Content/Elements:
A very strong Norse pagan worldview is filled with revenge and vengeance where the protagonist (whose father was murdered by his uncle so the uncle could take the father’s kingdom and wife) has visions of a Valkyrie riding on a white horse and visions of the entrance to Valhalla and gets visions of the future and receives prophetic visions from a Norse, pagan shaman that lead to his campaign for vengeance and justice, but one of the prophetic visions turns out to be false, but the movie also shows Christians who are made slaves by the Rus Norse from Ukraine, Russia and Belarus and sold to a Norse chieftain in Iceland (the Christians in the movie are rather positive, and the protagonist falls in love with one of them, although neither she nor her fellow Christians try to convert him, though they clearly support him in trying to overcome and even kill the chieftain and so become free (both the protagonist and the Christian slaves support freedom from slavery, which was the leading source of income for Norse going a Viking)
Foul Language:
Three or four obscenities (including one or two “s” words), and man calls a woman an “unclean whore,” plus one man vomits in one scene
Violence:
Extreme violence with some blood and some strong violence with some blood includes man shot with several arrows, and then he’s decapitated, Viking warriors raid a Slavic village fort and a brutal battle occurs, some women and children are rounded into a large hut, and the hut is set on fire, people are stabbed and killed by swords and knives, woman attacks man, and he eventually stabs her, but her young son tries to help his mother, and the man has to stab him and kill him, images of two men who’ve been tortured include the corpse of a totally nude man, a violent rugby type game using a round stone occurs, man takes the round stone and bashes another man’s head with it after the man had tried to kill the other man’s half-brother, villain starts killing slaves to get some information from them, at least two images of disemboweled men during violent battles, a matricide occurs, two men fight to the death, another man is beheaded, etc.
Sex:
Strong and light sexual content includes one brief scene of depicted fornication between protagonist and woman he loves, drunken revelry in one scene shows men and women naked in the woods, and one man on top of one woman in the woods, woman offers herself to her adult son and kisses him on the mouth, but he’s disgusted, married man wants to fornicate with one of his slave women, but she bares her body and shows she’s having her period, and court jester makes lewd gestures about a Viking queen
Nudity:
Full frontal female nudity when woman shows a would-be rapist that she’s having her period, full frontal male nudity of a dead man who’s been tortured to death, images of upper male nudity during battle, during a visit to a Viking shaman and during work on a farm and in a village, one image of rear female nudity, and at least two images of rear male nudity
Alcohol Use:
Alcohol use and drunkenness includes drunken revelry in one scene, and some Viking warriors use alcohol to build themselves into a violent frenzy before two battles
Smoking and/or Drug Use and Abuse:
No smoking, but people appear to eat hallucinogenic mushrooms in one or two scenes; and,
Miscellaneous Immorality:
The protagonist is vengeance minded throughout the movie, but his vengeance has unforeseen consequences at the end, protagonist has images of the Norse Tree of Death from which his ancestors hang, and male imagines he has a bear and a wolf spirit inside him during one ritual as a boy and during a scene of preparing for battle as a man.

THE NORTHMAN, opens in 870 AD and continues into the early 10th Century, tells the violent tale of a Viking man who seeks vengeance against his uncle who killed his father and took his mother as his wife, but the plan doesn’t go quite as his prophetic pagan visions of the future foretold. Based loosely on a Viking legend that was the source for Shakespeare’s play HAMLET, THE NORTHMAN is a very violent movie with a depressing, bittersweet ending and some explicit lewd content, and it portrays the story’s Viking pagan visions as if they were real, but two major parts of the protagonist’s pagan visions and prophetic visions of revenge turn out to be false.

At the end of the Ninth Century, young Prince Amleth is on the cusp of becoming a man when his father, who’s the king of a fictitious island near Denmark, is brutally murdered by his uncle, who kidnaps Amleth’s mother. Fleeing his island kingdom by boat, Amleth vows revenge. Two decades later, Amleth is a muscular warrior living among a Viking tribe raiding Slavic villages somewhere in or around the Baltic states and down the Volga into what is today Russia.

After Amleth and his fellow warriors raid a village and kill many people, a seeress reminds Amleth of his vow to avenge his father, save his mother and kill his uncle. He learns that the Viking tribe is going to trade some of the Christian slaves it captured to a Viking farmer in Iceland. The farmer turns out to be his uncle. Amleth learns his uncle lost the island kingdom to a foreign king and had to move to Iceland, where he runs a large farm with his loyal friends from the kingdom he lost.

Amleth decides to sneak aboard the slave ship to Iceland. In Iceland, he infiltrates his uncle’s farm and finds a sacred sword that appeared in his Viking visions. With the help of Olga, an enslaved Christian woman, Amleth plots his revenge against his uncle and his uncle’s friends.

THE NORTHMAN is a very violent movie with a depressing, bittersweet ending. [POSSIBLE SPOILERS FOLLOW] For example, as Amleth is on the cusp of fulfilling his vow, he finds that things are not quite what they seem on his uncle’s farm. Also, the movie’s climax has a downbeat ending. The only saving grace is that Olga turns out to be pregnant with twins who will possibly inherit Amleth’s kingdom.

THE NORTHMEN is admittedly very violent, pagan and vivid in some of its sex scenes, but even so, it is a surprisingly accurate portrait of the Scandinavians who were called Northmen by most of the rest of Europe. In the first place, the costumes were very correct. The Northmen did not wear horned helmets when they went a Viking. They wore very simple helmets, and the berserkers went into battle shirtless in most circumstances, having worked themselves up into a frenzy (one anthropologist said they could have been taking drugs). They also had intense pagan ceremonies and a strong conviction in Valhalla, which, if they died in battle, that’s where they would be blessed to go.

Before Christianity, there were a tremendous number of blood feuds, with, for example, kings of Denmark like Harold Bluetooth being deposed by his son. Quite often these were bloody, which nobody minded because you could go to Valhalla. Like most pagan cultures, vengeance was a prime motivator, and visions were common that would lead to battle. All that said, by 870 AD, many Scandinavians were coming to Christ.

The best book on this is the famous LONG SHIPS novel, and a Great Courses course on the subject simply Northmen, “The Vikings.” The Vikings is what they do, it’s not who they are. Going Viking was going to conquer and plunder.

They also made a lot of money after they went Viking by selling slaves. Most of their slaves were from people from Ireland, Scotland, England, and Celts, or they were Slavs from Poland and Russia.

The movie is quite accurate about most of this, even down to the details on how long it took to sail from Norway to Iceland.

“Hell” is a Scandinavian word. The people lived in deep, deep forests. For them, the symbol of the world was a tree, the different realms were like farmsteads, and Hell is a realm hanging on a tree, as is this world and Valhalla.

By the way, the Germans or Goths originated in Gotland in lower Scandinavia.

However, the filmmakers behind THE NORTHMAN decided to treat the visions as if they were real. For example, Amleth actually sees visions of the entrance to Valhalla and of a Valkyrie, a supernatural female warrior riding a white horse, who bears warriors to Valhalla, the Viking heaven from where Odin, the “All Father” reigns, although Thor is the primary god in most of Scandanavia. In the end, however, one of Amleth’s supernatural visions of total victory over his evil uncle doesn’t come to pass as he and a pagan shaman he consulted predicted. As a result, one question remains after watching THE NORTHMAN. Since the supernatural prophecy of victorious revenge against the uncle turns out to be false, does this mean the filmmakers are saying that Viking paganism and desires for vengeance are also false? The ending to THE NORTHMAN doesn’t say.

Besides false religion and extreme violence, THE NORTHMAN contains explicit nudity and some sexual immorality. However, the Christian slaves in the movie are positive characters, including the woman who falls in love with the protagonist, Amleth. Also, both Amleth and the Christian slaves support freedom from slavery. Slavery was the major source of money from trade.

THE NORTHMAN would have been much better with a happier ending and stronger Christian content, more like the great 1958 Viking movie that Kirk Douglas, Tony Curtis, Janet Leigh, and Ernest Borgnine did, which was called, simply, THE VIKINGS.