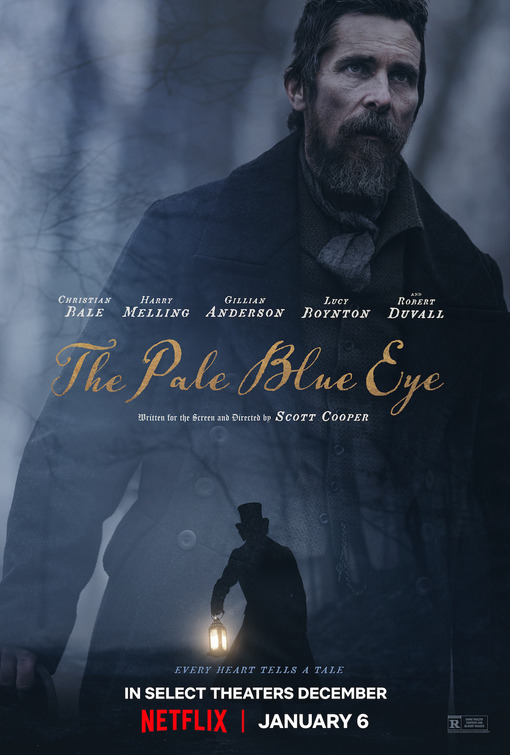 THE PALE BLUE EYE is a melancholy mystery set in 1830. A widowed, retired police detective named Landor teams up with a young Edgar Allan Poe to solve a murder with a macabre twist at West Point. They investigate the hanging of a cadet whose heart was cut out after his corpse was sent to the morgue. During their investigation, the two men find that the murder and mutilation may be related to a secret satanic ritual being performed in the nearby icehouse.

THE PALE BLUE EYE is well-crafted. It also has a melancholic beauty. The dialogue is well-written, but the plot is sometimes slow. The Satanism in the movie is portrayed as evil, not good, though any time you have such content in a movie, there are a few impressionable people who may want to copy it. THE PALE BLUE EYE has strong Christian, biblical references, but one criminal goes unpunished, legally. The movie contains intense violence, references to murder, rape and suicide, three strong obscenities, and two scenes where an unmarried couple lies in bed. So, MOVIEGUIDE® advises extreme caution.

(RoRo, CC, BB, H, O, LL, VV, S, N, A, MM):
Dominant Worldview and Other Worldview Content/Elements:
Strong Romantic, lawless worldview as a righteous character decides to let two murders go unpunished because the murder victims deserved to be punished, though perhaps not murdered, but this is mitigated by some strong and overt Christian, biblical, moral references including a Christian funeral, a major character quotes Scripture, and people express belief in the biblical God and Jesus Christ, though one major character has given up his faith because of two terrible family tragedies, plus two characters are caught performing a Satanic ritual involving human sacrifice, but they are stopped and die in an accident that occurs during the fight against them, and a young man is haunted in his dreams by the early death of his mother and feels his mother is speaking to him
Foul Language:
Three “f” words, one “bastard” and six light exclamatory profanities such as MG and “Almighty God”
Violence:
Some strong and light violence with some blood includes two scenes with fighting, a man strangles one man to death with a rope while trying to elicit a confession out of him, man beats a second man to death, images of two dead male bodies with cuts in their chests where their hearts were removed, one of the two dead men is said to have been castrated (nothing is shown of that, however), man cracks a corpse’s fingers open to reveal a torn note, a character holds a human heart in hand and puts blood on their nose and chin to perform a Satanic ritual involving human sacrifice, but the evil ritual is stopped in the nick of time, a character deliberately falls over high cliff to commit suicide into large river below, three men accost a woman to rape her, but the camera cuts away, rape victim is later shown to have a bloody hand and two scratches on her face, a man is suddenly attacked by another man, but a third man intervenes and stops the attacker from killing the victim, man is hanged on a tree while being interrogated, but he quickly chokes to death, two people die in a raging fire
Sex:
Implied fornication as an unmarried couple lie in bed together in two scenes, young man recites a lewd limerick to some other young men, there’s an implied rape in one scene (the scene only shows three men accosting a young woman in a tunnel below a bridge)
Nudity:
Images of upper male nudity of two murdered people
Alcohol Use:
Whiskey, beer and sherry are drunk in homes, at a bar and in two rooms
Smoking and/or Drug Use and Abuse:
No smoking or drugs; and,
Miscellaneous Immorality:
Strong miscellaneous immorality overall such as some lying, a scene with gambling, revenge occurs and goes unpunished, two people are framed for a murder, a crime is covered up and goes unpunished, a doctor gives up when his medical science fails to cure a terminally ill family member, some bullying occurs, and a major character considers himself to be a victim of other people so often that he seems to be wallowing in self-pity.

Netflix once again proves they are lovers of things dark, creepy and mysterious. In their original movie, “The Pale Blue Eye,” which was briefly released in a few theaters, viewers are whisked back in time to Hudson Valley, New York, in 1830 to solve a murder mystery with a macabre element. The story follows a retired policeman, Augustus Landor, who’s asked to solve a murder at the United States Military Academy. While there, Landor finds himself a kindred spirit of loneliness and melancholy in one of the cadets, Edgar Allan Poe. The poet and investigator dig into the murder of Cadet Leroy Fry and find that his heart has been cut out after going to the hospital morgue. This macabre and occult oddity leads the investigators down a rabbit hole.

During their investigation, Poe falls in love with the West Point doctor’s epileptic but beautiful daughter, Lea Marquis. Meanwhile, Landor reveals the death of his own wife and the disappearance of his daughter, Mattie, who ran asway from home.

As time passes, another cadet is found murdered with his corpse also mutilated. Meanwhile, a third cadet has apparently gone AWOL. Also, during the investigation, Landor has found an occult circle drawn on the floor of the local icehouse, with signs of a Satanic ritual.

THE PALE BLUE EYE is a well-crafted mystery. It captures the melancholic feeling that might be found in some of Edgar Allan Poe’s poems or stories. The mystery is intriguing, has many twists and turns, and leaves viewers wondering until the very end, which is hard for mystery movies to accomplish nowadays. If a person values history and mystery, then they might find this movie to be a delightful treat. However, it sometimes moves a bit too slowly to be totally compelling. That said, the dialogue is superlative, and the movie’s stark, grayish palette sets an excellent mood of shadowy mystery.

In the movie, Harry Melling masterfully portrays Poe, the “peculiar” poet who eventually uncovers the story’s central riddle. Christian Bale, who plays Landor, is most effective when he portrays his character’s grief. The rest of the cast, which features some well-known veterans, delivers fine support for the two male leads.

Based on a novel by Louis Bayard, the title for the movie comes from a line in Poe’s famous short story, “The Tell-Tale Heart” about a crazy person, probably a man but not necessarily, who kills the “old man” with whom he lives, because the man has an “Evil Eye,” which is “pale blue.”

THE PALE BLUE EYE is meant for adults. It isn’t a movie to watch with the family. Many of the movie’s themes are heavy, and the movie is a little gory at times. THE PALE BLUE EYE also has intense violence, three strong obscenities, brief sexual immorality, occult content, and references to murder, suicide and rape. Despite this, the movie shies away from being too graphic or extreme, though there are some images of two corpses and some bloody images.

The movie’s worldview seems to ping pong back and forth between having a Christian, moral worldview and a Romantic worldview, with the Romantic worldview seeming slightly more dominant at the end. The two protagonists are torn by following their own feelings and doing what feels right to them, over what is right in the eyes of God. Poe is depicted as a melancholy Romantic poet, but he makes positive references to God and Scripture. Meanwhile, Landor is shown as a broken, grief-stricken man who has much resentment in his heart and stopped going to church. Some of the other characters believe in God and defend Him. The movie also has a positive reference to Jesus and a Christian funeral scene. THE PALE BLUE EYE also contains references to the occult and Satanism. For example, Poe is haunted in his dreams by the early death of his mother. He feels that she’s still speaking to him. [SPOILER FOLLOWS] In the movie’s climax, a distraught woman begins a bloody demonic ritual, with her brother helping her to sacrifice a human life to Satan. However, they are stopped from carrying out this evil deed and are punished severely.

Eventually, though, a final plot twist reveals a solution to two other crimes in the movie. The crimes are in response to another despicable crime that’s revealed in the third act. These crimes of revenge ultimately go unpunished, because the original crime was so despicable and led to a terrible personal tragedy. As a result, the ending in THE PALE BLUE EYE is not wholly morally satisfying. It also may leave viewers feeling as sad and melancholy as one of Edgar Allen Poe’s most sorrowful poems. The two best examples of this probably might be Poe’s THE RAVEN, with its melancholy refrain, “Nevermore,” or his last completed poem before his untimely death, ANNABEL LEE, about a wife who died and was laid to rest “in a kingdom by the sea.”