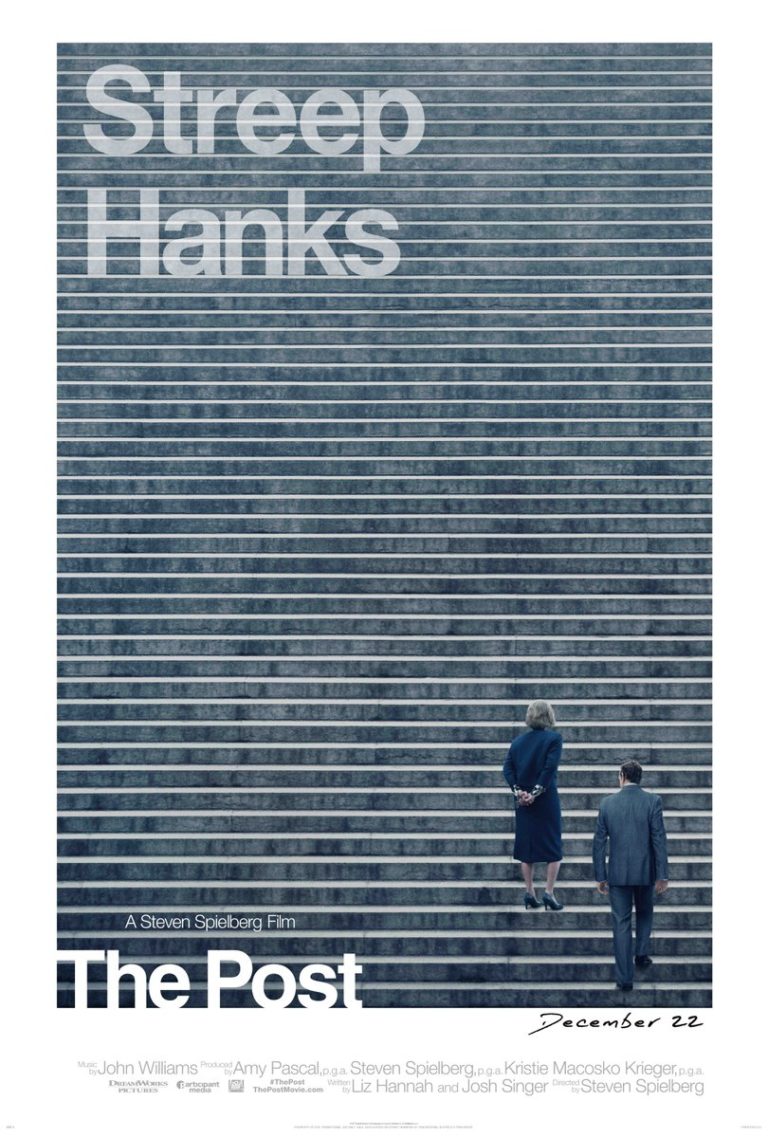 THE POST tells a very one-sided, false, superficial story about how the federal government tried to stop the New York Times, then the Washington Post, from printing the “Pentagon Papers.” The Papers supposedly revealed decades of lies by various presidents about the Vietnam War and American involvement. The movie focuses mainly on Post Executive Editor Ben Bradlee’s efforts to get the Papers published. That focus includes the Post’s new publisher, Kathryn Graham, struggling with the economic effects of publishing the top-secret report.

THE POST is a riveting movie, with superb editing and direction and a great score by John Williams, the longtime master of movie music. However, the movie contains lots of gratuitous foul language, including many strong profanities. It also makes factual errors and omits some important facts about the Pentagon Papers and Vietnam. For example, the Papers actually were compiled and written by radical leftist opponents of the war, led by leftist Morton Halperin. Ultimately, THE POST is an abhorrent, shallow, one-sided, false propaganda piece. This annoying ham-fisted propaganda irreparably taints the artistic achievements of Steven Spielberg’s THE POST.

Dominant Worldview and Other Worldview Content/Elements:
Very strong humanist, leftist worldview with a false, leftist view of American history that attacks the American government’s actions in Vietnam and Southeast Asia from the late 1940s to the early 1970s, but even so does make an argument for the First Amendment, but within the context of the movie’s false leftist, humanist worldview, plus the movie has a strong radical feminist viewpoint that includes a ridiculous moment of hagiography that’s fairly laughable.
Foul Language:
At least 28 obscenities, 13 strong profanities (about eight or nine misuse Jesus Christ), and five light profanities.
Violence:
Brief war violence as men fight and are killed in the jungles of Vietnam.
Sex:
No sex.
Nudity:
No nudity.
Alcohol Use:
Alcohol use.
Smoking and/or Drug Use and Abuse:
Smoking but no drug references.
Miscellaneous Immorality:
Man steals top-secret report full of top-secret and classified federal documents (movie overtly promotes this immoral act) and movie contains factual errors and many factual omissions that would contradict its premise, including whitewashing Pres. Kennedy’s immoral sexual escapades, not to mention Pres. Johnson’s.

THE POST, Steven Spielberg’s new historical drama, is admittedly dramatic, but not very historical. It tells a very one-sided, ultimately shallow, left-leaning story about how the federal government tried to stop the New York Times, then the Washington Post, from printing the “Pentagon Papers,” which supposedly revealed decades of lies by various presidents about the Vietnam War and allegedly revealed that all the presidents through Nixon knew the war was “unwinnable.” It doesn’t tell viewers, however, that the thousands of pages of documents and commentary were assembled and written by two left-wing opponents of the war, Morton Halperin and his assistant, Leslie Gelb. THE POST also inserts a radical feminist take on the Post’s new leadership under Publisher Kathryn Graham, who took over that role when her husband, the previous publisher, died.

The movie opens in Vietnam, with Daniel Ellsberg telling Secretary of State Bob McNamara that he thinks the war situation there was going in a negative direction. Immediately after telling McNamara that, Ellsberg is astonished to hear McNamara lie to the press, telling them that the situation is going in a positive direction. A couple years later, Ellsberg is working at the Rand Corporation with his friend, Anthony Russo, and making copies of the top-secret Pentagon Papers study compiled by Halperin and Gelb for McNamara. In fact, the movie shows the two men cutting off the bottoms of their copies, which say “Top Secret.”

Cut to 1971. Ben Bradlee (Tom Hanks), executive editor of the Washington Post, is concerned that he hasn’t seen Neil Sheehan, the top investigative reporter at the New York Times, write anything for several months. He thinks Sheehan is working on a big story.

Meanwhile, Kathryn Graham has just taken over as the Post’s publisher, after the tragic suicide of her husband. Her father passed control of the family paper to her brilliant husband, but now she has to make all the tough decisions. Also, she has decided to put the Post on the now-defunct American Stock Exchange, to raise enough money to hire more reporters and make the Post a national newspaper to compete with the Times.

Sure enough, Bradlee’s suspicions about Sheehan of the New York Times turn out to be right. The Times starts publishing Sheehan’s stories about the Pentagon Papers. However, two days later, Pres. Nixon orders his Attorney General to stop the Times from publishing any more of the top-secret documents. The Justice Dept. takes the Times to court.

Meanwhile, Bradlee’s right-hand man, gets hold of Daniel Ellsberg, the guy he thinks turned the Pentagon Papers over to the Times. Ellsberg agrees to give the massive report to the Post too. Now, Kathryn Graham has to decide to publish, and endanger the newspaper’s public offering and its financial future, or not to publish and let the government get away with suppressing the “freedom of the press.”

THE POST is a riveting movie, with superb editing and direction and a great score by John Williams, the longtime master of movie music. However, the movie contains a lot of gratuitous foul language, including many strong profanities misusing God’s Holy Name. Also, THE POST contains multiple factual errors and omissions in THE POST that turn the movie into a one-sided, shallow, misleading propaganda piece.

Second, the movie never shows that the Papers were assembled and edited by two left-wing opponents of the war, Morton Halperin and his assistant, Leslie Gelb. According to Discover the Networks (http://www.discoverthenetworks.org/individualProfile.asp?indid=1682), a conservative publication, Halperin and Gelb assigned most of the writing of the massive report to “leftwing opponents of the war,” including Daniel Ellsberg! After the Vietnam War, Halperin became a Pro-Soviet apologist for the Anti-American communist leaders in Moscow and argued for the dismantling of American

intelligence operations. Since 2002, he has been a close associate of leftist billionaire George Soros, even working officially for Soros’ Open Society Policy Center!

Third, in Spielberg’s movie, Bradlee is impressed that the Pentagon Papers contend that all the presidents, from Truman through Nixon, knew that the Vietnam war was “unwinnable,” but the facts show otherwise. For example, though the communist “Tet Offensive” in 1968 caught the U.S. Military by surprise, the American forces actually won that battle, contrary to press reports on Vietnam and the Pentagon Papers. Also, when Pres. Nixon started using a strong, targeted bombing campaign against the North and its allies, the North agreed to hold peace talks. In addition, America’s goal in fighting the Vietnam War was not to conquer North Vietnam but simply to ensure some measure of liberty and self-government for the people and the anti-communists in South Vietnam. These facts show that the Vietnam War was far from “unwinnable.”

Fourth, contrary to Spielberg’s movie, there’s evidence that reporters from the Washington Post and especially the New York Times misrepresented some of the major conclusions in the Pentagon Papers. For example, John Burke and Fred Greenstein’s 1989 book on Vietnam, HOW PRESIDENTS TEST REALITY, exposes how the New York Times falsely reported in its coverage of the Pentagon Papers, stating that the Papers showed that Pres. Johnson had already decided to expand America’s involvement in the Vietnam War before the 1964 presidential elections (where Johnson told the voters he had no intention of expanding the country’s involvement). In reality, Johnson was still making up his mind and didn’t make the decision to expand American involvement until AFTER the election. Also, Edward Jay Epstein’s 1975 book BETWEEN FACT AND FICTION shows how the press “mishandled” the Pentagon Papers and the Vietnam War because of their biases against the Vietnam War. Thus, it was wrong for the Times and the Post to treat the Papers as an objective report on the history of American involvement in Vietnam.

Finally, during the movie, Ben Bradlee assures his boss at the Post, Kathryn Graham, that publication of the Pentagon Papers won’t endanger any American troops in Vietnam. However, the movie fails to note that this was one of the strongest arguments in the government’s case against the New York Times to stop it from publishing elements of the top-secret report. MOVIEGUIDE® cannot adjudicate this dispute here, but the dissenting opinions of the Supreme Court in the Pentagon Papers case make some good points about why the Times should not be allowed to continue publishing the Papers.

However, one of the things Tom Hanks as Post Editor Ben Bradlee says toward the end of the movie is that news outlets must hold government officials “accountable.” That’s his job, he tells Mrs. Graham and other people. MOVIEGUIDE® asks, however, Who holds the press accountable? For years, it’s been clearly obvious that the national “news” media, including the people running the Washington Post, the New York Times and the network news outlets, has an Anti-American, Anti-Christian, radical liberal, and even leftist agenda. #FakeNews has become their primary modus operandi, and particularly so when it comes to Pres. Trump. The fact that Director Steven Spielberg clearly didn’t do his due diligence when making this movie or reveal the leftist bias behind the Pentagon Papers compiled and composed by Morton Halperin and his aide, Les Gelb, and the Times and the Post’s reportage on the Pentagon Papers, nor examine the dissenting court opinions in the Pentagon Papers case, shows that he’s become part and parcel of the Leftist #FakeNews Cabal.