THE RESCUERS DOWN UNDER 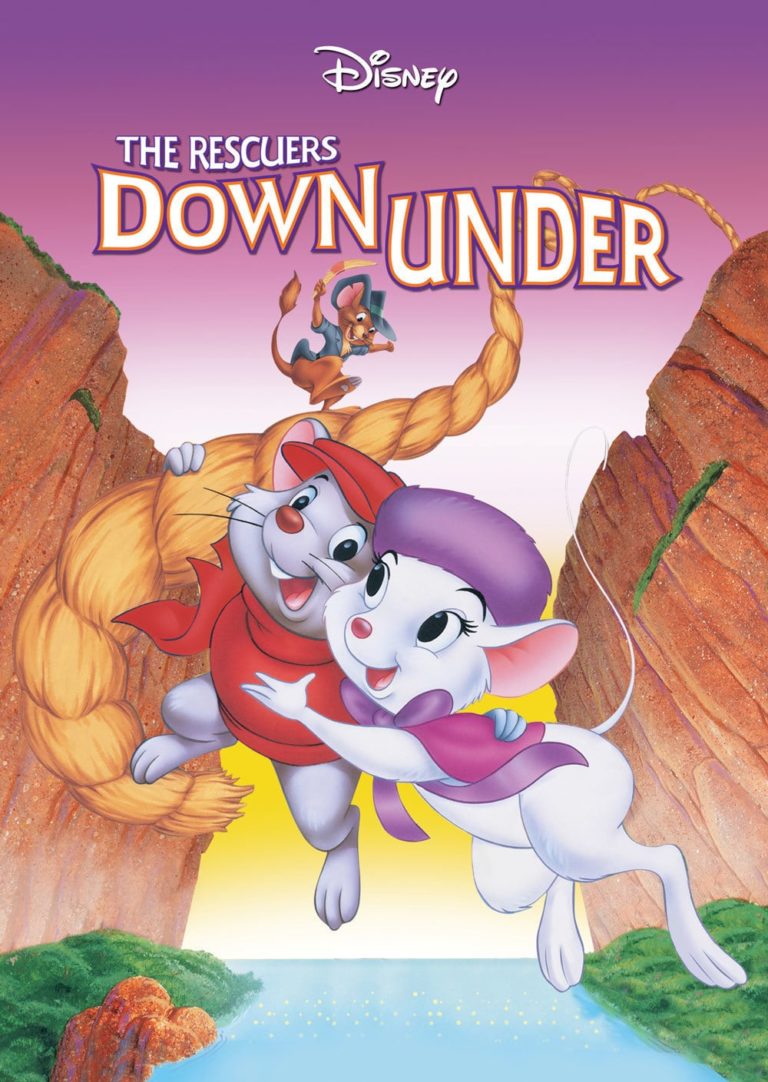 The Disney studios still know a lot about making quality children’s fare and prove it here by giving us not one, but two beautifully animated films on the same bill.

THE PRINCE AND THE PAUPER

The first is a 24-minute featurette, THE PRINCE AND THE PAUPER, inspired by the Mark Twain classic. It takes place during a time in England when the great king took ill. As a result, the captain of the guard terrorized the countryside, until one day a royal mix-up at the palace occurs.

Peasant Mickey Mouse, a double for the prince, agrees to change places with the prince since the prince envies the beggar boy’s freedom. The prince, who believes that “even the lowliest subject demands respect,” tells Mickey before leaving that his royal ring will tell them apart.

The prince discovers that crimes are being committed in the king’s name; and so, he begins to distribute food. Mickey, meanwhile, promises the dying king that he will rule the land from the heart wisely and justly. However, the captain of the guard discovers the switch and kidnaps Pluto to force Mickey to do his bidding. Then, he throws the prince in jail while the coronation gets underway.

However, with a little help from Mickey’s friends — Goofy, Pluto and Donald Duck — the prince squares off against the treacherous captain in a duel of swordsmanship. The adventurous action is fast and furious as good triumphs over evil. The animation, done in the classic majestic style, is so good that even individual falling snowflakes look like the real thing.

There is a 10 minute 10 second intermission before the main feature begins, marked by an animated intermission countdown clock, which harkens back to yesteryear.

THE RESCUERS DOWN UNDER

IN THE RESCUERS DOWN UNDER, an Australian boy named Cody frees a bound golden eagle, but is later taken prisoner himself by McLeach, a crazed poacher who wants the lad to tell him where the rare bird’s nest is.

Radio signals traverse the globe via mice in military installations, who get the word to special mouse agents Bernard and Miss Bianca (voices provided by Bob Newhart and Eva Gabor). Joining them on their mission is Wilbur, a fun-loving, wide-bodied albatross, whose jokes and one-liners about the airline industry are hilarious.

Once there, they are guided into the exotic Australian outback by Jake, a rugged Crocodile Dundee-type kangaroo mouse who knows the territory. Jake has his eye on Miss Bianca and stands in contrast to the meek, but resourceful Bernard, who is working up his nerve to ask for Miss Bianca’s hand in marriage.

Cody, meanwhile, is held captive in McLeach’s den with other imprisoned animals who are destined to be made into belts, purses and other artifacts. The setting makes for some genuinely frightening action, as does George C. Scott’s voice which is well-suited to the character. The poacher, in fact, is drawn even to look like George C. Scott.

When the boy won’t talk, McLeach frees him under the pretense that the eagle is dead, then follows him since he knows Cody will be concerned about the nest eggs. McLeach is thus able to capture the mother eagle, then sets out in his formidable all-terrain vehicle to throw Cody into a crocodile pit. Can three mice and an albatross stop the ruthless poacher in time?

Disney animators have again done a superb job in creating spectacular settings, memorable characters and lots of adventure. Particularly noteworthy is the way that real nature-life movements have been captured and mimicked. Good aerial perspectives and swirling wind effects make this even more significant.

Biblical principles, such as perseverance and teamwork, are exemplified. Hope is set up as a standard. And, all ends well, with Jake saying to Bernard, Aussie-style, “Well done, mate.” Adults who appreciate good animation and brisk storytelling would do well to take their families to see THE RESCUERS DOWN UNDER and THE PRINCE AND THE PAUPER.

Rent or Buy THE RESCUERS DOWN UNDER: