THE TREE OF LIFE 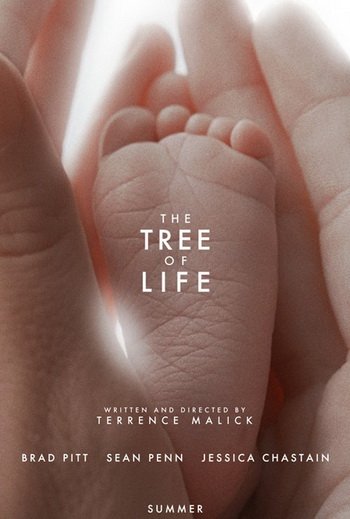 THE TREE OF LIFE is an impressionistic kaleidoscope of raw emotions, lyrical passages and cosmic grandeur. Using unconventional narration where characters sometimes voice their thoughts in whispers, it tells the story of a Texas family in the 1950s. It focuses on the eldest of three brothers, Jack, and his complicated relationship with his strict father, a devout Catholic. The father’s clearly loving, but he’s also sometimes mean. As their story progresses, the movie shows Jack and his mother contemplating the ways of God, with a majestic Creation sequence that shows gasses exploding and the Earth giving way to life.

THE TREE OF LIFE is billed as a hymn to life. As such, it contains impressionistic scenes of the awe and wonder of Creation, positive biblical references, a scene of reconciliation, and discussion of the positive qualities of Grace, from a Christian viewpoint. The mother narrates that the nuns taught her Nature is selfish but Grace is loving. The movie sides with the nuns’ definition of Grace, as the father reconciles with Jack. Virtually free of any obscenities, TREE OF LIFE is worth seeing, but its unconventional storytelling is not for everyone.

(CC, B, Ab, EvEv, L, V, N, M) Strong but non-evangelistic Christian worldview with some moral elements and philosophical references/reveries, including questions to God and references about Creation and sinfulness, with references to biblical passages (including an explicit one to Job 38:4,7 which opens the movie), brief sermon on Job heard from preacher, grace said during two meals, woman’s narration says the nuns taught her that there are two ways through life – the way of Nature and the way of Grace, Catholic man preaches alone in church and makes sign of the cross, implied reference to Roman 7 (which discusses people’s sinful nature), boy looks at stained glass picture of Jesus on trial, and images apparently related to an afterlife reunion, but some negative role model aspects to the character of protagonist’s father, who is a devout Catholic with an anger problem, though he is also seen as very loving, and he eventually reconciles with his older son, who almost turned to the dark side of evil because of the father’s strict taskmaster rules, plus some impressionistic, implied but strong references to evolution as movie shows creation of an Old Earth, dinosaurs and Earth’s eventual withering as the sun dies, by implication billions of years hence; one “h” obscenity, one light exclamatory profanity and father tells son he has to grab life by its “nuts”; some light but scary violence as father shakes boy at the dinner table for talking, wife slaps husband, husband physically restrains wife but doesn’t hit her, boys fight, father teaches some boxing to his sons, visions of exploding gases in outer space, dinosaur apparently dying from a gaping wound that’s shown from a distance, dinosaur lays its foot on slightly smaller dinosaur’s head as it apparently lays dying near large stream but then walks away, boys put frog on firecracker rocket, boys smash window panes of empty house, boy injures his brother’s finger with air gun, mother gets message about one son’s death but it’s never revealed what really happened although later the oldest brother says to himself that his brother died at 19, and boy begins to turn into a bully, even bullying his younger brother, but boy eventually turns away from his anger; no sex; upper boy nudity; no alcohol; no smoking; and, bullying, boy steals nightgown from teenage girl’s house when no one’s there, strict father alienates three sons but later sort of apologizes to older son for being too harsh.

THE TREE OF LIFE, the grand prize winner at the 2011 Cannes Film Festival, is an exquisite, sublime, profound, majestic, emotionally powerful work of art by maverick film director Terrence Malick. It’s not a movie for everyone, however. In fact, some (if not many) will even be frustrated by the movie’s slow, introspective, artsy approach to its heady subject matter, which ranges from the origins and meaning of life to the existence of God, the bonds and conflicts that family life conjures, and the way in which nature and spiritual grace shape life. Others, however, including many Christians and other theists, will be totally captivated.

After quoting Job 28:4,7, the movie opens with an older Jack Blake, played by Sean Penn ruminating on the death of one of his two younger brothers. He also refers to his belief in God, while giving some apparent expression to doubts about God’s activity in the affairs of people in the wake of his brother’s death. Also heard is his mother’s voice giving expression to similar doubts. The mother also says that the nuns taught her there are two ways through life: the way of Nature; and, the way of Grace. She discusses the differences between Nature and Grace, saying basically that Nature is selfish, but Grace is based on unmerited love.

At that point, the movie shifts to a vivid portrayal of the birth of the universe and the Creation of Earth. It also shows life spreading from the ocean to the land. The movie then jumps to the so-called dinosaur age. In that sequence, one scene shows a two-legged dinosaur seemingly contemplate whether to kill an injured, smaller dinosaur lying on the rocky shore of a large stream.

The movie switches to the 1950s, somewhere in Texas. A young Jack is shown growing up. Images of him learning to walk and greeting the arrival of his first brother give way to scenes of him as a budding teenager. The family goes to Catholic church, but the father, who’s frustrated because he never became the classical pianist he dreamed of becoming, seems somewhat strict with the boys. At the same time, he’s clearly a loving father, but the mother seems much more so.

Eventually, after watching the joys and conflicts of being with their father, it becomes clear that the father is alienating Jack and his two brothers. In the wake of this, Jack starts to become a bully himself. The question becomes, will Jack and his father give in completely to their sinful nature?

THE TREE OF LIFE plays like an arty cross between 2001: A SPACE ODYSSEY, ORDINARY PEOPLE and STAND BY ME, with spiritual elements that include Christian, biblical references. Director Malick eschews conventional storytelling and dialogue to create an impressionistic kaleidoscope of raw emotions, lyrical passages and cosmic grandeur. He ties it all together with a classical soundtrack that includes gorgeous hymnal tones.

There’s only one light obscenity and one vulgarity through the movie’s whole 138 minutes. Also, there’s no crude sexual content or explicit nudity. However, there’s some light but sometimes disturbing violence. For instance, when Young Jack starts roaming the town with a gang of boys, they bust some windows in an abandoned house and tie a frog to a fireworks rocket. Jack also bullies his brother. Finally, in one scene, the father gets very upset, for no good reason, at Jack’s next younger brother at the dinner table. This upsets the mother, who slaps her husband’s chest after the children leave the room. This results in a brief struggle where the father grabs his wife and uses his strength to restrain her and calm her down. This still leaves her very upset.

This violence would be more of a problem were it not for [SPOILERS FOLLOW] the father’s eventual realization that he’s been too mean. This realization, which occurs when the father loses his job and has to move the family, ends in a poignant reconciliation with Jack. The father seems to turn aside from his wrath, and Jack himself seems to get over his flirtation with being a bully. Also, although Older Jack is still clearly upset as he ruminates on what happened with his family, it seems clear that he’s overcome the troubled moments of his past.

Thus, all’s well that ends well, and, eventually, there’s a poetic scene where the family seems to have a happy meeting in the afterlife. This scene, which takes place on a beach, is clearly poetic because Jack appears as his Sean Penn older self, while his family appears as they were in the 1950s. The movie then jumps back to the present day, where Older Jack looks up at some gleaming skyscrapers and smiles.

The acting in THE TREE OF LIFE is excellent, especially by Brad Pitt, Jessica Chastain and Hunter McCracken as the father, mother and Young Jack. The scenes with Sean Penn, however, don’t give enough information about Older Jack to really allow Penn to do much of anything. His scenes are perhaps the most impressionistic.

In the final analysis, THE TREE OF LIFE seems to have a strong Christian worldview. The worldview is always explicit or as strong as it could be, however, because this is a more philosophical movie that asks questions and shows the wonders of God’s creation more than it provides theological answers. That said, the movie clearly sides with the philosophical implications of the New Testament’s definition of God’s grace, including repentance and forgiveness. Thus, the mother character, who represents Grace, is the most sympathetic character, and the father, who represents Nature, seems to come around to her position during the scene where he reconciles with Young Jack.

The movie also opens by quoting Job 38:4,7, “Where were you when I laid the foundation of the earth. . . when the morning stars sang together and all the sons of God [or angels] shouted for joy?” There’s also an allusion in one scene to Romans 7, where Paul admits his sinfulness, saying he does things he doesn’t want to do. This is exactly what Young Jack whispers in voiceover in the scene. Finally, although Jack and the mother question God, their belief in God is still there, though the movie doesn’t reveal the details of their belief or how strong it is. Best of all, Jack’s father is warmly greeted when the family has its happy afterlife reunion. In that scene, although God or Jesus are not mentioned, there’s an Amen being sung on the soundtrack.

Ultimately, THE TREE OF LIFE is a beautiful, affirmative cinematic achievement. Even so, we must repeat that it’s not a movie for everyone. So, if you must have a more traditional plot structure to enjoy a movie, you might want to avoid THE TREE OF LIFE. Even so, if you don’t mind a loose plot structure full of impressionistic scenes, then you just might find THE TREE OF LIFE to be a mesmerizing, emotionally powerful, unique, and thought-provoking experience. Caution is advised, however, for the dramatic conflict in the movie, which shows the devout Catholic father to be troubled, and for some implications of evolution during the movie’s sequence of the creation, or birth, of life on Earth.

Watch THE TREE OF LIFE: