"Movie Star Learns the Value of a Valet" 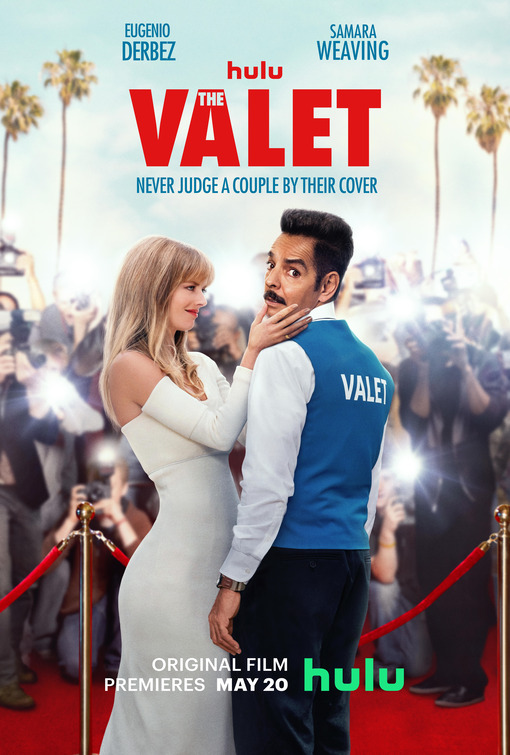 THE VALET is a comedy on Hulu. Olivia, a movie star, and a billionaire, Vincent, hire a valet, Antonio, to cover up their extramarital affair. Antonio poses as the movie star’s boyfriend after the paparazzi uncover Olivia’s illicit affair with Vincent, who’s married. Vincent’s wife hires a private investigator to verify the story and to find out if her husband really is having an affair. Olivia and Antonio must appear in public a few times to make their story believable, which includes the red carpet opening of her newest movie. The narcissistic actress forms an unlikely friendship with the sincere, hard-working Antonio and his family.

THE VALET has many laugh-out-loud moments that revolve around the issue of sincerity. The performances are excellent. Even better, THE VALET has a strong Christian, moral worldview. It extols family, rebukes infidelity and immorality, and has an uplifting scene set in a church. However, there’s a staged sex scene, where the main characters are partially dressed. THE VALET also has some crude and rude sexual humor, 19 obscenities, including two “f” words, and two strong profanities. So, MOVIEGUIDE® advises extreme caution.

(CC, BB, Ab, Pa, PC, LL, V, SS, N, AA, DD, M):
Dominant Worldview and Other Worldview Content/Elements:
Strong Christian, moral worldview where infidelity and immorality are ultimately rebuked also contains a church funeral scene where a main character gives a eulogy on good Christian values of caring for family members and other people, marred by some immoral pagan behavior and light politically correct allusions to class differences, which, however, the movie ultimately transcends
Foul Language:
About 19 obscenities (including two “f” word) and two Jesus profanities
Violence:
Light violence incudes man runs into a car with his bike, and main character is punched in the face
Sex:
A staged sexual scene occurs with the participants partially clothed, an adulterous couple is shown in bed under covers, inappropriate and crude sexual humor, and mother of protagonist often fornicates with her neighbor and brags that she asks him to be “rough” with her
Nudity:
Upper male nudity
Alcohol Use:
A main character drinks, drunken scene followed by passing out and a hangover
Smoking and/or Drug Use and Abuse:
Some smoking and main character abuses prescription pills;
Miscellaneous Immorality:
Lying, and a husband and wife plot against each other and spy on one another.

THE VALET is a romantic comedy on Hulu about a famous movie actress and a married billionaire who hire a valet to cover up their extramarital affair, but the actress forms an unlikely friendship with the valet and his family. THE VALET has many laugh-out-loud moments, with an uplifting church scene and a positive message about the importance of family and genuine relationships, but it also has a staged sex scene meant to fool two private detectives, some crude and lewd humor, 21 obscenities and profanities, and a scene of drunkenness.

Movie star Olivia Allan is a movie star romantically involved with a married billionaire, Vincent Royce. Olivia has a regular clandestine rendezvous with Vincent. She gives Vincent an ultimatum to leave his wife. He tells her once again that he’s waiting for the right time. Upset, Olivia runs off into the night and into the limelight of the paparazzi. An unsuspecting valet, Antonia, gets caught in the background of the photos.

Vincent wants to cover up his affair because, if his wife finds out, he will lose all his money. Meanwhile, Olivia is worried about the backlash of the affair ruining the opening of her new movie about the trailblazing female pilot Amelia Earhart. She and Vincent conspire to pay the valet, Antonio, to pose as Olivia’s boyfriend. Antonio accepts the job, in hopes that he can use the money to win back his estranged wife.

Antonio is an honest and hard-working forty-something year old immigrant who lives with his mother. His kindness and loyalty strike a chord in Olivia. Spending time with him and his family helps her to see the love of family and friends that’s missing in her life. At the same time, Antonio’s estranged wife rejects his family values. He takes out his frustration on Olivia by calling out her poor life choices. Has he gone too far and lost her friendship?

THE VALET has some great performances. Eugenio Derbez plays the valet as a lovable, funny “everyman,” who must overcome his insecurities to find a woman who appreciates him. Olivia, played by Samara Weaving, is a classic attention-seeking, Hollywood celebrity, who must find the true meaning of fulfillment in life, which is rooted in good values and kindness toward others. The pair form an endearing, unlikely friendship, which helps them both discover what really matters. There are plenty of moments in THE VALET where Christian themes of love, fidelity, and family, come into play. The movie also has an uplifting scene set in a church.

However, there’s a staged sex scene between the valet and the actress that’s designed to fool two private detectives. THE VALET also has some crude and rude sexual humor nearly 20 obscenities, (including two “f” words), two Jesus profanities, a scene of drunkenness, and a character who abuses prescription pills. So, MOVIEGUIDE® advises extreme caution.