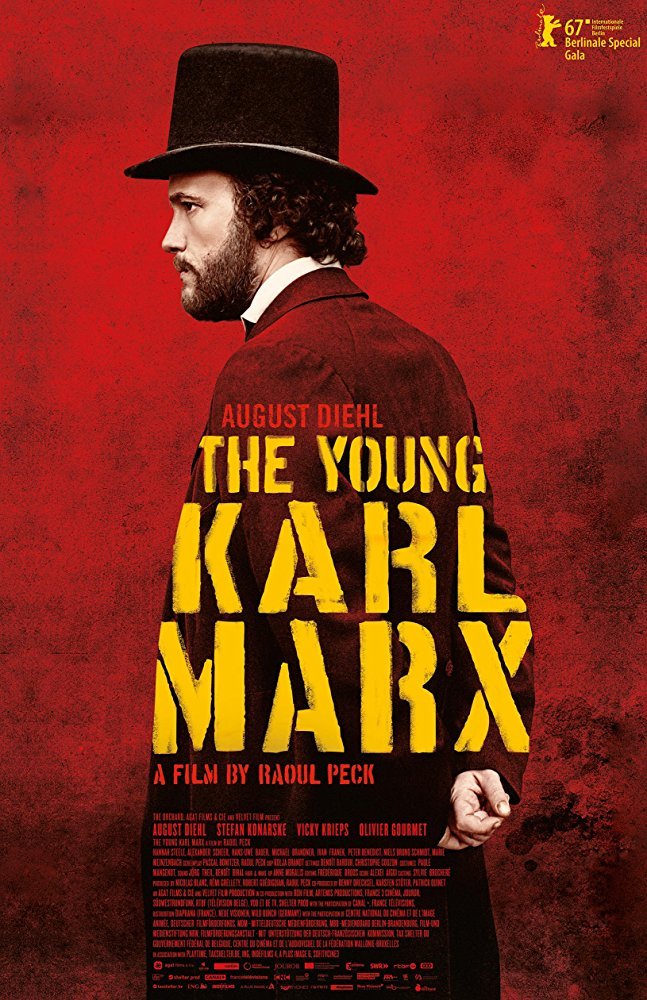 A French-German production, THE YOUNG KARL MARX introduces Karl Marx and his wife Jenny as Marx gets run out of German and travels to France. Cut to Friedrich Engels in one of his father’s factories in Manchester, England, where Engels is clearly embarrassed and upset by how harshly his father treats the workers. In France, Marx and Engels finally meet at a publishing benefactor’s house. Cagey toward one another at first, the men discover that they both love each other’s writing. A lifelong bromance and partnership begins. From there, the movie shows how Marx and Engels worked together and eventually helped found the Communist League in the summer of 1847. Then, in February 1848, they write and publish “The Communist Manifesto,” the political platform for the League.

(HHH, CoCoCo, AcapAcapAcap, SoSoSo, AbAbAb, APAPAP, RHRHRH, FeFe, LL, VV, S, N, AA, D, MMM):
Dominant Worldview and Other Worldview Content/Elements:
Very strong humanist, communist, anti-capitalist worldview lauding Karl Marx, the evil pseudo-intellectual “genius” behind formation of the Communist League in 1847and the mass murder of more than 153 million people in the 20th Century, with very strong pro-socialist content, very strong Anti-Christian content that overtly mocks and ridicules calls for kindness and gentleness as signs of sentimentality and weakness, very strong pleas for internationalism without borders, very strong revisionist history ignores Marx’s faulty economic, historical predictions and the mass murders that followed in the wake of the implementation of his evil ideology;
Foul Language:
four obscenities (including one “f” word) and six light profanities, plus drunken man vomits in the street;
Violence:
Men on horseback beat on people who are taking firewood from someone’s forest, men chased by police through streets, man knocked unconscious, and light newsreel footage depicting violence of street protests and street protestors throwing things, people in chains, but movie avoids newsreel footage of communists who murdered people;
Sex:
Implied fornication between married couple before camera cuts away from kissing in bed and father accuses adult son of pursuing “loose” women;
Nudity:
Upper female nudity as naked woman poses for an artist and upper male nudity in bedroom scene;
Alcohol Use:
Alcohol use and a scene of drunkenness;
Smoking and/or Drug Use and Abuse:
Smoking cigars; and,
Miscellaneous Immorality:
Very strong miscellaneous immorality such as Marx argues that since the middle class hates the workers it’s okay to hate the middle class, Marx and Engels call kindness and gentleness middle class values that aren’t helpful, Marx goes out of his way to insult other people,

THE YOUNG KARL MARX is a superficial, deceitful love note to Karl Marx, his friend Engels and their part in forming the Communist League in 1847, leading to the writing of “The Communist Manifesto.” A French-German production, THE YOUNG KARL MARX will mislead many moviegoers about the true nature of Marxism and the many evils that it spawned, which are ongoing even in today’s world.

The movie introduces Karl Marx and his wife Jenny as Marx gets run out of German and travels to France. Cut to Friedrich Engels in one of his father’s factories in Manchester, England, where Engels is clearly embarrassed by how harshly his father treats the workers. Engels befriends a female Irish worker and starts investigating the plight of the working class in England for a book.

Cut to France, where Marx and Engels finally meet at a publishing benefactor’s house. Cagey toward one another at first, the men discover that they both like each other’s writing. A lifelong partnership and mutual admiration society begins.

From there, the movie shows how Marx and Engels worked together and eventually helped found the Communist League in the summer of 1847. Then, in February 1848, they write and publish “The Communist Manifesto,” to be used as a political platform for the League.

The filmmakers behind THE YOUNG KARL MARX apply no critical thinking whatsoever to Marx and Engels or their writings. The movie is clearly a love fest, a propaganda piece that’s meant to promote Engels and Marx’s atheist, communist, anti-capitalist worldview. At the end of the movie, the filmmakers insert photos and film footage of workers and their families in the 1800s and early 1900s looking sad and poverty-stricken, then adding some brief footage from World War I, the stock market in the 1920s, the stock market crash in 1929, and images from the Great Depression. It then moves on to present images of Pres. Kennedy meeting Khrushchev of the Soviet Union, a shot of Che Guevara (the communist murderer and head executioner of Castro’s “revolution” in Cuba), street protests in the 1960s and beyond, in the 1980s, an image of President Reagan and British Prime Minister Margaret Thatcher, images of Nelson Mandela of South Africa, images of stock markets of more street protests, and, finally, an image of money burning. There were no images of communist leaders Stalin or Mao, the two biggest mass murderers in human history, even more so than Hitler.

The movie mostly concentrates on Marx’s anger toward the alleged exploitation of the worker class by “the bourgeoisie,” the class that owns most of the private property and wealth but that includes the middle-class. In the movie, Marx repeatedly argues that private property and “profit” are just meaningless, misleading terms for the exploitation of the working class by the bourgeoisie. He and Engels argue that only by abolishing private property, profit and money can the working class free themselves from the wage slavery they must endure to provide for their families. For the most part, the movie says nothing about the Marxist idea about worker “alienation” from their labor or the idea that the workers must seize the “means of production,” two crucial parts of Marx’s theories promoting communist socio-economic revolution and change.

Even more annoying, the movie totally skips over the evils that atheist communism created in the Soviet Union, China, North Korea, and Southeast Asia. By inserting a reference to Che Guevara, the filmmakers also ignore the murders and executions committed by Che in Cuba. These evils did not just come out of the blue. Terror, hatred and oppression were an important part of Marxist ideology from practically the very beginning.

Of course, THE YOUNG KARL MARX doesn’t mention any of the cogent critiques of Marx’s communist and economic ideology. For instance, his prediction that the revolution would first occur in Germany turned out to be wrong. Also, as British historian Paul Johnson points out in his brilliant books, Marx underestimated the capacity for reform in capitalist countries like Great Britain and the United States. By decrying Christian, moral, eternal values like kindness, gentleness, love, and brotherhood as sentimental bourgeois values he underestimated the power of such values to transform and soften the human spirit. By getting rid of God and promoting a “dictatorship of the working class,” Marx made the State into a God, and it was exactly this that, to a great extent, led to the communist evils that occurred in such countries as the Soviet Union, China and Cambodia. Engels and Marx’s desire to eliminate divisions between people living in towns/cities and people living in rural areas in “The Communist Manifesto” sped up that process. Marx and Engels also forgot the Christian doctrine of original sin, which states that, without Jesus Christ, human beings will never be able to curb, much less transform, the evil passions that lurk within the hearts of all people, whatever their social status.

Karl Marx abused and cheated constantly on his wife. He never bathed. He was always belligerent. Most of his children starved and died young or committed suicide. Karl Marx was the evil pseudo-intellectual “genius” behind the mass murder of more than 153 million people in the 20th Century

We could go on, but you get the point.