TRUE TO THE GAME 3

"Marred by Many Obscenities, Brutal Violence and Brief Muslim References" 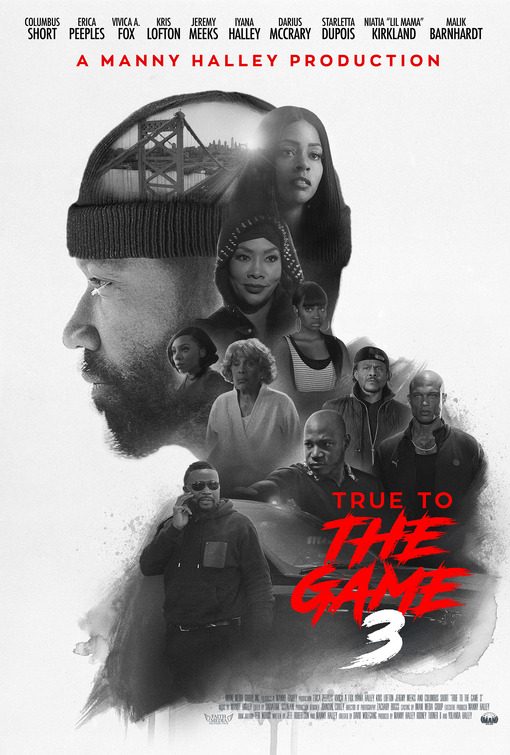 TRUE TO THE GAME 3 is the final movie in a trilogy of crime thrillers about a young woman and her lover. Gena is surprised to find her Muslim lover, Quadir, return from the dead a year after being shot a year ago by a drug dealer, Jerrell. Gena must return to Philly when Jerrell’s brother thinks Gena’s cousin had something to do with a drug heist. Eventually, the brother finds out that the cousin and Quadir’s sister were behind the heist. He decides everyone must die, including Gena’s sweet, tough Christian grandmother.

TRUE TO THE GAME 3 has a big cast. That slows down the plot in the first act. However, once the story, and the jeopardy, engages, this B crime thriller really gets cooking. The movie’s brightest part is that the Christian grandmother wears her faith on her sleeve. However, the heroine’s Muslim lover praises Allah in one scene, and they get married in front of a Muslim imam. TRUE TO THE GAME 3 has extensive foul language, including many “f” words, as well as some extreme, brutal bloody violence.

(B, CC, FR, LLL, VVV, S, NN, A, DD, M):
Dominant Worldview and Other Worldview Content/Elements:
Light moral worldview about stopping some evil drug dealers, with the heroine’s sweet but tough Christian grandmother wearing her heart on her sleeve, talking about doing the right thing, about God, about “the Lord,” and citing Scripture, but the heroine’s lover is Muslim and praises Allah in one scene and marries the heroine before a Muslim imam, but there are no specific Muslim doctrines mentioned otherwise
Foul Language:
At least 203 obscenities, two GD profanities, three light profanities, many “n” words by black people, and woman gives police a “double-barreled” obscene gesture with her middle fingers
Violence:
Some extreme, brutal bloody violence and strong violence include implied torture, depicted torture when a villain uses a pair of pliers to pull out a victim’s tooth, a woman tied up (with blood around her neck and head, implying some torture) is deliberately shot in her calf and then shot dead in the head, thug enters elderly woman’s apartment with a small sledgehammer, and police later report the woman had fatal blunt force trauma on the back of her head, a shootout occurs at the end, woman thug and male thug quickly shoot it out and both die, good cop and bad cop shoot it out but good cop survives, flashbacks show men fighting and woman with hood over her face firing at a man while robbing a drug shipment, and death
Sex:
Implied fornication when unmarried couple wake up together in bed, woman getting married is shown to be pregnant, and two scenes show skimpily dressed women dancing and wearing thongs
Nudity:
Rear female nudity when dancing women are wearing thongs and some upper male nudity
Alcohol Use:
Some alcohol use
Smoking and/or Drug Use and Abuse:
No smoking but story involves evil drug dealers; and,
Miscellaneous Immorality:
Women lie to heroine’s Christian grandmother, women refuse to help police and talk to them about drug shipment they stole, and one cop is corrupt but others are not.

TRUE TO THE GAME 3 is the final movie in a trilogy of crime thrillers about a young woman and her lover, who returns from everyone thinking he was dead and hiding, and kills her attacker, a drug dealer who almost killed the lover a year ago, but the couple and their families are still in danger from the drug dealer’s brother and his cohorts. Despite a slow, complicated start, TRUE TO THE GAME 3 delivers a tight, exciting plot with lots of jeopardy overall, but the movie contains constant strong foul language and extreme violence, and the hero is a Muslim, though the heroine’s grandmother is a strong Christian who cites Jesus and the Bible before she’s martyred.

The movie picks up where the second movie left off, after Gena’s Muslim lover, Quadir, saves her life in Malibu from the drug dealer, Jerrell, who shot him a year ago. The drug dealer, Jerrell, had followed Gena out to Los Angeles and posed as someone else. He suspected Gena was connected to a heist of a big drug shipment engineered by Qaudir’s sister, Shoog, and Gena’s cousin, Bria.

As the movie opens, Qaudir is waking up Gena after he tended to their wounds from the altercation with Jerrell and dumped the body in the ocean. Quadir tells Gena that Allah saved his life, but Gena’s angry that he let her believe he was dead for a year. However, he explains to her that it took him months to recover, and he needed to protect himself and her from Jerrell.

Back in Philly, though, Jerrell’s brother shows up wondering what happened to the drug shipment and asking why Jerrell isn’t answering his phone. With help from Jerrell’s right-hand man, Saleem, they narrow the suspects down to Gena’s cousin, Bria, and Gena, though Gena had nothing to do with stealing the shipment. They ask Bria’s on-again, off-again boyfriend to try to find out from Bria where Gena is.

Meanwhile, a corrupt cop named Joe has an informant, Titus, in Saleem’s gang. Joe hopes to arrest some drug dealers and grab some drug money in the process. However, Saleem and Jerrell’s brother, Terrell, starts suspecting they have an informant, so they start torturing and beating up people to find him.

To move the plot along, the filmmakers have Bria accidentally shoot her boyfriend, Dalvin, when she sees he has a gun in his car, and she tries to take it away from him. That brings Joe and his partner to the hospital where Dalvin’s recovering. They take Bria to the precinct to interrogate her, and that brings Gena back to Philly, but Quadir stays in Los Angeles. Joe knows from Titus that Terrell believes Bria and Qadir’s sister, Shoog, might be involved in the drug shipment heist. He wants them to work with him to get Terrell and the rest of the drug gang, but they refuse to say anything.

More torture and investigation by Terrell and Saleem reveal not only that Titus is the informant, but also that Bria and Shoog were behind the drug shipment heist. Terrell decides everyone must die, including Gena’s sweet but tough Christian grandmother.

Based on a series of popular novels or potboilers, TRUE TO THE GAME 3 has a big cast. That slows down the plot development in the first act. However, once the story and the jeopardy engage, this B crime thriller really gets cooking. That said, the filmmakers still need to invent a silly plot device, Bria accidentally shooting her boyfriend, to drive the plot forward.

The movie’s brightest part is Starletta DuPois’ performance as the elderly, wise Christian grandmother. The grandmother wears her Christian faith on her sleeve. For example, when the hero’s sister, who created all the problems for the grandmother’s family by organizing the drug heist, tries to plead with her to leave her apartment for her own safety, the grandmother tells her that God has kept her safe for 40 years in that apartment, and she’s not going to let anyone make her leave now.

However, in the movie’s first scene, the Muslim hero briefly praises Allah, and, at the end of the movie, marries Gena in a private ceremony led by a Muslim imam. The grandmother’s Christian references are much stronger than these Muslim references, but none of the grandmother’s other family member express any commitment to Jesus or Christianity. So, the ending to Gena and Quadir’s story ends with an implied validation of Islam.

The movie’s other standout performance is Darius McCrary from the great 1990s family TV sitcom FAMILY MATTERS playing the corrupt cop. Though a little over the top, it was a fun performance. It deserves a mention.

TRUE TO THE GAME 3 also has extensive foul language, including many “f” words, as well as some extreme, brutal bloody violence. This may be related to the movie’s modern drug gang plot, but it’s excessive and ultimately unacceptable.