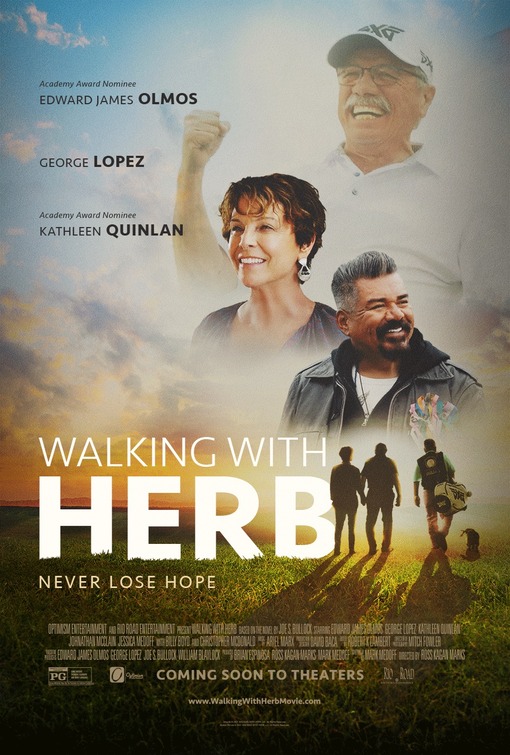 WALKING WITH HERB is a whimsical, lighthearted, well-acted comedy. The second half is especially good. It has lots of charm and humor, and ends on a satisfying, uplifting note. WALKING WITH HERB has a strong Christian, moral worldview. It stresses overcoming doubt and disappointment with faith in God and being obedient to God. The movie also has an uplifting message about helping and inspiring other people. WALKING WITH HERB contains some references to Buddhism and Judaism, however; MOVIEGUIDE® advises caution.

(CC, BB, FR, PC, PP, CapCap, L, V, M):
Dominant Worldview and Other Worldview Content/Elements:
Strong Christian, moral worldview about regaining faith in God and overcoming doubt and anger toward God, with positive Christian references including Crosses, God sends a dove to deliver message to main character who’s lost his faith in God but regains it by being obedient to God and fulfilling his nature to be loving and kind, one character appears to be an angel of some sort and says he’s a messenger form God, kindness and love and generosity are also promoted, marred by some references to Buddhism and Judaism and an “inclusive” politically correct subtext in three or so scenes regarding religion (including a reference to Buddha in one scene and a Buddhist symbol appears and reappears as do Cross symbols and a Star of David), plus strong Pro-American, pro-capitalist elements include an American soldier dies for his country, and a bank manager is a positive figure but he’s also a generous man who believes in helping other people through the bank
Foul Language:
No obscenities, but one light profanity, but said in a gentle manner
Violence:
Golfers get angry and pound their clubs when they miss a stroke
Sex:
No sex, but married couple kisses
Nudity:
No nudity
Alcohol Use:
Implied wine drinking
Smoking and/or Drug Use and Abuse:
No smoking or drugs; and,
Miscellaneous Immorality:
Main character has lost his faith in God and God’s love because of two family tragedies, but he regains his faith after God gives him a mission, and he starts trusting in God as he works to fulfill that mission and applies love and kindness.

WALKING WITH HERB is a comical faith-based movie about a 65-year-old bank manager who loses his faith in God because of the death of his granddaughter, but who gets a second chance when God gives him an assignment to win an eccentric billionaire’s $300 million golf tournament to be the golf champion of the entire world. WALKING WITH HERB is a whimsical, lighthearted, funny comedy about restoring faith in God by being obedient to Him, with an uplifting message about helping and inspiring other people, but there’s some universalism with a general references to Buddhism and a comical aside about someone being “inclusive.”

The movie opens in Las Cruces, New Mexico, with Joe Amable-Amo and his wife, Sheila, celebrating the birth of their granddaughter with their daughter and her husband, a military man serving overseas. However, the husband dies overseas, then the granddaughter gets sick and dies too. As a result, Joe has become extremely bitter toward God, to the point of nonbelief, even though his wife remains strong in her own Christian faith.

Meanwhile, the mortgage for the nonprofit school for homeless children that Joe’s daughter runs is in danger of being foreclosed by the bank Joe manages. In fact, a bank examiner is coming in two days to order Joe to foreclose on the school’s mortgage.

As Joe ponders what to do about his daughter’s mortgage, he gets messages from God through his computer and his printer. Joe is skeptical, but a little long-haired dachshund shows up with a note that he will be visited by a white dove at his office window that will wink at him. After this miracle occurs, the movie cuts to Joe talking to his wife about the messages. He tells her that God wants him to enter and win a $300 million tournament by an eccentric billionaire to choose the golf champion of the entire world. The dove from before appears and leaves Joe a note. The note turns out to be the drawing of a map, which tells Joe to bring his clubs to the place marked on the map.

When Joe gets to the place, he meets an angel from God named Herb and the little dog, whose name is Sandwich, according to Herb. Herb starts working with Joe on his golf game. He tells Joe his job is to get Joe to trust and believe, and Joe’s job is to strengthen his faith, even though he hasn’t played golf in 35 years.

Being an amateur, Joe must qualify for the world championship tournament by winning one of the top two spots in a qualifying golf tournament. First, however, he must become the club champion of the local professional golf course.

WALKING WITH HERB is a whimsical, lighthearted, well-acted comedy. It starts off a little silly, but the second half is especially good. It has lots of charm and humor, and ends on a satisfying, uplifting note. Joe’s young opponent in the big tournament, Archie, played by Billy Boyd, is angry and upset he has to compete play against Joe, a 65-year-old amateur, played by the great James Edward Olmos. However, Joe wins him over with his positive, charming, caring attitude. The filmmakers and actors take full advantage of the golf tournament setting that takes over the story in the movie’s second half.

WALKING WITH HERB has a strong Christian, moral worldview. It stresses overcoming doubt and disappointment with faith in God and being obedient to God’s call on your life. The movie also has a strong, inspiring moral message about helping and inspiring other people. It isn’t just faith that overcomes doubt and disappointment. Love and kindness also helps. The movie also promotes generosity and helping needy children.

Despite all this, there’s some universalism in the story. For example, a comment is made about being “inclusive,” because the collar on Herb’s little dog has several charms on it, including a Crucifix, a Star of David, a peace symbol, and a Dharma Wheel, a Buddhist wheel with eight spokes on it that can represent Truth and Law but also represents “the eightfold path” of Buddhism. There is also a reference to Buddha in one line of dialogue. In other scenes, one wall in Joe’s house has a bunch of Crosses on it, his wife prays to God before the Crosses, and God sends a dove four times to give Joe and his wife a sign. Finally, a man working for Joe wears a Jewish yarmulke in several scenes, and he eventually becomes a romantic interest for Joe’s daughter, whose military husband died overseas. So, MOVIEGUIDE® advises some caution for the Non-Christian elements in WALKING WITH HERB, especially for media-wise Christian viewers and their families.