WHITNEY HOUSTON: I WANNA DANCE WITH SOMEBODY

"The Triumphant Rise and Sad Fall of ‘The Voice’" 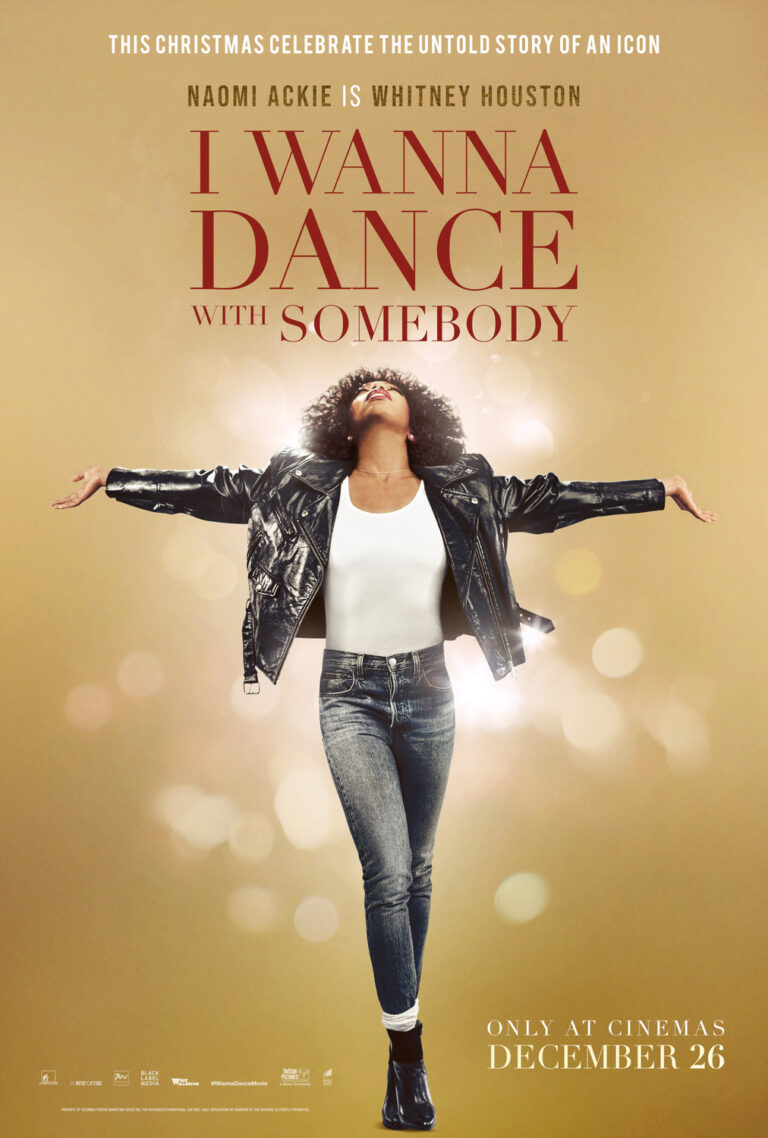 WHITNEY HOUSTON: I WANNA DANCE WITH SOMEBODY is a musical biopic of the late pop singer. It focuses on her personal and professional triumphs, trials and tribulations. As a teenager, Whitney sings in church and as backup for her mother’s nightclub act. However, it comes time for Whitney to take center stage. Clive Davis, a famous record producer, signs Whitney to produce records, and they create the biggest hits for a black female pop star. Whitney’s personal life gets in the way, when she and her husband start fighting and abusing alcohol, cocaine and pills.

WHITNEY HOUSTON: I WANNA DANCE WITH SOMEBODY tells a story of triumph and tragedy. Naomi Ackie delivers a dynamic, superlative performance as Whitney. Another excellent performance is Stanley Tucci playing Clive Davis, Whitney’s record producer and friend. Chemistry seems to be lacking, however, between Ackie and Ashton Sanders, who plays her husband. I WANNA DANCE WITH SOMEBODY whitewashes some aspects of Whitney’s behavior and has excessive foul language. There’s also a politically correct depiction of Whitney’s brief lesbian fling with her best friend, who became her personal assistant.

(BB, CC, Ro, HoHo, PC, RH, Ab, LLL, V, SS, AA, DD, M):
Dominant Worldview and Other Worldview Content/Elements:
Strong moral worldview about famous title character’s God-given talent, with some references to church and faith, which also shows the dangers of fame, fortune and substance abuse, marred by some Romantic, homosexual elements that seem to side with the title character’s lesbian friend where the title character as an older teenager kisses her female friend, and the two cuddle together while clothed in the friend’s apartment, but the title character ends the relationship when she has the chance to become a huge pop star (the movie suggests the title character was under social, family pressure to end the relationship, but some evidence suggests she really didn’t want to continue the affair but really wanted to have a normal family), so there’s some revisionist history in the biography, and the movie seems to mock indirectly a comment by the title character that she thinks God is going to send people engaging in homosexual immorality to Hell
Foul Language:
29 obscenities (including one “f” word and multiple “s,” “d,” “h” and “a” words), four GD profanities and 12 light profanities (mostly OMG)
Violence:
The title character appears with bruises on her face, implying that her husband has been beating her
Sex:
Title character as an older teenager kisses another woman who’s three years older and they and are shown mildly cuddling together in an apartment while wearing clothes, but shortly later the title character abruptly ends the relationship when she has the chance to become a big pop singer
Nudity:
No nudity
Alcohol Use:
Alcohol use, some drunkenness and implied addiction
Smoking and/or Drug Use and Abuse:
Some smoking, two young women smoke a marijuana bong in one scene, woman snorts cocaine in another scene, and woman years later is seen having become a drug addict and eventually dies from an accidental overdose, plus two scenes where title character makes a drug connection with a long-haired white man asking for an autograph but slipping her some cocaine during the interaction while she slips him some cash; and,
Miscellaneous Immorality:
Husband and wife have a loud verbal argument, father mismanages title character’s finances, and people are spendthrifts.

WHITNEY HOUSTON: I WANNA DANCE WITH SOMEBODY is a biopic of the late pop singer Whitney Houston and focuses on her triumphs, trials and tribulations, all of which sadly, in one way or another, led to her tragic death due to a quote “accidental drug overdose” unquote, but the movie also has some positive references to Whitney’s Christian background and ongoing faith. I WANNA DANCE WITH SOMEBODY has a dynamic, superlative performance by Naomi Ackie as Whitney, and another excellent performance by Stanley Tucci as music producer Clive Davis, but it whitewashes some aspects of Whitney’s behavior and has lots of strong foul language, some mostly implied references to Whitney’s drug abuse and depictions of Whitney’s brief lesbian relationship with her best friend, an immoral relationship that Whitney rejected more strongly than the movie suggests.

The movie follows Whitney as she sings in church and nightclubs under her mother, Cissy’s, tutelage. Cissy is a professional singer in her own right, but she never achieved the heights of stardom her daughter did. A senior in high school, Whitney is on the verge of becoming a professional singer. However, although she and her family go to church, Whitney has been having a lesbian relationship with her best friend, Robyn Crawford, who’s started college. The two are shown kissing and smoking a marijuana bong in one short sequence.

Whitney’s budding singing career attracts the attention of Clive Davis, the head of Arista Records. Davis is impressed with her singing, and he offers Whitney a record contract in April 1983, four months before her 20th birthday. However, as she begins working with Davis, Whitney beaks off her relationship with Robyn. She tells Robyn she’s worried about going to Hell because of their illicit relationship. The movie implies there’s also been some pressure from her mother to break off the relationship, though the two young women remain friends.

Whitney’s first album in 1985 becomes a huge hit, generating three Number One hits. She hires her friend Robyn as her personal assistant and her father as her manager. Behind the scenes, as her record career continues to soar, Whitney tells Robyn she wants to marry a man and have a family. After dating several celebrities, including Eddie Murphy, she begins seeing popular singer Bobby Brown in 1989. They get married three years later, a year after Whitney gives a stunning performance of the national anthem at the Superbowl.

Whitney decides to start making movies, and her 1992 debut, THE BODYGURD with Kevin Costner, becomes a huge hit. It also generates a Number One hit album and a Number One hit single for Whitney, a cover song of Dolly Parton’s 1974 hit, “I Will Always Love You.” The album won the 1994 Grammy Award for Album of the Year. Meanwhile, in 1993, Whitney and Bobby have a baby daughter, Bobbi Christina.

In the late 1990s, Whitney and her husband begin having more serious problems. One scene shows a battered Whitney, who’s been beaten by her husband. Their alcohol and drug use and tumultuous marriage receive widespread media coverage. She starts to miss scheduled performances and in the early 2000s learned that her father had been mishandling her money.

The rest of the movie shows Whitney trying to recover from her abuse of alcohol, cocaine and pills. Despite a six-year recording lull, she releases her final album in 2009. The album reaches Number One, her first since the BODYGUARD album, but Whitney’s drug and alcohol abuse has taken a toll on her beautiful singing voice.

WHITNEY HOUSTON: I WANNA DANCE WITH SOMEBODY tells a story of triumph and tragedy. Naomi Ackie delivers a dynamic, superlative performance as Whitney. The movie uses Whitney’s voice during the musical numbers, but the viewer can see that, in the musical numbers, Ackie is fully invested in singing the songs like Whitney sang them. Another excellent performance is by Stanley Tucci as Clive Davis, Whitney’s long-time record producer and friend.

That said, the chemistry between Ackie as Whitney and Ashton Sanders as Bobbi Brown seems to be lacking, leaving viewers to wonder what Whitney saw in him. Also, the movie whitewashes some aspects of Whitney’s behavior. Reportedly, Whitney sometimes could be mean and petty in her personal dealings, like many celebrities who let fame go to their heads. Whitney reportedly began her cocaine habit in high school when she met Robyn Crawford, who was three years older. Apparently, it was Whitney’s mother, Cissy, who demanded, in the early 1980s, that Whitney stop abusing the drug and end her relationship with Robyn.

WHITNEY HOUSTON: I WANNA DANCE WITH SOMEBODY also has lots of strong foul language. Thankfully, the scenes of alcohol and drug abuse are kept to a minimum. In the end, the filmmakers focus on the bright legacy of Whitney Houston’s talent and artistry, which gave pleasure to millions, if not billions, of people around the world. To celebrate that, the movie focuses on Whitney’s acclaimed performance at the 1994 American Music Awards.

Watch WHITNEY HOUSTON: I WANNA DANCE WITH SOMEBODY: