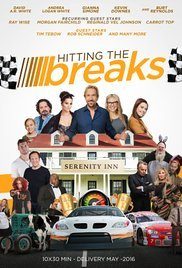 After a career-ending crash, former racecar driver Randy Wilcox moves his wife Charlie, and two daughters Darcy and Delancey, from Atlanta to a small town in Colorado, where he’s inherited his estranged father’s bed and breakfast, Serenity Inn. In the first episode, the family struggles with the eccentric townsfolk and learn that Randy’s drunkard, gambling father may have had a change of heart before his death.

The basic story of HITTING THE BREAKS is interesting, and the setup for the first episode has great potential. The jokes don’t always land, but the characters are quirky and have funny moments. The funniest character is Bernie, the inept, but well-meaning, small town police officer who clearly takes inspiration from Barney Fife of THE ANDY GRIFFITH SHOW. In this pilot episode, the townsfolk hint at the redemption of Randy’s father, which comes to a conclusion as Randy finds a journal in his desk back at the inn. The voice over of the journal reveals that Randy’s father is played by Burt Reynolds and may bring some healing to Randy’s broken relationship he had with his father.

(CCC, BBB, V, M) Dominant Christian worldview, main family goes to church, pray before meals, sheriff of town asks family to come to church, father of main character describes redemption in journal entries, moral elements, family is important, lying is condemned; no foul language, but some crude humor, girl says she has bug bites in places she can’t scratch in public, bathroom described as smelling like a “diaper truck,” phrase “holy fire heck” used, townsfolk think main character wouldn’t know “the inside of a church from a drunken squirrel”; some slapstick comedy, intense car accident described in comical terms, man is hit with a frying pan and falls off roof; no sex; no nudity; no alcohol use; no smoking or drugs; and, main character had dysfunctional relationship with father, father described as a drunkard and a gambler, man is convinced by other men to deceive his wife, and family complains about their living conditions in old inn.