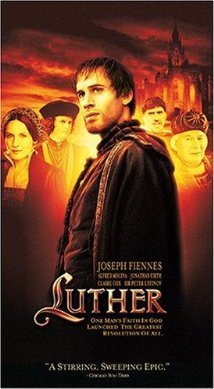 The movie LUTHER covers the early years of Martin Luther’s life, from his days as a monk in the early 1500s to the proclamation of the Augsburg Confession in 1530, which founded the Lutheran Church in Germany. It is a wonderful, entertaining historical drama that, despite some flaws, shows how one man’s faith in God changed the history of the world.

(CCC, BBB, Ab, PC, LL, VV, S, N) Very strong Protestant Christian and Lutheran Christian worldview extolling Martin Luther, the founder of the Lutheran Church and the Protestant Reformation with some support of and some mocking of other religious figures, especially Roman Catholic priests and cardinals who support the practice of indulgences and who attack Luther and his supporters for heresy, and movie presents Pope Leo X as a failed leader, especially when compared to Luther in one scene, as well as a possibly politically correct emphasis of the Luther’s impact on the concept of religious freedom, which may seem exaggerated at several points toward the end; nine obscenities, one light exclamatory profanity, and several anguished cries to God and Jesus; peasants riot in several scenes and some images of burned bodies and dead people, including one man whose arm was cut off, but nothing gory or excessive; Roman Catholic priests in Rome are seen going into buildings with prostitutes, brief talk about the marriage bed when Martin Luther decides to marry and crisis interrupts amorous married couple lying clothed in bed; pencil drawing mocks Cardinal who has a harp stuck in his rear end; no drinking; no smoking; and, religious zealotry leads to violence among Roman Catholics and nascent Protestants, ecclesiastical corruption in the Roman Catholic church, Roman Catholic leaders sew spiritual fear so they can sell salvation and release from Purgatory to poor peasants, a representative from the Roman Catholic pope tries to bribe a German prince with a relatively cheap golden rose, and friends of Luther kidnap him before Roman Catholic supporters can murder him.

At one important point in the movie LUTHER, a wonderful, entertaining historical drama about the life of the 16th Century Protestant reformer Martin Luther, Luther admits to the German Emperor that he may have been too harsh when attacking some of the Roman Catholic leaders. Later in the movie, in fact, he realizes, and painfully regrets, that some of his actions in support of controversial ideas have led to many deaths during the peasant revolt in Germany, which was inspired by his writings and fed by the intemperate zealotry of some of his supporters.

At the same time, however, the Luther presented by this movie returns several times to the central issue that occupied his mind, and changed the world: the primacy of God’s Word, the Bible. “Unless I am convicted by Scripture and plain reason. . . I will not recant,” Luther tells the German and Catholic authorities accusing him of heresy. “My conscience is captive to the Word of God.” For history tells us it was the demands of study for academic degrees and preparations for delivering lectures as the teacher of biblical theology at Wittenburg University that led Luther to study the Scriptures in depth. His study of the Bible, the source of Christianity, convinced him that the Church had lost sight of the central truths of the faith: Sola Scriptura!

The movie LUTHER covers the early years of Martin Luther’s life, from his days as a monk in the early 1500s to the proclamation of the Augsburg Confession in 1530, which founded the Lutheran Church in Germany. It begins with the thunderstorm that led Luther to cry out to St. Anne, the patron saint of miners like his father, “Help, St. Anne! I’ll become a monk.”

At the monastery, Luther is wracked by guilt because he feels completely unholy in the face of the God of Justice. His mentor orders him to pursue an academic career to relieve the strain. Soon, however, the young theology teacher is trying to correct the corrupt Catholic Church in Rome, whose corruption Luther saw first-hand. He begins teaching his students and the people in Wittenburg about the mercy and compassion of God, while complaining about the Church selling forgiveness of sins to the people for money.

All of this angers the Pope and many of his officials, who are trying to collect money to build St. Peter’s Basilica in Rome. They charge Luther with heresy, and the climax of the first half of the movie occurs when Luther refuses to renounce his writings, unless convinced by Scripture.

Joseph Fiennes does an excellent job of portraying this revolutionary historical figure, whose Protestant Reformation clearly led to the founding of America and the establishment of representative government in both England and the United States. Although he appears to be a bit too thin and young by the end of the movie, there are surviving portraits of Luther from the early 1520s when most of LUTHER takes place which approximate Fiennes’ features. Supporting Mr. Fiennes, as Luther’s supporter, Prince Frederick the Wise, is the legendary, always enjoyable Peter Ustinov, star of such classic historical movies as SPARTACUS and the great QUO VADIS.

Director Eric Till, who also did the MOVIEGUIDE® Award-winning TV program BONHOEFFER: AGENT OF GRACE, does a marvelous job of capturing the settings and atmosphere of 16th Century Germany and Italy. The movie is engrossing throughout, even though the high points and climax in the second half of the movie don’t match the powerful drama of the scenes where Luther refuses to recant.

MOVIEGUIDE® can find little or nothing wrong, factually speaking, with the historical portrayal of this part of Luther’s life, but LUTHER is told from a Lutheran, Protestant viewpoint. Hence, the movie may offend Roman Catholics, especially when Luther cracks some jokes about the Catholic leaders he opposes, including Pope Leo X. The ending of the movie also has one cardinal complaining, at Leo’s death, that, if Leo had been more like Luther, perhaps Roman Catholicism could have been reformed. Of course, after Leo’s death, the Catholic Church did indeed undergo reform within the movement known as the Counter-Reformation.

LUTHER clearly shows that Martin Luther’s career led to an increased respect for the mercy of God and the importance of God’s Word, the Bible. It also informs viewers, in an end credit, that Luther helped spread a new understanding of religious freedom throughout Europe. This is true, but only to a certain extent, because, for the next 150 years or so after Luther’s death, Europe was gripped by religious wars in the wake of the Protestant Reformation. In other words, a schism in a church can be an awful thing, especially when it leads to violence, although we are called by Scripture to stand for the Truth when absolutely required.

Regrettably, the movie says little about the other great foundation of Lutheran and Protestant belief – that each and every Christian is saved, and justified or declared righteous, by God’s grace through faith, not by works. This is a failing in LUTHER, even though the movie correctly and boldly stresses faith in God through Jesus Christ.

In the final analysis, LUTHER is must watching, because it shows, in a compelling and dramatic fashion, how Luther’s faith in God changed the history of the world. LUTHER is an entertaining, powerful portrait of the Truth that people of all faiths will appreciate and enjoy. It is one of the best movies of 2003.