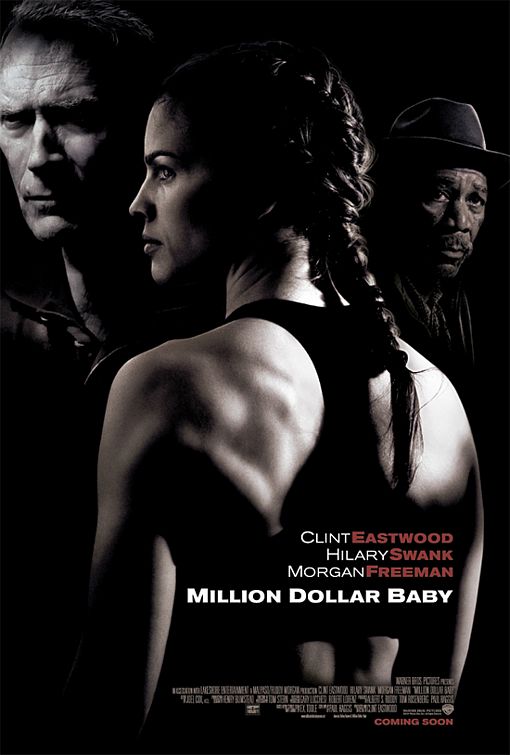 Directed by Clint Eastwood, MILLION DOLLAR BABY stars Clint as an aging boxing trainer with a boxing gym in Los Angeles who reluctantly trains a determined 31-year-old woman from the Ozarks. Estranged from his daughter, Frankie finds himself becoming a father-figure to Maggie, played by Hilary Swank. As Maggie rises to the top of her profession, tragedy strikes. Frankie and Maggie must face the battle of their lives. Morgan Freeman plays Frankie’s friend Scrap-Iron, a retired ex-boxer who works as Frankie’s janitor. Scrap-Iron narrates the story, which is based on a short story from F. X. Toole.

MILLION DOLLAR BABY is a well-directed argument for euthanasia in the tradition of the heinous Nazi movie I ACCUSE. Shot in a film noir style, the movie contends that being talented is never enough, and that when the roar of the crowd is over, we might as well help the handicapped die before they have an opportunity to know the Good News of Jesus Christ. Although Clint Eastwood’s character prays a couple times and goes to church, he questions the Trinity and, in fact, Heaven and Hell! The movie is also spoiled by strong foul language and a mean-spirited, contradictory priest character.

(HH, C, B, FR, LLL, VV, N, A, D, M) Strong Humanist worldview that ultimately rejects life and portrays a priest as rude, coarse and insensitive and the Christian faith as not having the answers to life's most important problems with numerous deceptive Christian and moral elements, including prayers and visits to church and chapel, but containing some rough foul language and evil euthanasia theme, as well as false religious elements where Roman Catholic priest gives modalistic answer to question about the Holy Trinity and one scene where priest appears to talk legalistically about losing one’s salvation; 28 obscenities (including priest utters an “f” word), eight strong profanities, five light profanities, and man appears to mouth a couple “f” words during intense boxing sequence with very loud crowd; strong boxing violence includes trainer fixes several cuts and twists broken nose back into shape and one boxer fights very dirty (which makes the other fighter try to fight dirty at one point too in order to survive), and young man tries to beat up another, defenseless retarded young man while older man is not looking, so older man has to knock him out to teach him a lesson; brief alcohol use; smoking; and, euthanasia theme and negative portrayal of mother but daughter fondly remembers her own father.

Directed by Clint Eastwood, MILLION DOLLAR BABY also stars Clint as an aging boxing trainer and “cut man” with a boxing gym in Los Angeles who reluctantly trains a determined 31-year-old woman from the Ozarks. Estranged from his own daughter, Frankie Dunn finds himself becoming a father-figure to Maggie Fitzgerald, played by Hilary Swank. Maggie lost her own father years ago, so the surrogate parent-child feelings are mutual. As Maggie rises to the top of her profession, tragedy strikes. Frankie and Maggie must face the battle of their lives. Morgan Freeman plays Frankie’s friend Scrap-Iron, a retired ex-boxer who works for Frankie as a janitor. Scrap-Iron narrates the story, which is based on a short story from F. X. Toole’s collection ROPE BURNS.

Shot in a heartfelt film noir manner, MILLION DOLLAR BABY is a well-directed argument for euthanasia in the tradition of the heinous National Socialist German movie I ACCUSE. Eastwood, Swank and Freeman are all brilliant in their respective roles. Jay Baruchel delivers a nice touch as a mentally handicapped young man who thinks he can box. His story provides some important insights into the story surrounding the three main characters. Their dramatic story is sprinkled with many humorous and exciting moments.

MILLION DOLLAR BABY has a strong humanist, somewhat cynical worldview, however. Set in a dark complicated world, the movie contends that being tough and talented is never enough, and that when the roar of the crowd is over, and the fame fleets, we might as well help the handicapped die before they have an opportunity to know the Truth of the Gospel of Jesus Christ that would set them free from the bondage to the fame that possessed them. Although Clint Eastwood’s character prays a couple times and regularly goes to church, he questions the Trinity and, in fact, Heaven and Hell!

Eastwood pulls no punches in his movie. There is no hope in the movie that God is sovereign or even available to comfort the weak and redeem the lost. Eastwood does not sugarcoat the potential dangers of the rough boxing world nor the realities of murder, and there is no justice for the murderer. Even so, there is a constant stream of sugarcoating the deeds of men in the narration by Morgan Freeman as Scrap-Iron, even in the movie’s vile ending.

People and situations irritate Frankie, sometimes to the point of taking Jesus Christ’s name in vain. Frankie also struggles with the doctrines of his Catholic faith and challenges his priest to provide answers. Regrettably, the priest does not provide satisfying answers. In one scene, the priest even gives a modalistic answer to Frankie’s questions about the Holy Trinity.

Modalism is a heresy that teaches that God is one person who manifests Himself in three aspects, the Father, Son and Holy Spirit. Instead of drifting into modalism, Frankie’s priest should have told Frankie that God is one eternal being but three persons, or three Whos. This does not mean that God is both one person and three persons. It means that God exists as one What, or one being with one substance, and three Whos, or three persons. This explanation can be seen perfectly in Matthew 20:28, where Jesus tells the apostles to baptize disciples in the “Name of the Father, Son and Holy Spirit.” There are three divine persons in that sentence but only one divine authority (the word Name is a kind of metaphor that means authority).

The movie also could have resolved the Trinity question in the last act by having Frankie turn to his priest in their final meeting and give him the correct answer. Such a scene not only would correct the false teaching, it also would show important spiritual growth in Frankie’s character.

In addition to some strong profanities, MILLION DOLLAR BABY makes the case for euthanasia, and, in doing so, that clearly and obviously violates God’s command to protect human life. Thus, the movie may lead uninformed viewers astray.

In the late 1930s, Adolf Hitler’s National Socialist regime of terror in Germany produced pro-euthanasia propaganda, including books, pamphlets, posters, and movies. As the British documentary SELLING MURDER: THE KILLING FILMS OF THE THIRD REICH (Domino Films) shows, one of the most popular and most effective Nazi propaganda movies was I ACCUSE or ICH KLAGE AN!, based on MISSION AND CONSCIENCE, a popular novel published in 1936 by a medical doctor, Helmet Unger. The movie shows a sympathetic husband defending himself against a murder charge based on the mercy killing of his terminally ill wife. I ACCUSE changed the minds and the votes of the German people from overwhelmingly against so-called “mercy killing” to in favor of the euthanasia that ultimately led to the killing of millions of Jews.

Thus, although MILLION DOLLAR BABY contains strong positive content (including no sex scenes!), it qualifies for an abhorrent, or Minus Four, under MOVIEGUIDE®’s biblical standards for moral, theological and philosophical content (see our CONTENT section above).