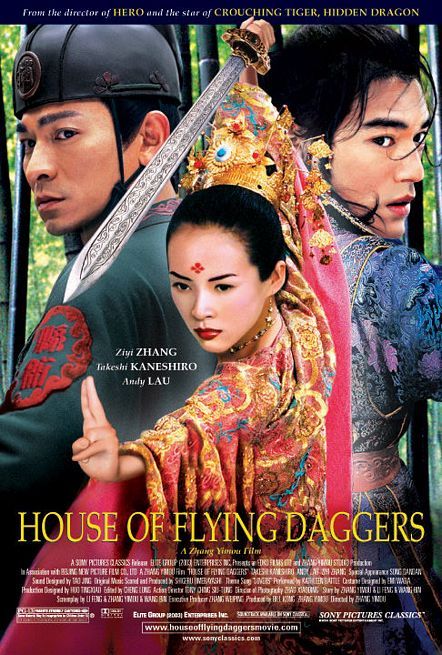 HOUSE OF FLYING DAGGERS is a sumptuous looking, pulse pounding martial arts action epic from China, set in 895 A.D. Two of the corrupt Tang Dynasty’s best men, Captains Leo and Jin, are searching for the new leader of a rebel group calling itself House of the Flying Daggers. They hatch a plot involving the old leader’s beautiful blind daughter that they hope will help them finally destroy the House of Flying Daggers.

An overly melodramatic ending almost wrecks HOUSE OF FLYING DAGGERS, but the movie is so exciting, lusciously beautiful, and dynamic that forgiving viewers may overlook the old-fashioned, slightly corny ROMEO AND JULIET ending. The movie is full of sumptuous looking action sequences, with some blood, and an unforgettable, gorgeous dance sequence. HOUSE OF FLYING DAGGERS shows what can happen when three people get caught up in an epic civil war in their beloved country. Love and honor defeat treachery and jealousy, but not without tragic consequences. That’s the tragedy of most civil wars, even when the good side, or the best side, wins. The movie’s humanist worldview subtly combines Romantic and moral elements in a provocative, but not offensive, way.

(H, Ro, B, L, VVV, S, AA, M) Light humanist worldview with Romantic and moral elements handled in a subtle manner that is provocative rather than overtly offensive; two or three obscenities; much action violence with some blood includes some martial arts fighting, much sword fighting, many daggers thrown, daggers pierce bodies, many sharpened bamboo poles tossed, people stabbed, dagger fights, arrow hits man in neck, throat sliced, and blood gushes in one climactic scene; implied fornication, attempted rape interrupted and prevented, some bodice ripping, romantic leads kiss while lying down outside, and scene set in brothel, but sexual activity is very subtly implied by having a few fully clothed women and men talking, laughing and disappearing in the distance; no nudity but woman’s ripped dress shows her back and shoulder; alcohol use and drunkenness; no smoking; and, spying, lying, general uses soldiers as cannon fodder, and civil war tears country apart.

HOUSE OF FLYING DAGGERS is a sumptuous looking, pulse pounding martial arts action epic from China that’s set in 895 A.D. It’s also a romantic melodrama of a romantic triangle, with the two main lovers caught between two opposing forces. Its story will remind knowledgeable viewers of Shakespeare’s ROMEO AND JULIET.

The movie opens with a reference to corruption in the Tang Dynasty, which is on its last legs. Rebellion has broken out, led by a secret society calling itself the House of Flying Daggers. Two of the Empire’s best men, Captains Leo and Jin, have just killed the rebel leader and are searching for the new leader. Mei, the blind daughter of the old leader, is dancing at the town brothel. Leo hatches a plot whereby he will arrest Mei, and Jin will help Mei escape from jail, leading them to the new leader of the House of Flying Daggers.

Pursued by Leo’s men, Jin and Mei travel through the countryside. Mei and Jin fall in love, but Mei doesn’t know if she can trust him. Meanwhile, the Emperor’s main general throws a monkey wrench into Leo’s plan. He sends troops in pursuit of Mei and Jin, troops who are unaware that Jin is on their side. Jin is faced with a disturbing moral dilemma, a dilemma further complicated by some exciting twists in the plot.

An overly melodramatic ending almost ruins HOUSE OF FLYING DAGGERS, but the movie is so exciting, lusciously beautiful, and dynamic that forgiving viewers should be able to overlook the old-fashioned ROMEO AND JULIET ending. This is especially true if they enjoy director Yimou Zhang’s clearly Shakespearean style. As with Zhang’s international hit HERO, HOUSE OF FLYING DAGGERS is filled with breathtaking action sequences. In one sumptuous scene photographed mostly in shimmering green, Chinese soldiers throw countless sharpened bamboo poles in a bamboo forest while relentlessly chasing Mei and Jin, who barely escape.

HOUSE OF FLYING DAGGERS also contains a wonderful dance sequence where Captain Leo challenges Mei to do the Echo Dance. This incredible dance sequence, which involves Mei, in colorful flowing robes, and hundreds of uncooked beans hitting a circle of drums, is one of the most beautiful scenes ever put on celluloid. It overcomes a slow start and shows what Stuart Kaminsky pointed out in AMERICAN FILM GENRES way back in the 1970s, that martial art movies are, in reality, dance movies.

HOUSE OF FLYING DAGGERS shows what can happen when three people get caught up in an epic civil war in their beloved country. Love and honor eventually defeat treachery and jealousy, but not without tragic consequences. That’s the tragedy of most civil wars, even when the good side, or the best side, wins.

The movie’s humanist worldview subtly combines Romantic and moral elements in a provocative, but not overtly offensive, way. Another great joy in watching this movie is seeing how powerfully Captain Jin is affected by the moral dilemma he faces and how the emotions of both he and Captain Leo are torn apart by the shifting romantic and political alliances unraveling in the story. Both they and Mei must decide where their loyalties should lie.

Because of the movie’s violence and sexual elements, however, MOVIEGUIDE® advises extreme caution. See the CONTENT section above if you have any questions.

Writer: Feng Li, Yimou Zhang BASED ON THE NOVEL/PLAY BY: N/A