"Diving Beneath the Surface" 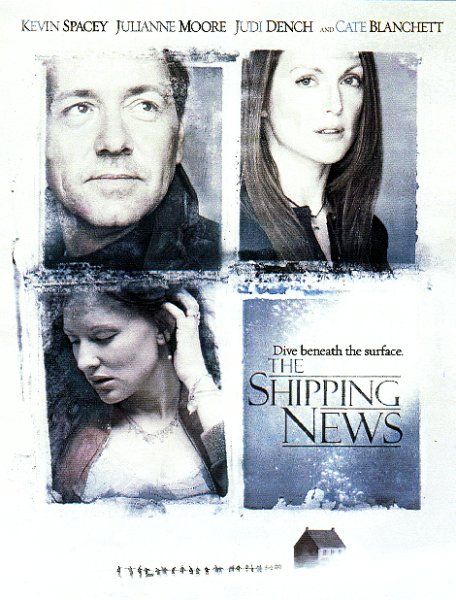 Kevin Spacey stars in THE SHIPPING NEWS as Quoyle, a mousy man who, after years of being cheated on by his wife, loses her in a car accident. Still stricken with grief over this despicable woman, Quoyle retreats with his long-lost Aunt Agnis and his daughter Bunny to Newfoundland, the mysterious home of their ancestors. Tied down to the land by ropes and stakes, the old family house sits precariously on a wind-swept cliff. In town, Quoyle secures a job as a reporter at the local newspaper. Surrounded by encouraging, compassionate and loving friends and relatives, Quoyle gains enough confidence to explore the secret pasts of other people and his own family.

The performances in THE SHIPPING NEWS are fine, but not spectacular. THE SHIPPING NEWS is a sometimes dry-humored character study that is fairly entertaining and compelling, but meant only for adult audiences. There are themes of incest, adultery and homosexuality. The movie also has a humanist worldview with some politically-correct elements. THE SHIPPING NEWS evokes plenty of righteous sympathy, however, for its embattled hero, Quoyle, who has many positive qualities. Despite a couple missteps, Kevin Spacey turns in another good performance.

Kevin Spacey stars in THE SHIPPING NEWS as Quoyle, a mousy ink-setter in upstate New York. After years of being cheated on by his wife, Petal, Quoyle loses his wife in a car accident, after she sold their daughter, Bunny, to a corrupt adoption agency. Still stricken with grief, however, Quoyle retreats with his long-lost Aunt Agnis (sic) and Bunny to Newfoundland, the mysterious home of their ancestors.

Aunt Agnis leads them to the old family house, which sits precariously on a wind-swept cliff. In fact, the winds hit so hard that Agnis and Quoyle’s ancestors tied down the wooden house with ropes and stakes.

Quoyle secures a job as a reporter at the local newspaper, The Gammy Bird. He picks up some journalism tips from Jack Buggit, the gruff owner of the paper who would rather be out fishing, and from Billy Pretty, the senior reporter on the staff. Encouraged by Aunt Agnis, his new friends and the love of his daughter, Quoyle starts to blossom. His sense of the quirky Newfoundlanders sharpens, along with his self-confidence. Gradually, a romance develops with Wavey, a young widow with a mentally handicapped son whom Bunny befriends. Quoyle becomes fascinated by the stories of the inhabitants of this weathered outpost and even more fascinated by the dark secrets of his own family’s past.

Based on a Pulitzer Prize-winning novel, THE SHIPPING NEWS is a sometimes dry-humored character study by director Lasse Hallström of CHOCOLAT, THE CIDER HOUSE RULES, ONCE AROUND, WHAT’S EATING GILBERT GRAPE, and MY LIFE AS A DOG. The movie evokes plenty of sympathy for its embattled hero, Quoyle, played well by Kevin Spacey. Except for his mousiness, Quoyle has many positive moral traits. He expresses plenty of concern for his daughter and shows an interest in truth and integrity, although he mistakes sex for love when he first meets his future wife, Petal. Quoyle, however, also expresses politically-correct sentiments toward lesbian homosexuality and against oil companies. These themes do not play a major role in the story, but they do mark somewhat important turning points in the plot. Once freed from his self-doubts, fear and forlorn attitude, Quoyle blossoms into a better man and a better father.

The performances in THE SHIPPING NEWS are fine, but not spectacular. Spacey does a good job, except when he makes a couple deliberately funny comments. The movie does not prepare viewers for such a major shift in his character, which makes these lines appear as if they come from the other, more extroverted roles that Spacey usually plays. Also, the character of Quoyle’s wife, Petal, and Quoyle’s relationship with her, do not seem realistic. They play more like something from the director’s own Swedish movies than something that might occur among Americans in Upper New York. Judi Dench and Scott Glenn deserve strong kudos, however, for their work in this movie as Aunt Agnis and the newspaper owner. It’s time someone gave another major, positive role to Glenn, who did such great work in THE RIGHT STUFF and SILVERADO.

THE SHIPPING NEWS also has a humanist worldview. Quoyle at first tells his daughter that her mother is sleeping with the angels, but, when an apparent miracle occurs late in the story, he tells her that this is not true. This humanist worldview also undermines the townspeople’s pagan beliefs in superstitious curses, but it spoils the poignant scenes in the movie between Quoyle and the other characters, including his relationship with his daughter, and tarnishes his own development as a character. THE SHIPPING NEWS also contains some violence, sexual content, brief but not explicit nudity, and a comic scene where Quoyle and a group of other men get drunk and rip apart a person’s boat.

Despite these moral and spiritual problems, it wouldn’t have taken much work to transform THE SHIPPING NEWS into a strongly redemptive, moral story. A good writer or director could study the structure of THE SHIPPING NEWS, cut out the evil content, add some Christian elements, and create a more wholesome, uplifting movie with great depth. As it is, THE SHIPPING NEWS is fairly entertaining and compelling, but it’s clearly a movie meant only for adult audiences.