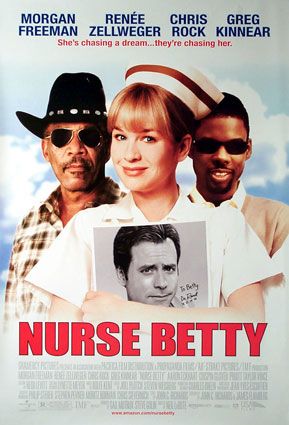 In NURSE BETTY, a naïve girl enthralled with a soap opera witnesses the brutal murder of her rude, cheating husband. To cope, she mentally blocks out what happened and instead confuses the soap opera with real life. As she develops a fixation on one of the lead doctors in the soap opera, the killers are hot on her trail because her husband left their drugs in the trunk of her car.

Despite NURSE BETTY’s unique storyline, this dark comedy contains strong violence, language and one scene of depicted sex. Winner of the Best Screenplay Award at the 2000 Cannes Film Festival, NURSE BETTY’s maniacal plot is, surprisingly, nowhere near the absurdity and stupidity of DROWNING MONA, another black comedy. Most of the actors play highly familiar roles, with the exception of Morgan Freeman, whose character greatly contrasts from his previous ones. The pervasive foul language and strong violence greatly mar an otherwise funny movie with a unique storyline and talented actors. The heroine, Betty, has a sweet innocence that only adds to the laughs when the antagonists are in pursuit, resulting in some bizarre situations. The movie’s worldview embraces the character’s romantic, humanist attributes

(RoRo, B, H, Pa, LLL, VVV, SS, N, A, MM) Mostly romantic worldview of girl who gets caught in the middle of corruption with moral, humanistic & pagan elements of honesty, caring, girl told that she “only needs herself,” & some disregard for life; over 77 obscenities, 18 profanities, a few lewd sexual references, & numerous uses of “idiot”; men point gun at man, tie him up, depictions of man scalping man, man being shot while struggling to get away, man hit by car, man thrown from car, car collides with ambulance, man aims gun at woman, man fires shots at police, police shoot man, woman aids in saving man with depicted blood squirting out of tube, woman slaps man, man yells violently at woman, & man pistol whips & beats other people; depicted adultery; woman puts underwear back on & some cleavage; alcohol use; and, miscellaneous immorality such as man is rude & arrogant toward wife & calls other people in town “idiots,” “injuns” & “faggots,” & woman entranced in soap opera with inability to distinguish reality from fantasy due to witnessing traumatic incident.

Renee Zellweger is NURSE BETTY, a waitress in a small Kansas town whose good-natured, caring personality is clearly evident to those around her. Everyone, that is, except for her rude, cheating husband, Del. Betty, however, has high hopes of being a nurse someday and watches her favorite soap opera, “A Reason to Love,” religiously.

When Del gets involved in a crooked deal, Betty witnesses his brutal murder by two men through a cracked door. Instantly, her mind develops a mental block of the incident, and confuses reality with her favorite soap. Soon, she is talking to others about leaving her husband and going after “Dr. David Ravell” (Greg Kinnear of LOSER), not listening when they tell her he is only a character on TV. She heads off to California, leaving the town’s sheriff, her best friend and a reporter to try and solve Del’s murder.

Meanwhile, Del’s killers, Charlie (Morgan Freeman of DEEP IMPACT) and Wesley (Chris Rock of DOGMA), try to pursue Betty, who has their drugs in the trunk of the car she’s driving. They also believe she witnessed the murder because she left town so fast, and they pose as U.S. Marshals and life insurance investigators to track her down.

Betty purchases a nurse’s outfit and heads for the hospital. She applies for a job despite having no experience and asks about “Dr. David Ravell.” Not getting either one, she begins helping people out anyway, unbeknownst to the hospital’s director. One day she saves a man’s life, and, though she is scolded, they offer her a job helping in the hospital’s pharmacy. Later, she is offered a place to live by Rosa, the rescued man’s sister. Rosa admires Betty’s romantic interest, but when she discovers he is only a character on a soap, she is outraged. Hoping to snap Betty back into reality, she takes her to a charity ball where “Dr. Ravell,” a.k.a. actor George McCord, will be. Betty introduces herself as his “long lost love,” much to the amusement of the show’s producer standing nearby. However, Rosa’s plan backfires when Betty actually leaves with George, who believes Betty is just after a job on the show. From there, more and more trouble arises when Charlie and Wesley discover her location, and Betty’s dream world collides with reality.

Winner of the Best Screenplay Award at the 2000 Cannes Film Festival, NURSE BETTY’s maniacal plot is, surprisingly, nowhere near the absurdity and stupidity of DROWNING MONA, another black comedy. Most of the actors play highly familiar roles, with the exception of Morgan Freeman, whose character greatly contrasts from those he played in AMISTAD and THE SHAWSHANK REDEMPTION. Renee Zellweger’s “innocent girl caught up in the midst of corruption,” and Greg Kinnear’s “handsome but shallow” characters are convincing, yet only slightly different from their previous roles. Perhaps the role that is truly worn out is Chris Rock as “the angry man who shoots his mouth off.” Like his character in DOGMA, Rock’s lines couldn’t be too difficult to memorize, as half of them are obscenities and profanities. It would be refreshing if he would take on roles similar to his one in LETHAL WEAPON 4.

The pervasive language and strong violence mar an otherwise funny movie with a unique storyline and talented actors. The heroine, Betty, has a sweet innocence that only adds to the laughs when the antagonists are in pursuit, resulting in many bizarre situations. The movie’s worldview embraces the character’s romantic, humanist attributes. Though this is not a deep movie, its answers to life lie in “self” rather than in the Creator.