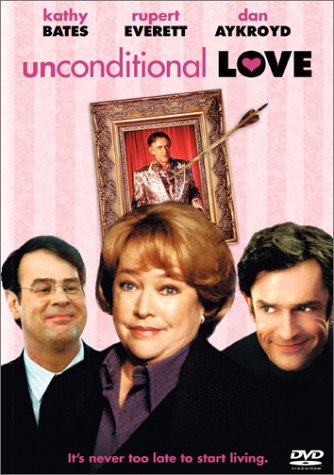 UNCONDITIONAL LOVE is a low-budget attempt by an African-American Hollywood bit player trying to break into the big time. A newspaper reporter falls in love and seeks justice for the killer of his long-time friend and mentor. Though earnest, occasionally intelligent and well photographed, this movie fails to register both in public acknowledgement and entertainment and contains obscenities, sexual situations and violence.

UNCONDITIONAL LOVE sounds like a movie you might want to see or perhaps a Christian drama found at your local Christian bookstore. It is neither. It is a low-budget attempt by a Hollywood bit player trying to break into the big time. Though earnest, occasionally intelligent and well photographed, this movie fails to register both in public acknowledgement and entertainment.

Former boxing promoter and stand-up comedian John Kennedy Horne produces and acts as Joe Kirkman, a reporter for a major newspaper. Joe has sacrificed love for career advancement, but now is looking for Miss. Right. He finds her in the form of lovely bookseller, Patrice Summers, played by Tracey Ross. They have a few dates, drink a little wine and soon are fornicating, much to the consternation of Patrice’s doting boss.

Joe receives some bad news. His former newspaper mentor, Linda, has been found dead with her throat slit. She had been doing an investigative report on some nefarious dock workers in Southern California tied in with a communications company led by corrupt Ted Markham (Henry Silva). Eventually, Joe realizes that Markham and his thugs killed Linda, but he can’t prove it. When Patrice and Joe poke into matters too close, Patrice’s roommate is found dead at the bottom of a cliff. Joe hires a former criminal and friend to break into Markham’s headquarters, find the implicating evidence and bring Markham to justice.

Inconsistent writing dulls this action story. The good guys speak intelligently and the bad guys sound like their writing was done by a junior high student. John Kennedy Horne himself, while smooth and smart, many times looks dopey and silly, like a bad impression of Billy Dee Williams. A notably low budget, with infrequent and cheesy music, contributes to the lack of production quality and entertainment.

However, Horne and writer/director Steven Rush should be commended for not going to contemporary African-American cinematic stereotypes such as constant obscenity use, constant sexual humor and criminal behaviors. Joe is an honorable man who seeks justice. Thus, Horne and Rush are simply trying to create a sound thriller, with a cast made up primarily of African-Americans. It is good to see such stereotype-busting plot. Other commendable elements include a quest for justice, and not vengeance, and a discussion of unconditional love, contrasted with jealous, conditional love by a competing suitor who fails to win the heart of the object of his attraction.

It is amazing that this movie got as large an audience as it did. Not released by a major distributor, or even an independent distributor, Horne’s own company, Horne Entertainment has found a market for UNCONDITIONAL LOVE in the major cities. While he may work again, as an actor or producer, this movie clearly seems to be a calling card. Yet, with poor production values, it remains to be seen if he’ll have future takers.