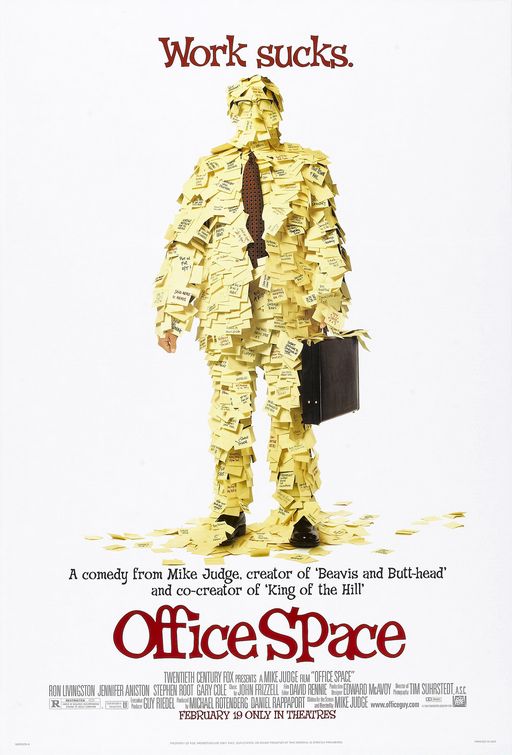 OFFICE SPACE is about a young man who takes some drastic measures toward his dull job and the uncaring company for whom he works. The sometimes brilliant comedy in this movie is hurt by lots of unnecessary foul language, a sex scene that is too graphic, some nudity, some undermining of the American work ethic, and a cavalier attitude toward the crime of arson. Its positive moral qualities fail to make up for this immorality.

(PaPa, B, Ho, LLL, V, SS, NN, AA, DD, MM) Strong pagan worldview with some moral elements and minor crude references to homosexual behavior in prison; 103 obscenities and 5 profanities plus some crude sexual remarks; men beat up printer that does not work and implied arson; one scene of depicted fornication and some sexual references; upper male and female nudity; alcohol use and drunkenness; smoking and drug references; and, strong miscellaneous immorality such as lying, stealing and arson.

Mike Judge, the creator of two animated TV programs, the odious BEAVIS AND BUTT-HEAD and the sometimes odious KING OF THE HILL, turns to live action in this comedy about the American workplace, OFFICE SPACE. Although the movie contains some truly inspired comedy and is nowhere near as repulsive as the aforementioned B AND B, it contains enough objectionable material to earn a very low moral rating.

The movie begins with a hilarious visual joke about a bumper-to-bumper traffic jam on a freeway in Los Angeles. Twentysomething Peter Gibbons is inching along in traffic when he notices that an elderly man using a walker is going faster than he is. Later, the audience learns that Peter really hates his job. One of the reasons is his monotone boss, Bill, who keeps nagging him about forgetting to use the new cover on the company’s TSP reports.

Peter sees a hypnotherapist to help him get over his aversion to work, but the hypnotherapist dies of a heart attack in midst of the treatment, leaving Peter in an apathetic, dreamy, hypnotic state. Peter decides not to go to work anymore, except when he wants to see his friends or goof off. Naturally, this would automatically get him fired, but his relaxed state of mind causes him to tell the truth about the inefficiencies in the company to some downsizing consultants. The consultants are so impressed by Peter’s candor and suggestions, that they decide the company should promote him so that Peter can have a more challenging position within the company.

Regrettably (in more ways than one), Peter hatches a scheme with two friends to rip off the company. The scheme goes haywire, however, and they try more schemes to hide their crime. Eventually, Peter decides to take the blame (to his credit), but ironic circumstances intervene when a mousy, mumbling co-worker named Milton decides to take his own revenge against the company.

Gary Cole as Bill and Stephen Root as Milton give highly memorable, very funny performances. Ron Livingston and Jennifer Aniston are extremely likable as the two main leads. They help give the story a strong satirical edge that has many good points to make.

The script begins to fail everyone, however, including the audience, in the final quarter of the movie. The movie ends with a whimper instead of the slam bang comic climax that it should have. Much of the problem may be due to the fact that the story of employees hatching a scheme to rip off their company is a familiar one, and Judge provides no significant new twist on it.

The comedy in the movie is also hurt by lots of unnecessary foul language, a sex scene that is too graphic, some nudity, some undermining of the American work ethic, and a cavalier attitude toward the crime of arson. In contrast to this immorality, Peter finally realizes in the end that it was a bad idea to steal from the company, no matter how badly it treats its employees. He also realizes that he wouldn’t mind going to work if he had such a caring woman like Jennifer Aniston’s character for a wife. These positive qualities are not enough, however, to give OFFICE SPACE a higher acceptability rating. Essentially, the movie just pushes too many envelopes.