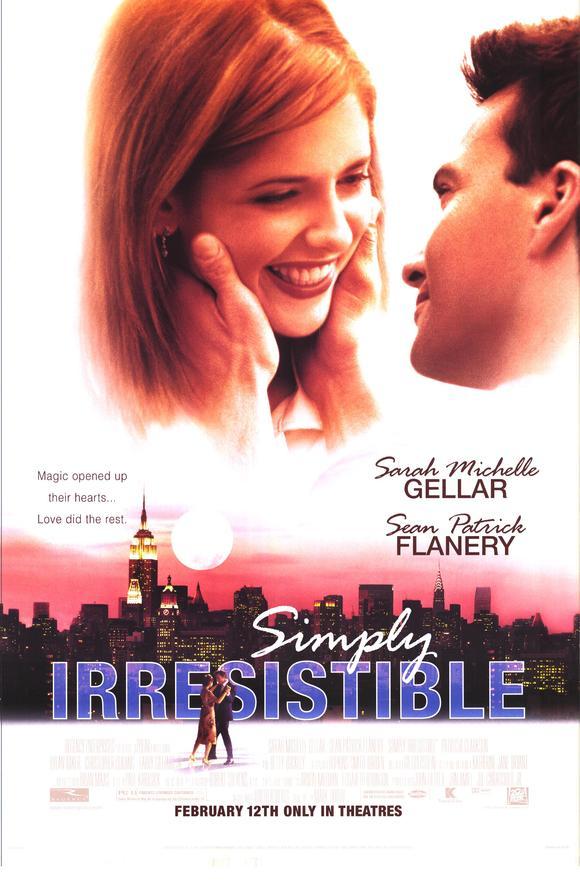 SIMPLY IRRESISTIBLE steals its premise from LIKE WATER FOR CHOCOLITE, about a chef who cooks her own emotions up inside the food she creates. When her customers consume the food, they feel what she feels while she was making it. Sarah Michelle Gellar is the chef who cooks and falls in love in a dull, tackily-written romantic comedy with magical elements called SIMPLY IRRESISTIBLE.

Romantic worldview with vague occult & biblical, moral elements; 11 obscenities & 11 profanities; no violence but chef throws knife in protest; no sex but some mild sexual humor & kissing; no nudity; alcohol use; and, smoking.

It was done with THREE MEN AND A BABY and more recently with CITY OF ANGELS. Now, SIMPLY IRRESISTIBLE steals the concept from a superior foreign film and adapts it for an American audience. The better foreign film is LIKE WATER FOR CHOCOLATE, and the concept is a chef who cooks her own emotions up inside the food she creates. When her diners consume the food, they feel what she feels while she was making it. TV’s own “Buffy the Vampire Slayer,” Sarah Michelle Gellar, sheds her bad-girl image to try her craft at the dull, tackily-written romantic comedy SIMPLY IRRESISTIBLE.

Amanda Shelton (Sarah Michelle Gellar) is the owner/chef of a charming, formerly successful restaurant, called The Southern Cross, which she inherited from her deceased mother. Her cooking skills leave much to be desired, and she only has a few loyal customers. Attractive and friendly, she is thoroughly discouraged to hear that her restaurant must close. One day, when she is at an outdoor food market making the last purchase for the store, a man who mysteriously vanishes sells her some crabs.

At the market, she meets Tom Bartlett (Sean Patrick Flanery), a high-ranking executive at a famous department store. Determined and ambitious, he is at the market to examine the food there for an exclusive restaurant called Jonathan’s that he is opening adjacent to his store. A crab gets away from Amanda and clamps down on Tom’s leg, and she lies to him and tells him that she makes a great Crab Napoleon at her restaurant. The next day, he shows up, and she has no idea how to make a dish she never made before. However, these are magic crabs, apparently, and one in particular escapes to oversee the work in her kitchen. Amanda just starts moving ingredients and out pops the most delicious and beautiful crab dish she has ever scene.

Tom tells others and The Southern Cross starts to flourish. Of course, Tom is drawn to Amanda and is even helped along by her feelings of love she now cooks into her food. Strange things happen, like they levitate when they kiss, and Tom suspects her of witchcraft. Romantic complications follow, all accumulating in Amanda filling in for a chef who quits at Jonathan’s. Now, Amanda must prove her skills at a most prestigious restaurant.

This is a movie that tries to have the same breezy fun as a 30s or 40s romantic comedy. However, most of those movies had great writing and big, bright shining stars. SIMPLY IRRESISTIBLE remains resistible because it suffers from groan-inducing lines like, “I hate this floating stuff” and obvious statements like, “Everything you feel is going into your food.” No kidding. Gellar may one day be a huge movie star, but now she remains a favorite among TV fans, which includes a huge teenage base. Flanery has done a few duds including the New Age POWDER.

LIKE WATER FOR CHOCOLATE is superior because it has fantastic artistry and some strong subplots including family rivalry and trying to measure up to mother’s expectations. SIMPLY IRRESISTIBLE has dumb sidekicks and almost no subplots.

The danger of the magic of SIMPLY IRRESISTIBLE is weakened by the fact that it follows no logic, is unexplained, unmotivated and inconsistent throughout. Amanda doesn’t summon spirits, or even ask for magic in her life, but Tom is right when he corrects Amanda. When she says it is magical, he calls it demonic. Tom also says that he wants free will and to be in control, but, in the end, it is romance and not magic which causes him to yield to the call of love. (On a side note: God is recognized by one chef who says, “God creates the truffles.”)

This seems like a low-budget movie with a few rising stars who want to simply pad their resume with big screen material. SIMPLY IRRESISTIBLE also hopes to capture the baby kaboom who might not enjoy the bloody thrills of the teenage horror genre. Regrettably, a dumb script, a dumb supporting cast, illogical plot devices, and more make this movie easy to push away. It is the perfect movie to turn off the brain, and perhaps even get some needed sleep.