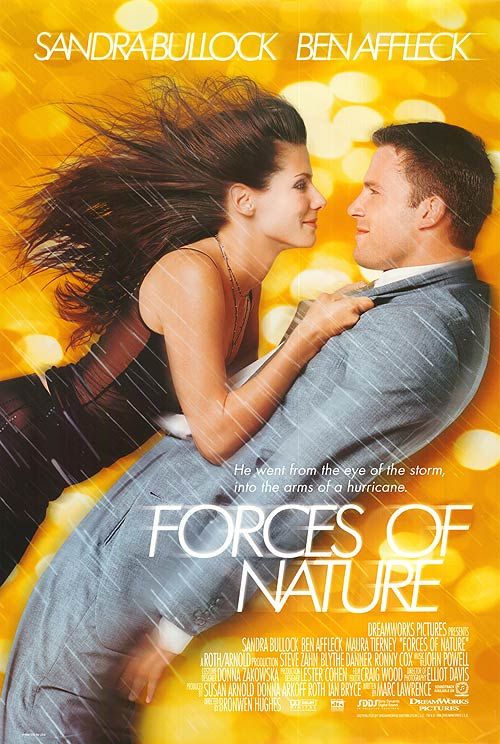 Married life gets a critical look in the new romantic comedy from DreamWorks, FORCES OF NATURE, but is ultimately validated. This vindication of marriage counteracts the movie's objectionable material, most of which is mild. The movie tells about mild-mannered Ben Holmes, played by Ben Affleck, who meets a wild but attractive young woman, played by Sandra Bullock, on this way to Savannah, Georgia to get married.

Married life in these Roaring Nineties gets a critical look in the new romantic comedy from DreamWorks, FORCES OF NATURE, but is ultimately validated, though just barely.

Ben Affleck stars as mild-mannered, traditional-minded Ben Holmes from New York City. Holmes writes blurbs for book covers and is getting married to Bridget, the daughter of a respectable family from Savannah, Georgia. Doubts about his upcoming nuptials begin when his grandfather, stricken by a heart attack during Ben’s bachelor party in New York, tells Ben that he never loved his grandmother and always dreamt of being in the arms of other women. “Don’t tie yourself down,” Grandpa tells him. “Marriage is a prison.” Further hurting matters is the groom’s best man, Alan, played by Steve Zahn, who advises Ben to stop the marriage and try dating (and fornicating) more women than he has. Ben remains adamant, however. Adamant, that is, until he meets a wild young woman named Sarah, played by attractive Sandra Bullock.

Ben first meets Sarah on the plane that will take both of them to Savannah. Ben protects Sarah when a bird suddenly flies into one of the plane’s engines before takeoff, causing the plane to crash into a sign reading, “Welcome to New York.” Back in the airport, Sarah thanks Ben by kissing him full on the lips. Then, when all the rental cars are gone, Sarah boldly gets a ride for both of them from a flaky guy named Vic. In the car, Vic starts talking about his failed marriage while he and Sarah light up a marijuana cigarette. Suddenly, the police stop Vic’s car, and in the next scene at the jail the movie reveals that Vic has been arrested for suspicion of selling marijuana, but Ben and Sarah are let go.

This is only the beginning of Ben and Sarah’s misadventures together. More accidents follow this beginning, further delaying Ben’s arrival in Savannah. As Ben becomes more attracted to Sarah, he learns that Sarah is heading to Savannah to visit her son by her first marriage and that she is divorcing her second husband and secretly selling the bagel store they bought with her money. Despite all of Sarah’s marital woes, Ben eventually tells her that he thinks she is intelligent, funny and creative, and deserves a better life. Will Ben try to give Sarah that better life, or will he go through with his marriage to Bridget?

As Ben and Sarah make their way toward Savannah, a hurricane is approaching that city. The natural hurricane, however, is nothing compared to the hurricane brewing among Bridget and her family. Bridget, who is played by Maura Tierney in an engaging performance, learns that her parents have separated, without her knowledge (they didn’t want to spoil her wedding plans). Complicating matters is Bridget’s old flame, a successful lawyer named Steve, who still loves her. Bridget begins to wonder what’s keeping Ben, and the movie uses her doubts to help set up the climactic ending.

FORCES OF NATURE is a mildly entertaining romantic comedy that is helped along by some good performances, especially among the three leads, and a creative, but sometimes intrusive, visual style. Although the movie ultimately validates heterosexual marriage, and long-term monogamous relationships, it includes plenty of objectionable material, most of which is mild. The strongest such material includes, perhaps, the stripper at the bachelor party that opens the movie and a scene where Ben strips down to his underwear at a homosexual bar so he and Sarah can earn money to buy a cheap car to complete their trip to Savannah. The movie also features many comments putting down the sanctity of marriage, such as the one by Ben’s grandfather that “Marriage is a prison.” Counteracting these negative comments are some positive comments from Ben’s father about his own marriage and the movie’s positive ending.