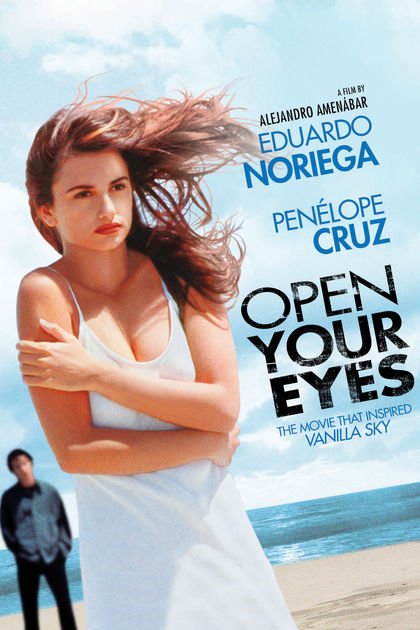 The Spanish film OPEN YOUR EYES is a confusing and ultimately mindless psychological thriller about a young man whose face is disfigured in an apparent car wreck by a jealous girlfriend. The blending of reality and fantasy never really makes any sense in the movie's second half. Also, the movie has a pagan worldview combined with foul language, sexual situations and upper female nudity.

Pagan worldview of esteeming physical beauty with humanistic element exploring cryogenics, the process of freezing people in order to bring them back to life; 51 obscenities; moderate violence including car accident where driver killed & passenger disfigured & woman smothered with pillow; implied fornication; upper female nudity; alcohol use throughout; and, jealousy & betrayal.

Such is the case with writer and director Alejandro Amenabar’s new movie, OPEN YOUR EYES (ABRE LOS OJOS). Regrettably instead of being provocative, this movie sends the audience on a confusing and ultimately mindless journey.

The story starts with the 25th birthday of Cesar, played by Eduardo Noriega, a rich, charming and handsome man. When introduced to his best friend Antonio’s date, Sofia, played by Penelope Cruz of THE HI-LO COUNTRY, Cesar becomes quite taken with her. At the party, however, Nuria, a girl Cesar has been sleeping with, played by Najwa Nimri, crashes the party and is obsessed with getting Cesar’s attention and his time, but Cesar is uninterested and snubs her, turning his full attention on Sofia.

After spending the evening alone with Sofia, talking and getting to know her better, Cesar falls in love with her. As Cesar walks home from Sofia’a apartment, Nuria comes by in her car and pleads with Cesar to get in for a drive. Cesar capitulates, but Nuria, in a jealous rage, drives the car off the road, killing herself and totally disfiguring Cesar’s face.

After the crash, fantasy and reality begin to blend together. Cesar wakes up in a psychiatric hospital, undergoing evaluation for a killing he cannot remember, the murder of Sofia. Even more perplexing, Nuria seems to be alive. Working with a psychiatrist, Cesar retraces the events that took place after the crash, trying desperately to figure out how he ended up in such a nightmare. Is Cesar living in a dream, or has he gone mad? As he plunges deeper into his own paranoid psyche, he slowly begins to piece together his past, finding out that sometimes you can’t awaken from a nightmare, even if you do open your eyes.

Director Alejandro Amenabar, who co-wrote the script, apparently intends to challenge the audience’s perception of reality in this movie. Although the story sounds intriguing on the surface, he does more to frustrate the audience by totally losing them in the process. The blending of reality and fantasy never really makes any sense in the movie’s second half, despite the best efforts of the actors. Audience members will be disappointed if they hope for the point of the story to become clear, because it never does.

Cryogenics (the process of freezing people in order to bring them back to life) is introduced in this movie as a viable reality, but it never comes across as believable, even if it were possible scientifically. The humanistic element of cryogenics is combined with a pagan worldview where physical beauty is esteemed above all else. This worldview includes foul language, sexual situations and upper female nudity. Consequently, many people will want to keep their wallets closed rather than open them to theaters showing this movie.