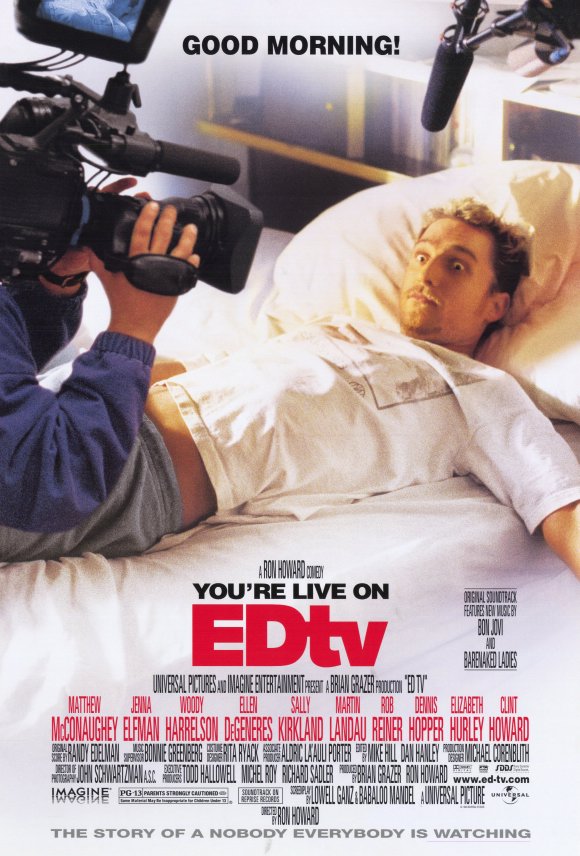 A TV network gets a likeable 31-year-old video store clerk to agree to have his life broadcast on TV 24 hours a day in Ron Howard's new movie, EdTV. This story leads to disturbing sexual situations, lots of foul language and sleazy revelations about Ed's mother and brother.

In his acting career, Ron Howard appeared in family-friendly TV shows, such as THE ANDY GRIFFITH SHOW and HAPPY DAYS, but in his directing career, his movies have been somewhat less than pristine. They often include some objectionable sexual content, including sweet-natured hits such as SPLASH and COCOON. EdTV may be Howard’s most anti-family movie yet, even though it contains two very likeable leads, some minor appealing characters and a mildly moral worldview overall.

The movie opens with Cynthia (Ellen DeGeneres), a programming executive at True TV, a reality-based television network, searching for an average guy who would agree to have his life broadcast on TV 24 hours a day. After holding a series of auditions, she finds Ed, a likeable 31-year-old video store clerk with a warm Southern accent, played by Matthew McConaughey. Ed’s brother Ray, played by Woody Harrelson, convinces Ed to accept True TV’s offer, because it is their family’s one chance at success. At first, Ed TV seems to be a bust, but ratings go up when Ray cheats on his girlfriend, Shari, played by TV actress Jenna Elfman in another likeable performance, and Ed goes to Shari’s apartment to defend his sleazy brother but ends up falling in love with her.

These new developments hook a large audience and lead to polls about Ed, Shari and Ray in USA Today. They also lead to discontentment in Shari, however, who is disturbed by all the lack of privacy in her budding romance with Ed. When a new poll comes out that shows Americans favor Ed dumping Shari for a sexy model, Jill, whom Ed met on Jay Leno’s TONIGHT SHOW, Shari decides to move to another city until Ed’s TV show runs its course sometime in the future. Cynthia, the programming executive, takes advantage of this situation. She hires Jill to accidentally meet Ed again and seduce him so that the network can get big ratings when Ed and Jill fornicate on TV.

Meanwhile, Ed’s brother Ray is mad that Ed stole his girlfriend, so he writes a tell-all book with an off-color title. Furthermore, when Ed’s biological father returns to take advantage of Ed’s fame, Ed learns that his mother (Sally Kirkland) lied to him when she said his father ran away with another woman when he was young. Ed learns that his mother also cheated in their marriage, with Ed’s future stepfather, played by Martin Landau.

All of these events cause Ed to realize that the TV show is starting to mess up his life and drive his family apart. When he tries to end his contract with True TV, Ed learns that there are some hidden clauses in his contract which won’t let him go. The clauses also allow True TV to set up cameras with his mother, stepfather and brother. Desperate to get his life back, Ed comes up with an inventive plan to make the TV executives pull the plug on Ed TV.

Although there are some touching, positive moments between Ed and Shari, Ed and his stepfather, Ed and his father, and even Ed and his brother Ray, there are several sleazy aspects to this story. First, it is clear that Ed comes from a highly dysfunctional family. The character of Ed’s mother comes off the worst in this anti-family movie. Not only has she hid the truth from Ed about his father, but also toward the end of the movie she goes to see Ed’s father to talk with him, only to sleep with him again, an act that results in his death. This immoral act and tragedy is played for laughs, as is the scene where Ed and the sexy model start to make love on her dining room table, all to the cheers of the TV audience, including three young teenage males shown watching the show. Finally, the movie’s happy ending shows Ed and Shari lying in bed together watching TV, apparently after another night of sexual relations.

Thus, although EdTV obviously disapproves of the actions of Ed’s brother, mother and father, criticizes the TV executives exploiting Ed and his family, and interrupts Ed’s sexual liaison with Jill, the movie advocates the evil of premarital sex. It also takes pleasure in the idea of televised sex between Ed and Jill, up until the point that Ron Howard decides he has gone too far and must end Ed’s affair with Jill so that he can justify Shari’s decision to return to Ed at the end of the movie.

The appealing aspect of EdTV are the performances of the movie’s two stars, Matthew McConaughey and Jenna Elfman, and Ron Howard’s marketable name.