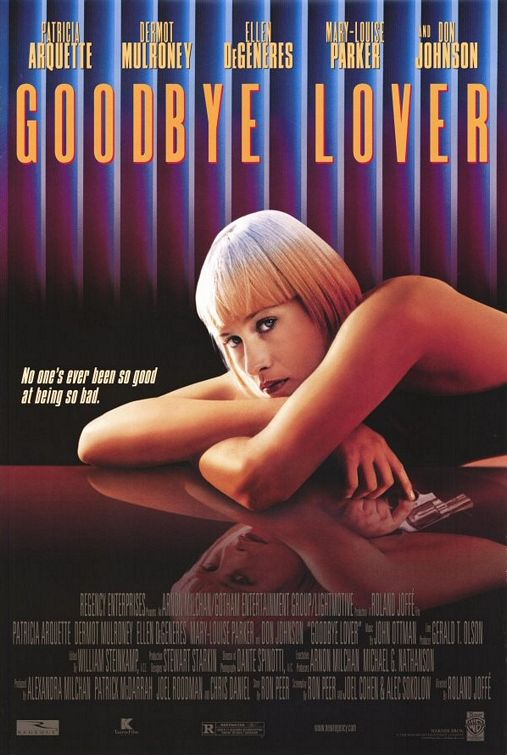 A poorly written black comedy with only marginal surprises, GOODBYE LOVER is filled with adultery, murder and unfunny humor. Ellen DeGeneres plays a detective and makes fun of her moral detective partner as she weeds through sex, murder and an inheritance involving four spoiled young professionals starring Don Johnson and Patricia Arquette.

Say goodbye to GOODBYE LOVER. A poorly written black comedy with only marginal surprises, it is filled with adultery, murder and unfunny humor, especially at the expense of the moral people in the story.

Director Roland Joffe apparently was tired of serious work, after previously directing THE KILLING FIELDS and the praised THE MISSION. Yet, Patricia Arquette, it seems, has always enjoyed subversive stories, because she has made a career out of it, including work in TRUE ROMANCE and LOST HIGHWAY.

Arquette plays Sandra Dunmore, a devout hypocrite: friendly, a frequent churchgoer, and always doing good to others, but having a tawdry sexual affair with her brother-in-law, executive Ben Dunmore (Don Johnson). Her fake exterior belies her rude, unfeeling and wicked interior. Meanwhile, her husband Jake (Dermot Mulroney) is on a downward spiral, abusing alcohol and making an embarrassment out of himself at work. The convenience and ease of Sandra’s affair with Ben seem natural, now that her husband has other things on his mind, but Ben is also having an affair with his secretary, Peggy Blaine (Mary-Louise Parker).

Eventually, this volatile mix results in murder. Enter Rita Pompano (Ellen DeGeneres), a hardened, cynical detective who has a moralizing, buffoon of a partner, Detective Crowley (Alex Rocco). Immediately, Rita smells a rat, but she can’t fit together the pieces. Nevertheless, she doesn’t have to wait long before more double-crosses arise, resulting in two more deaths of our original fornicating foursome. Throughout it all, Sandra comforts her nefarious deeds by playing the soundtrack to THE SOUND OF MUSIC, giving new and dark meaning to the innocent lyrics and melodies. Eventually, inheritance money is split between two parties in a wicked game of blackmail.

Rare is the effective black comedy which doesn’t offend or handle its wickedness carefully. Hitchcock was good at it, and, occasionally, an effective and morally just modern black comedy emerges, such as TO DIE FOR. However, GOODBYE LOVER is neither effective, morally just, funny, nor well written. Sex abounds, as does violence, and particular pleasure is made in attacking morality. Sandra and Ben commit adultery on the bench of a church organ, while the choir practices. Likewise, they bicker about sex while they serve as ushers during the offering. When the preacher tells Ben that he would like to get together with him to read Scripture, it is designed for laughs.

Finally, because he is strange and Mormon, great lengths are continually made to make fun of and even emasculate Detective Crowley. He becomes appalled at immorality (played up for laughs), and his wooden manner is cause for derision by Rita, who thinks he is “gay.” Ellen DeGeneres never fully got a chance to attack the religious right on her TV program, but she does here in GOODBYE LOVER.

While definitely nasty, the bite of this black comedy is not sharp nor painful but merely a tedious display of perversion. Many secular critics walked away critical of the script and the lame acting. The only thing worthwhile about the movie is the art direction and photography. GOODBYE LOVER has been looking for a distributor since 1997. Apparently, no studio wanted to touch it. Though Warner Bros. has reveled in film noir in the distant past and the recent past (with LA CONFIDENTIAL), it should have said goodbye to this dud long ago.