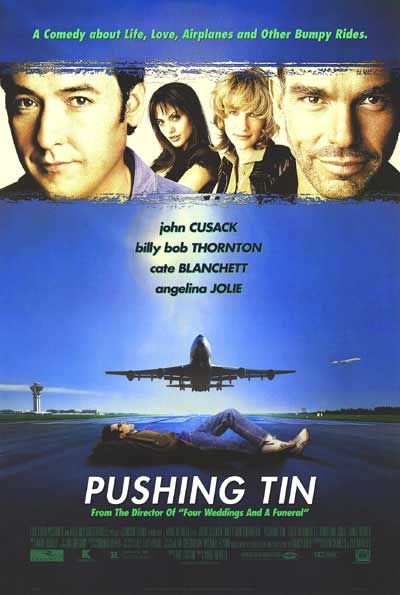 Based on a 1996 article in New York Times Magazine, PUSHING TIN explores the seldom seen world of the ultra-high stress job of air traffic controlling. Two cavalier stress-aholics try to one up each other in New York, while keeping each other in the dark about their affairs with each others wives. Though it includes implied adultery and some sexually suggestive humor, this movie is nearer to PG-13 material as it explores primarily pagan folks who have a faint glimmer of divine knowledge.

Based on a 1996 article in New York Times Magazine entitled, “Something’s Got to Give,” PUSHING TIN explores the seldom seen world of the ultra-high stress job of air traffic controlling. Two cavalier stress-aholics try to one up each other in New York, while keeping each other in the dark about their affairs with each other’s wives. The movie sort of a M*A*S*H meets TWISTER with a large dose of adultery.

Nick Falzone (John Cusack) is a control freak. He “pushes tin” or moves airplanes at New York’s Terminal Radar Approach Control Center (TRACON) on Long Island. This facility handles up to 7,000 flights a day into and out of the finite airspace above Kennedy, LaGuardia and Newark airports. Nick works the radar scopes, the busiest of them all, and he is the best of the best. Even off work, he is telling his co-workers what to do, and lining up everyday objects. He is fueled by caffeine, tobacco and stress, and is seemingly happily married to Connie, played by Cate Blanchett.

Enter Russell Bell (Billy Bob Thornton). A laconic loner, he is rumored to have stood in the turbulence wake of a departing 747b just to see what it felt like. Russell also has a beautiful, mysterious wife named Mary (Angelina Jolie), who is just a little scared to be living in a strange city.

Immediately, Russell and Nick begin a macho contest of wills, in seeing who is the best at everything. Nick begins an immediate dislike for Russell, but finds Mary quite attractive. When Russell is out for the night, Nick finds Mary weeping uncontrollably at the local grocery. He takes Mary to dinner and ends up having a quick sexual romp with her. He feels immediately guilty.

In a fit of honesty, Mary confesses to Russell, who begins to woo Nick’s wife Connie in revenge. Will Connie succumb to his charms? Can Nick hide his guilt from Connie? And how will all this affect the lives in the control tower and the lives of the airline passengers in the air? These are the questions the movie resolves in its final third act.

This movie is like M*A*S*H because these men single handedly hold the fate of men’s lives with their skilled decisions. Rampant humor throughout and some sexual innuendoes leaven this continual life-or-death threat. PUSHING TIN is like TWISTER because the talk is mostly techno-speak, and the style of the men is all scientific nerd. They and their world are completely new to the silver screen, but some if not many viewers may feel it’s not worth a story that runs over two hours. While all actors perform well, the adultery aspect carries on too long and resolves too simply and predictably.

John Cusak continues to have a quiet but remarkable screen presence in offbeat roles. Likewise, English actress Cate Blanchett is dramatically expanding her range herein by playing a believable, average New York wife. Billy Bob Thornton is at his most laconic, and Angelina Jolie remains parked as the vamp. Good acting among these four leads keep the story interesting.

Everyone in this movie lacks morality and credibility. A seeming combination of stress and lack of character yields bad behavior. Eventually, Russell has the dignity to quit, knowing that many lives are affected by the silly macho game that he and Nick play. Interestingly, after Mary commits adultery with Nick, she says “Sorry, God.” At one point Russell tells Nick that, in order to straighten out his life, he needs to jump in a cold stream to be cleansed of his sins and be born again. This is done slightly tongue in cheek, but it is true. When Nick rejects that advice and wants another solution, Russell gives him one, but tells him that jumping in the stream would have been much easier.

PUSHING TIN ultimately becomes a little long winded in its analysis of this world. Perhaps a documentary feature would have served it better without getting into a poorly written love struggle about adultery. These characters and their world are interesting enough, however. In the end, PUSHING TIN is a small movie about a very specific subject. It doesn’t’ have big stars and isn’t written strongly enough or with heart enough to win mass appeal, but it does look at a world few have seen. Many may not want to fly around New York after watching this movie, but perhaps more will think twice about cheating on their co-worker’s wife. Only time will tell if this movie will fly at the box office.

Writer: Glen Charles, Les Charles BASED ON ARTICLE: "Something's Got to Give" by Darcy Frey