LOVERS OF THE ARCTIC CIRCLE 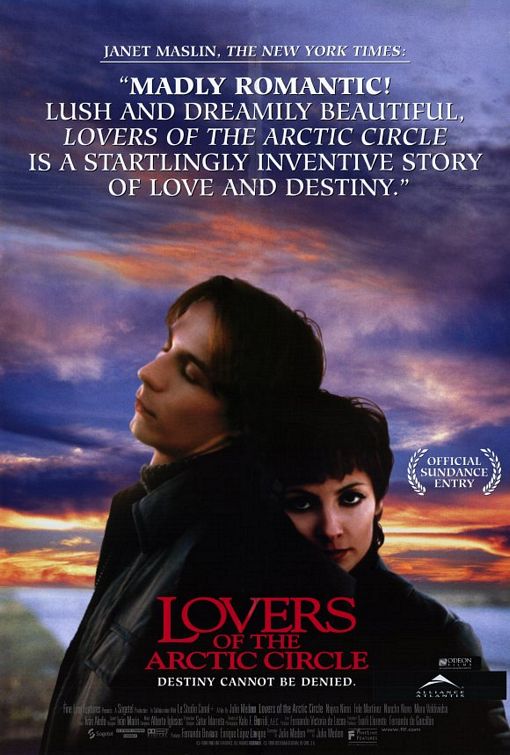 In a whirl of determinism, fate and splendid cinematography, new writer/director from Span Julio Medem weaves a multi-generational tale of romantic love, and repeating the past in LOVERS OF THE ARCTIC CIRCLE. Otto and Ana become step-siblings and then lovers in this slow moving movie containing much sexual content including nudity.

Combining the European styles of Krystof Kyslowski (BLUE and RED) and Ingmar Bergman (THE SEVENTH SEAL) in a whirl of determinism, fate and splendid cinematography, new writer/director from Spain Julio Medem weaves a multi-generational tale of romantic love and repeating the past in LOVERS OF THE ARCTIC CIRCLE. Slow moving and containing brief but extensive sexual content and nudity, it postulates that romantic love is sometimes serendipitously inevitable.

Ana (Najwa Nimri) and Otto (Fele Martinez) first meet on the schoolyard when they are eight-years-old. Ana’s father has just died in a car crash, and Otto’s parents are separating. As they stare at each other, Ana wonders if her father’s spirit has entered the body of this young boy. Otto simply looks at her in spellbound amazement.

Otto is a dreamy, quiet boy who loves airplanes and all things to do with aviation. One day, he sends a squad of paper airplanes into the schoolyard, which results in a chance meeting and a romance between his father Alvaro (Nancho Novo) and Ana’s mother Olga (Maru Valdivielso). Alvaro and Olga move in together, imposing a familial state on their two children. In fact, Olga calls Ana and Otto brother and sister, but these two burgeoning lovers disagree.

Otto lives with his mother, Ula (Beate Jensen), but he visits his father each weekend. When they have reached their teenage years, Ana abandons the idea of Otto as a proxy for her father. When Otto tells a story about how he came to be named after a German pilot with whom his grandfather struck up a brief friendship during the Spanish Civil War, Ana is suddenly able to see him as a person with his own history. One night, as they look over a map of the Arctic Circle, she leans over and kisses him. This begins a secret romance involving Otto sneaking into Ana’s room at night for fornication.

Otto leaves his mother’s house to live with his father and Ana full time. This devastates his mother. One day, when Otto goes to visit her, he finds her dead in the kitchen. Guilt stricken, Otto runs away from his father’s house, without explanation, and goes to pilot school. Ana is suddenly dull and joyless. She becomes a schoolteacher, but is not fulfilled. She decides to get out of town and goes to Finland near the Arctic Circle, where she meets the first Otto, whom her beloved is named after. Ana writes to her Otto about this final, astounding coincidence. When Otto comes to visit Ana, he parachutes down like the first Otto did and pursues Ana to a final, unexpected close.

This is not a movie for the masses. The Spanish language, slow pace and dreamy photography all contribute to its foreign, art-house style. Likewise, the interplay of generations, the quiet soundtrack, the long speeches, and more make it complex, if not slightly confusing. Back story and current story intertwine, and wordplay is carried on with the character’s name. There is little observable theme or plot, other than to see what happens to these lovers. Yet, their circumstances and long history seem to point to the conclusion that they are meant for each other. This poses the question, “Are two people meant to be together, or does circumstance merely make it look like they should be?” At least for Ana and Otto, who continually make mention that their names are palindromes – the same backwards and forwards – the answer to that question would be a resounding, “Yes, some couples are meant to be together.”

There is no mention, however, of who brings Ana and Otto together; there is no recognition of God. Instead, there is a lot of adultery, leaving your marriage partner, fornication, and fooling around, including when it seems your destined lover is on the lam. Likewise, nudity abounds. Also, although God may often act specifically to bring two people together, people of faith must be very careful that they don’t mistake mere coincidence for God’s perfect will. God may, in fact, often provide us with options, and it is up to us to choose how we want to live, while accepting the consequences.

An odd quiet movie, LOVERS OF THE ARCTIC CIRCLE definitely provides a new cinematic experience. Its moral relativism, confused objectives and very uniqueness, however, will repel viewers concerned about the lack of biblical morality in today’s movies. Perhaps better titled LOVERS WITHIN THE ARCTIC CIRCLE, this movie irritates as much as delights.