ETERNITY AND A DAY 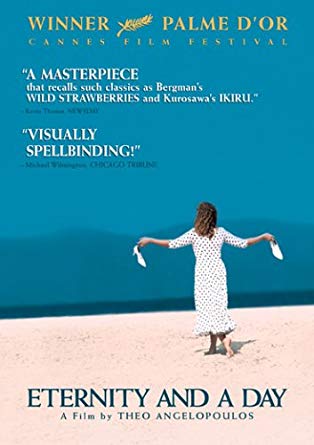 In ETERNITY AND A DAY, the award-winning movie from Greece, a middle-aged writer with a terminal illness gets a new perspective on life from his relationship with a young illegal immigrant from Albania and from recollections of an important day he spent with his wife, their newborn daughter, family, and friends. Slow-moving and pretentious, ETERNITY AND A DAY has some valuable moral lessons and little objectionable content, but a somewhat cryptic ending is not fully satisfying.

Mild moral worldview about the need to love & be loved; one mild obscenity & one mild profanity; mild violence such as police chase boys, men force two boys into truck to sell them to foreigners, & image of dead boy's head in morgue after traffic accident; no sex; no nudity; alcohol use; smoking; and, kidnapping, treating father-in-law badly & emotional distance from family, all mildly rebuked.

It’s an exciting event whenever an award-winning movie from the famous Cannes Film Festival reaches America’s shores. That is why many people may be waiting anxiously for the opening here of the big winner at last year’s Festival, the award-winning ETERNITY AND A DAY by Greek director Theo Angelopoulos. Although there is almost no objectionable content in this movie, most people who see it may wonder just what all the fuss was.

In this slow-moving, pretentious film, Bruno Ganz plays middle-aged Alexandre, a writer in Greece with an apparently fatal illness of some kind. It is Alexandre’s last day in the outside world for tomorrow he admits himself into the hospital, where he expects to die. Alexandre reminisces about a day in 1966 when he and his wife Anna celebrated the birth of their daughter, Katerina, with Alexandre’s mother and some friends and family members. In these scenes interspersed throughout the movie, the audience learns that Alexandre kept himself distanced from his wife, who is now apparently dead. During these scenes, Anna reads a letter she wrote to Alexandre the morning of that day. In her letter, she pleads with Alexandre not to be so distant to her.

As he visits briefly with his daughter and gives his beloved dog away, Alexandre befriends a forlorn little boy who is living on the streets with other illegal refugees from Albania, one of the countries to the north. Alexandre tries to take the boy back to Albania, but the border there has ominous-looking guards and men standing motionless around a large fence. The men are silhouetted against a snowbank in a pretentious, stagy manner that dilutes the dramatic effect of the situation. Alexandre doesn’t have the heart to leave the boy there so he brings the boy back to the city. In the city, while he re-experiences the day in 1966 with his wife, he and the boy discover that the boy’s friend, Selim, has died in a traffic accident. The boy visits Selim’s body and takes his friend’s clothes to the unfinished multi-story building where the other refugee boys live. There, they make a funeral pyre of the boy’s clothes and wish him well on his journey to a better life.

Soon thereafter, Alexandre breaks down while saying goodbye to his now ancient mother, who lives in the mental fog of the past in a nursing home. “Why didn’t things work out the way we expected?” he asks. “Why must we rot? Why have I felt like an exile? Why didn’t we know how to love?” These regrets lead Alexandre to beg the boy to stay with him that night to keep him company, before the boy has to go. They take a magical bus ride together. On the bus, they listen to a young couple quarrel and hear a trio of young classical musicians perform a beautiful piece of music. Finally, a famous, long-dead Greek poet whom Alexandre told the boy about, appears magically on the bus and recites some verse which ends with the words, “Life is sweet.” Alexandre cries after the poet as he leaves, “Tell me, how long does tomorrow last?” but the poet does not answer.

Eventually, Alexandre gets an answer to his question. The movie otherwise ends in a cryptic way, although Alexandre decides he’s not going to check himself into the hospital after all. Standing by the ocean, Alexandre recalls a word game that he and the little boy played where the boy taught him the Albanian words for “little flower,” “outsider” and “very late,” while his mother’s voice calls him in the distance. This scene echoes the first scene of the movie where his mother calls Alexandre as he frolics as a young boy with two friends on the beach.

To love and be loved and to enjoy each passing moment of life with family and friends seem to be the messages that ETERNITY AND A DAY sends. This is a valuable moral lesson, but such recollections of the lessons of the past have been done in a more engaging fashion in such movies as Swedish director Ingmar Bergman’s WILD STRAWBERRIES. In comparison to that movie, this one’s scenes often seem stagey, overlong and pretentious. Also, it takes a long time to get to the moving scenes with Bruno Ganz as Alexandre and Achilleas Skevis as the boy. Finally, the movie is filled with boring scenes of Ganz just standing there or walking slowly as the camera makes small, deliberate, slow pans. This only adds to the dramatic and thematic pretentiousness of the piece. It’s hard to see, therefore, why this movie was so much better than all the other ones at last year’s Cannes Film Festival.