TWICE UPON A YESTERDAY 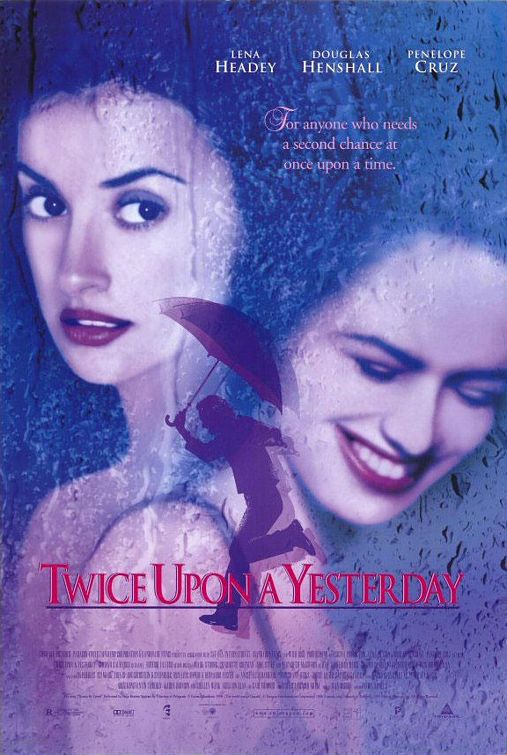 TWICE UPON A YESTERDAY is a romantic comedy from England about a struggling actor who magically goes back in time to try to save his relationship with a beautiful psychiatrist. Funny and delightful, this R-rated movie has fairly strong moral elements in it as the story develops, but it also has a non-Christian worldview and includes some strong foul language, an unnecessary sex scene, some miscellaneous immorality, and an occult plot device where a magic spell is used to transport the protagonist back in time.

Moderately strong romantic worldview with some moral elements & use of magic as a major plot device; 24 obscenities & 9 profanities plus several minor vulgarities & an obscene gesture; mild violence such as pushing & shoving, one slap & some mild, brief slapstick comedy; one brief scene of depicted fornication in bubble bath, implied fornication & couples living together but a strong marriage is seen as an ultimate goal & ideal; upper male nudity & implied female nudity in sexual context; alcohol use & drunkenness; smoking; and, secretly cheating on one's girlfriend, boyfriend or fiance & jealousy.

Summer is the time for action movies with special effects. It’s also the time for romantic comedies that want to soak up the remaining entertainment dollars from people anxious to see something else besides some long-haired dude dressed in a brown robe fighting some crazy-looking red-faced character or Will Smith popping off his mouth while he pops off a few rounds at another freaky bad guy named Dr. Lovelace. An endearing, breezy British import called TWICE UPON A YESTERDAY recently blew into many towns across America to take advantage of this situation. It probably will not garner the box office of the two romantic comedies starring Julia Roberts, but it’s a delightful addition to the mix, though it’s marred by some objectionable R-rated content and a magical plot device.

TWICE UPON A YESTERDAY uses the “magic realism” that modern Spanish literature invented to tell the tale of a struggling actor in England named Vic who goes back in time to correct the mistake he made in abandoning his six-year affair with a psychiatrist named Sylvia for another woman, an actress named Carol. Sylvia becomes engaged to a politically concerned engineer named Dave, but Vic realizes he never should have left Sylvia for another relationship which didn’t work out anyway.

One rainy night, while using a beat-up red umbrella given him by a mysterious red-haired bartender, Vic meets two garbage collectors who are also immigrants from Spain. The two men, who mysteriously know all about Vic’s problem, perform a cryptic magic spell for Vic that takes him back in time eight months.

Instead of telling Sylvia about his affair and leaving her for Carol, Vic says nothing and breaks off his affair with Carol, much to Carol’s angry, and hilarious, chagrin. Vic also starts paying more attention to Sylvia. Their relationship gets stronger, but Sylvia ends up meeting the engineer named Dave anyway, despite Vic’s best efforts. When Sylvia and Dave still fall in love, and Sylvia herself begins to cheat on Vic, the story takes a series of funny twists and turns, resulting in a dramatically satisfying conclusion. Much of the reason for this is that, after Sylvia eventually leaves Vic for Dave, Vic looks for the mysterious red-haired bartender again but runs into another pretty bartender from Spain named Luisa, who falls in love with the hapless Vic. This new development puts a fine suspenseful spin on the plot.

Artistically speaking, TWICE UPON A YESTERDAY is sure to be one of the best romantic comedies of the year. All the leads perform admirably, especially Douglas Henshall as Vic. At first, Vic comes across as a cad and a loser, but when he gets a second chance, he transforms his character for the better. Consequently, it’s easy to root for Vic’s success. The scenes of him trying to prevent Sylvia from falling in love again with Dave are also highly enjoyable. Lena Headey and Penelope Cruz, as the two female leads, ably portray well-rounded, appealing, yet flawed, characters. Charlotte Coleman is a pure delight as Sylvia’s girlfriend, a talkative woman who hates Vic with an enormous passion. Her feeling is completely mutual as far as Vic is concerned, which makes for some entertaining fireworks. In a reserved British way, of course.

Best of all, however, the movie, although R-rated, does not approve of cheating on one’s girlfriend, boyfriend or fiancé. The movie also advocates treating one’s lover or fiancé decently, even when it doesn’t seem to be appreciated or rewarded. Finally, the movie clearly views marriage and family in a positive light, even though this is not emphasized as much as it should be or could be, even given today’s modern hedonistic attitudes. That’s why it may be great if some Christian filmmakers could buy the rights to this script, Christianize the story and characters, and shoot their own G or PG-rated version.

It’s a shame, therefore, that the filmmakers of this movie saw fit to include an unnecessary and crude sex scene in a bubble bath and so many obscene epithets and strong profanities misusing the Names of God and Jesus Christ. Their movie also suggests that it’s okay for couples to live together for long periods of time and fornicate before getting married. Although getting married, making sure you marry the right person, being committed to that person, and even having children are seen as an ultimate goal and valuable ideal, no one in the movie questions whether the new sexual morality about living and fornicating together is, in fact, actually destructive of establishing a positive loving relationship with a member of the opposite sex, not to mention a positive married relationship and family life. Also, the Spanish garbage collectors use a magical, occult spell to transport the protagonist back in time. Finally, despite the fairly strong moral elements in the movie, its worldview is a romantic one that sees people as essentially noble creatures who do not have a sinful nature but who are corrupted by society’s institutions of dating, romance, marriage, and work. Thus, God plays no role here, in spite of the movie’s positive characteristics.

Still, TWICE UPON A YESTERDAY leaves a warm feeling about being able to find someone of the opposite sex to truly love and marry. By the end of the story, you want these characters to find romantic happiness. The movie ably rewards that desire. The wonderful final shot of the movie is a victorious smile of hope. That’s a good way to end any romantic comedy, whatever its shortcomings.

Watch TWICE UPON A YESTERDAY: