AUSTIN POWERS: THE SPY WHO SHAGGED ME 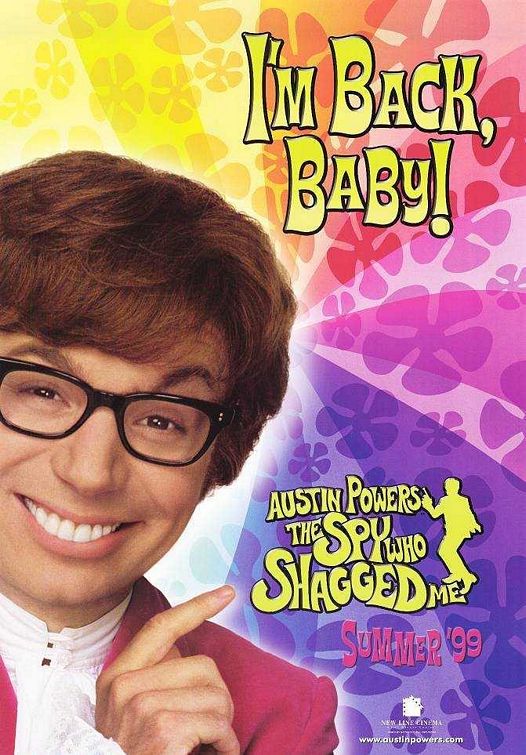 In AUSTIN POWERS: THE SPY WHO SHAGGED ME, Mike Meyers again plays the libidinous, bad-toothed spy. He goes back in time, joins Felicity Shagwell and attempts to stop the notorious Dr. Evil from destroying Washington, D.C. This movie features a bigger cast, a bigger budget and some over the top humor, going well into lewd and sexually charged. This movie should have been rated R for randy and raunchy.

Perhaps the second most anticipated movie behind STAR WARS this summer is AUSTIN POWERS: THE SPY WHO SHAGGED ME. Featuring the same libidinous, out of date, nasty toothed super spy, Austin Powers (played with panache by Mike Meyers), this movie features a bigger cast, a bigger budget and some over the top humor, going well into lewd.

The year is 1999, and Austin Powers is honeymooning with the smashing Vanessa Kensington (Elizabeth Hurley) when he receives an ‘explosive’ surprise. She is not what she seems, and he has to dispose of her, returning him to swinging single status. To make matters worse, Dr. Evil (also played by Mike Meyers) has returned to Earth from his Big Boy space ship and is hatching a new diabolical scheme to annihilate the world. First, he will go back in time to 1969 where he steals Austin Powers’ mojo (or libido), and then he shall go to the moon, install a giant laser and blow up Washington D.C. if he doesn’t get 100 billion dollars.

Luckily, British Intelligence has developed a unique time machine of their own, made of a Volkswagen Beetle. Austin meets Felicity Shagwell (Heather Graham) in 1969 London, and together they battle Dr. Evil, his rebellious son Scott (Seth Green), a 1/8 size Dr. Evil named Mini-Me, an enormous Scottish hitman named Fat B*st*rd (also played by Mike Meyers in fat makeup), a younger number two played by Rob Lowe, and the leader of the militant arm of the Salvation Army, Frau Farbissina (Mindy Sterling). All these, plus a number of other bit performances such as Woody Harrelson, Woody Nelson and Jerry Springer all contribute to the climax where Austin discovers if he has his Mojo or not.

This is a sequel that is getting high praise from many secular critics stating that it has as many or more laughs as the first. For certain, it is earnest and tries hard, providing some very complex sight gags and verbal sexual double entendres. However, what may be coarse joking for the undiscerning, will prove to be too foul for many. In fact, Meyers does go over the top many times with an ongoing joke about the male member, and a shadow sight gag implying various objects being pulled out of various human orifices. Though not reaching THERE’S SOMETHING ABOUT MARY level of taboo, it does cross the line frequently, and, of course, the joking doesn’t stray very far away from Austin and his sexual capabilities.

As with TITANIC, THE SPY WHO SHAGGED ME seems to be pushing the envelope of what is acceptable for PG-13. Parents should realize that PG-13 is a suggestion and that actually a child of any age can see this movie. Hence, sexual humor, body humor and more abound, and monogamy and honor are far from this silly story.

THE SPY WHO SHAGGED ME borrows from just about every James Bond movie, and also makes fun of STAR WARS and JERRY MAGUIRE. It is a pop culture spoof as well as a spy movie spoof. It is projected to make lots of money and is actually one of the few straight up comedy movies of the summer.

Time will tell if this is another THERE’S SOMETHING ABOUT MARY (and a huge money maker) or if it will sink like BASEketball. Cleverness, an all star cast and some witty writing will probably save this movie, but parents also should realize that all the “Hey, Baby!” and “Shagadelic” talk you might hear your teenager mimicking this summer is actually about a sexually charged spy. Sex of course should be fun, within marriage, but Austin Powers is bringing back the Grrrrrr in swinger!