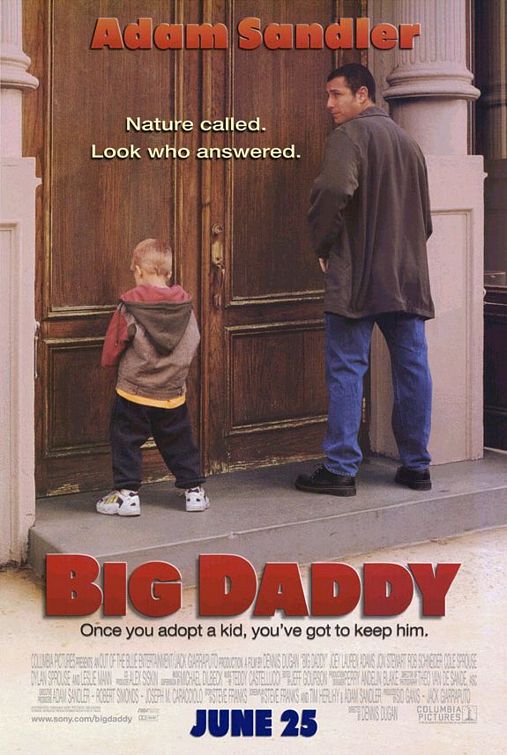 Adam Sandler's new comedy, BIG DADDY, rides the current wave of gross-out comedies, with Sandler having troubles with lots of body fluids from a small boy who comes under his care. Except for the adorableness of the boy and the ultimately moral conclusion of the storyline, BIG DADDY is filled with sickout jokes that are only mildly forgivable because they come mainly from a small child, who doesn't have full control over himself.

Riding the current wave of gross-out comedies, Adam Sandler has troubles with lots of body fluids from a small boy who comes under his care in BIG DADDY. Except for the adorableness of the boy and the ultimately moral conclusion of the storyline, BIG DADDY is filled with groaner, sickout jokes that are only mildly forgivable because they come primarily from a small child, who doesn’t have full control over himself.

Sandler plays 32-year-old Sonny Koufax, who is avoiding adult responsibilities as much as he can, despite getting a law degree. Sonny also avoids career, marriage and cleaning up his apartment in favor of the neighborhood sports bar and endless take-out meals. His roommate, old law school buddy Kevin (Jon Stewart), proposes marriage to his longtime girlfriend Corinne (Leslie Mann), who constantly bickers with Sonny and whose former life included the chucklesome job of a Hooters waitress.

When Sonny’s girlfriend Vanessa (Kristy Swanson) leaves him for a much older man, Sonny adopts a 5-year-old boy named Julian (Cole and Dylan Sprouse), under the false pretense of being his biological father. (Julian’s mother is recently deceased.) Vanessa is nonplussed and doesn’t return to Sonny, so Sonny is stuck with a child for whom he doesn’t really know how to care.

When Julian wets the bed and gets sick, Sonny merely lays newspaper over on top of it. When Julian has to go to the bathroom while walking around the town, Sonny takes him to the side of a building that refused them bathroom entry, and they do their business against the wall. Sonny lets Julian wear and eat pretty much anything he wants and calls Julian “Frankenstein.” Eventually, Sonny grows to love and appreciate the child.

Meanwhile, Sonny shines up to Corinne’s lawyer sister Layla (Joey Lauren Adams). Layla teaches Sonny how to be more responsible with Julian, but Social Services finally discovers he isn’t Julian’s real father. Sonny takes all of his legal counselors (i.e., his friends including a homosexual couple) to court to try to persuade the judge that he is the best person to raise Julian.

The good news about BIG DADDY is that there is no nudity nor depicted sex, and not even much sexual talk. In fact, as Sonny woos Layla, all he asks for is a kiss. (It is implied, however, that he had a sexual relationship with Vanessa.) Unlike the other PG-13 comedy, AUSTIN POWERS: THE SPY WHO SHAGGED ME, this movie has no humor about genitals.

Other good news is that Sonny is corrected and changes regarding some major snafus in child care. (However, like movies such as THE MASK, the entertainment is mostly placed on the bumbling errant version of the same person.) Every irresponsible act he does, he corrects later in the movie. Like the best romantic comedies, Sonny also sloughs off selfishness and irresponsibility and faces up to marriage and raising children. Finally, any woman who is thinking of working at a Hooters restaurant will probably not want to do so after seeing this movie, because it makes a lot of fun of those who do and reveals it to be the degrading job that it is.

The bad news about BIG DADDY is, of course, all the body and toilet humor. In addition to that which was already mentioned, Sonny makes jokes about cleaning up after toilet use and making luggees, basically long strings of spit. Even worse, however, is the many obscenities this movie uses, 38 total, a huge number for a PG-13 movie. This indicates how bad the rating system has become.

Like Mike Meyers of AUSTIN POWERS fame, Adam Sandler is a SATURDAY NIGHT LIVE alum who has found an increasingly larger audience with his sophomoric humor. As long as audiences are skewing young, and the body humor is mixed with a sense of heart and warmth (unlike the bomb BaseKETBALL), the sky seems to be the limit for Meyers and Sandler. Crowds cheered at BIG DADDY, but because it also suggests that we all must grow up, it may be that Adam Sandler eventually will transition to more mature fair, such as what Jim Carrey is now doing. Meanwhile, he brings in the howls and the bucks with small guffaws.