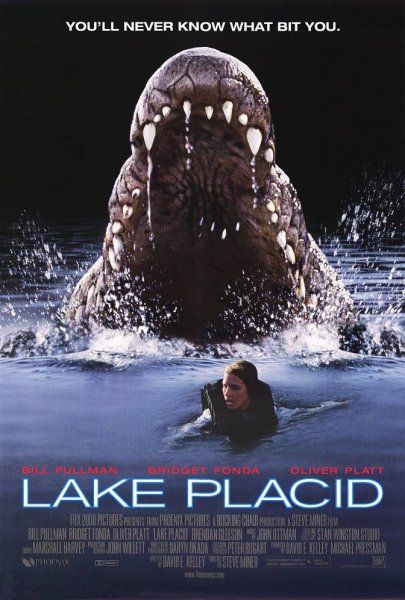 LAKE PLACID is a lightweight, very silly monster movie about a 30-foot crocodile in a remote Maine lake. A sheriff, a crocodile expert, a paleontologist, and a Fish and Game Warden team together to bring the critter down. Gruesome, sometime violent, including more than a moderate amount of crudities and foul language, this movie is a low-grade B-movie for those who truly want mindless entertainment.

They come out every year. They have big scales or antenna, big appetites and bad attitudes. They are: the movie monsters in the B-level movie. In recent years, they have shown up as a large snake in ANACONDA, as a mutant in THE RELIC or even in big budget movies like THE LOST WORLD and GODZILLA as irritable dinosaurs. Undoubtedly with one brain lobe tied behind his back, David E. Kelly, who created TV’s politically correct programs ALLY MCBEAL and THE PRACTICE, wrote and produced LAKE PLACID, a lightweight, very silly monster movie about a 30-foot crocodile in a remote Maine lake.

Starring Bill Pullman, our president in another monster movie INDEPENDENCE DAY, and the always hammy Oliver Platt, and the primarily B-level actress Bridget Fonda, questions arise on Lake Placid when a biologist diver gets himself bit in two by an unknown nasty critter living in the water. The Sheriff, Hank Keough (Brendan Gleeson), tells his buddy, Fish and Game Warden Jack Wells (Bill Pullman), about it. A paleontologist (of course), named Kelly Scott and played by Fonda, hears about a large reptilian tooth found on the body and is sent by her superior to check out this discovery. After camp is set up, a kooky mythology professor named Hector Cyr (Oliver Platt), who believes that crocodiles are sacred, shows up to join the team.

More close calls ensue, a deputy’s head is bit clean off, and an eccentric woman named Mrs. Bickerman, played by Betty White, is introduced. Finally, when a big grizzly bear, (which I don’t believe are native to Maine) nearly attacks the group, the lake monster, a 30-foot crocodile appears and swallows the bear whole. The question then remains, should the group try to capture and anesthetize the croc before the U.S. Wildlife Federation arrives, or should they kill it? After they discover the old woman was feeding the croc whole cows, they use one of her cows as bait. Near deaths occur, the helicopter crashes, Fonda shines up to the Game Warden without any sexual activity at all, and the ending suggests a certain sequel.

Too bad there was too much foul language and some brief but gruesome violent images, or this would be a perfect lazy Saturday matinee movie for the children. It is very simple, with a clear villain and a very understandable script. In fact, most discerning moviegoers will see the script and dialogue as downright silly. The stock, “Watch out!,” “Where is it?” and “Oh, no!” are all uttered. Plus, the predictable motley crew of hunters is gathered, along with a little romance. Yet, of all people, Betty White, shedding her clean woman image while she still can, offers up a few lewd and crude zingers that will make parents want to shield their children’s ears. She and Platt utter the most crudities.

Though probably innocuous and unconvincing to all viewers, parents should also know that Oliver Platt practices a false religion and sees crocodiles as divine. Finally, a little bickering ensues on whether or not to kill the croc or merely sedate it for research. In fact, understanding this miracle of nature, rather than destroy it, wins out in the end. This eco-friendly message also sets up an easy sequel.

LAKE PLACID is filled with dumb writing and many plot holes. How did Platt, one of presumably few crocodile experts, know that this lake creature was a crocodile? It also has many predictable moments. Swimmers confront the croc and doubters get eaten. If you liked to watch T. Rex eat lawyers in JURASSIC PARK, and you also liked to see swimmers sink into the waves like JAWS, then you might like this, but because it borrows from all these movies and more and is written on a 5th grade level, it only serves as a filler for a hole that shouldn’t need filling often – the low-budget creature feature.