IF LOOKS COULD KILL 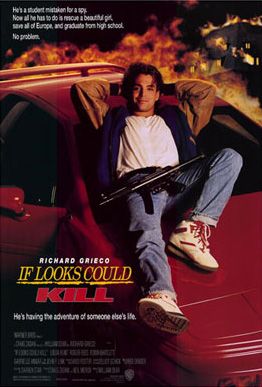 Spoofing the James Bond series, a French class reject gets mixed up in a European espionage ring when his class makes a student trip to Paris.

(LLL, VV) 30 obscenities and 10 profanities; and, moderate amount of violence, but not graphic.

Quite possibly the best spoof to date of the James Bond series, this spy adventure comedy is about a French class reject from Detroit, who gets mixed up in a web of European espionage, adventure and romance.

Forced to join his high school’s French class on a class trip to Paris so he can graduate, Michael Corben gets entangled in a case of mistaken identity with a deep-cover CIA agent by the same name, who is on his way to investigate the killings of three European finance ministers. When the operative is murdered, Michael unknowingly gets tagged with his identity, helped hilariously in great part by code names such as “Mother” and “the French teacher.”

Upon arrival, Michael is whisked off by British Intelligence to a lab where, utilizing the latest in James Bond gimmickry like X-ray glasses and exploding chewing gum, he is equipped for his mission, which is to keep an eye on Steranko, the newly-appointed finance minister of the European Common Market. Michael insists he’s not the person they think he is, but decides to play along, particularly after seeing the fancy automobile that is rolled out for him.

Trying to operate just the windows in the gadget-laden vehicle, Michael quite unintentionally blows a would-be assassin off the road with the car’s rockets. The humorous parody of Bond’s villains and gambling escapades continues, and it is a good one at that. Michael learns that Steranko is stealing and stockpiling gold for a new coin bearing his image, with which the evil finance minister plans to forge a new economic Europe unified under him.

Michael’s French class, meanwhile, has been touring the countryside by bus, with the opposing sides in this covert operation frequently turning up to replace each other as “the new chauffeur.” The movie’s climax takes place at Steranko’s chateau, as Michael’s classmates and French teacher hang suspended in a cage above a pot of boiling gold.

The stunts and action sequences in IF LOOKS COULD KILL rival the best of those in the James Bond and Indiana Jones movies, scenes like Michael pursued by a helicopter’s disengaged whirring blades, or his climactic battle with Steranko’s menacing metal-armed henchman (with a monstrously powerful gold-clawed hand, he’s a hybrid from several of the Bond films). All the while he shouts, “I knew I should have taken Spanish.”

The villains, in fact, are composites of the bad guys that Bond has faced. Their characterizations are excellent as they are able to pull off both comic and deadly persona at the same time. Played with icy flair, Linda Hunt is especially convincing in her role as Steranko’s baroness mistress, who ruthlessly kills by unfurling her gold necklace which she uses as a whip with lightening-fast accuracy.

Of course, what keeps all this from being a film for the family is the needless obscenity and profanity. A somewhat moderate amount of violence is also present, but it is in line with the story and neither graphic nor gratuitous. Moreover, the film makers are at least moving in the right direction by refraining from showing nudity when Michael uses his X-ray glasses at the gambling table to check out several voluptuous women.

Most Bond pictures have the same plot: madman wants to do something fiendish. Bond sent to stop him in various exotic locales with various exotic women. The climax takes place in a large location where Bond is trapped, but manages to destroy villain, location, and all underlings and winds up with a comely miss in his arms.

It’s a winning formula and one that this movie uses effectively in a comic vein. However, because of the aforementioned elements, please exercise extreme caution before going to see IF LOOKS COULD KILL.