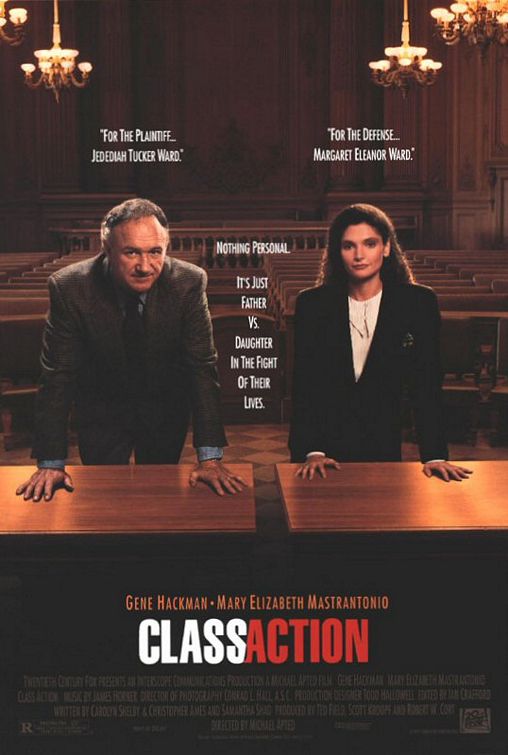 Father and daughter lawyers, with vast political differences and whose only common bond is their dislike for one another, battle each other in a heated class-action lawsuit.

There is more to like than dislike in this courtroom drama about a father and daughter, both lawyers, whose only common bond is their dislike for one another. With vast political differences, they end up opposing each other in a highly charged class-action lawsuit.

Gene Hackman plays Jed Ward, a defender-of-the-masses lawyer steeped in ’60s liberalism, with a penchant for cases that pit the little man against monolithic corporations. His daughter, Maggie, also an attorney, has opted instead for the power suits and plush offices of corporate law. Maggie’s hostility towards her father, however, stems more from the usual mother-raised-me-while-you-were-out-philandering anger, than their political differences.

When a lawsuit emerges over a car that blew up on impact, Jed encourages Maggie to take the case, even though it means they will be on opposing sides. Not wanting the rift between father and daughter to widen any further, Mom urges daughter to drop the case. Having forgiven Jed’s adultery, Mom confides she gained far more by staying than leaving, but Maggie still wants to fight Dad in court.

Using a cheap sideshow trick, Jed wins the first round (the lawsuit involves Argo Motors, the car’s designer, some of which have blown up on impact). Unfortunately, early case strife causes Mom to suffer a fatal heart attack, and during the funeral, Jed and Maggie are brought closer together, though tensions resurface later.

Maggie wins the next round by ruthlessly eliminating an effective witness. Then, she happens onto an Argo Motors’ researcher who cites evidence of a previous circuit flaw that caused the car’s gas tank to explode upon impact when the left turn signal was engaged. Worse still, she learns that her law firm, which represented Argo at the time, knew of an incriminating safety report. However, through simple actuarial analysis, Argo officials deemed it cheaper to pay off lawsuits than to retrofit the cars.

Courtroom dramas are often complicated and hard to follow, but the final courtroom scene makes this one interesting and provocative, and all the while keeps the viewer guessing as to the outcome.

Well-acted, CLASS ACTION is also well-written, except for a promiscuous relationship between Maggie and her boss, which has been inserted to increase the dramatic tension over Maggie’s decision about whether or not to become a crooked team player. This is unfortunate and unnecessary since the music alone would have been sufficient, as it heightens and moves the dramatic tension along quite well.

After so many films that pervert justice in the courtroom, it is refreshing to see these “counselors,” who hold that “lawyers never lie, they just tell the truth judiciously,” get their comeuppance. Christians, however, have the Holy Spirit as their Counselor, and in the course of duking it out in the courtroom, it is He who comes to mind, as father and daughter patch up their troubled relationship. “He will turn the hearts of the fathers to their children, and the hearts of the children to their fathers,” says Malachi 4:6.

Films that show life within a family often depict a marriage that is radically dysfunctional. That is not the case here, as Jed tries to explain to Maggie that, despite his failings, he has been committed to his wife.