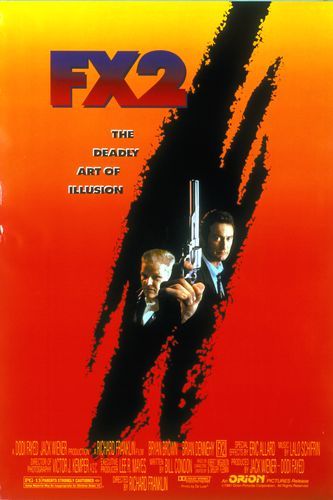 Sequel to the 1986 thriller, which reunites a movie special effects expert with a New York private investigator.

The special effects are considerably cheaper and, well, less special, in this sequel to the ’86 thriller which reunites a movie special-effects expert with a New York private detective.

F/X is the way movie people refer to special effects. As with the first film, F/X 2 begins with a special effects scene in which police blast away at a transvestite robot from the future. However, before long we soon realize we’re just watching another movie being filmed. Rollie Tyler again appears as the cinematic special effects wizard, who is later asked by NYPD policeman Brandon to bait a trap for a killer the police want to nab. Since Rollie is dating Brandon’s ex-wife, he agrees to the favor.

Brandon’s superior, Detective Silac, oversees the nude shower scene that Rollie and Brandon stage to entrap the killer, but the special effects go awry and Brandon ends up dead, as does the would-be assailant. After viewing Brandon’s murder on videotape, however, Rollie concludes that Brandon may have been set up, possibly by Silac. He contacts Leo for help, his New York cop pal from F/X 1 now turned private investigator, who rescues him in the nick of time from a hired assassin.

Leo and Rollie figure out that Brandon was getting close to solving an old case he’d been working on as a hobby, one that involved some Old Testament gold medallions created by Michelangelo for the Vatican which were later stolen from a New York museum. Brandon’s 10-year-old son has more information about the medallions on one of his computer game disks (put there by his father before his death), but he and his mom are chased by Silac’s thug before he can modem all the data.

Leo enlists the aid of a comely assistant D.A. (she turns out to be crooked, too) in order to learn more about a certain prison stoolie placed as ward over an old dying inmate who knows about the stolen medallions. Rollie and Leo follow the stooge while he’s out on parole and watch him retrieve the medallions from beneath the floor of a church’s confessional booth.

Silac and the flunkie arrange to sell the medallions for $10 million to whom they believe are art dealers, but (get this) are actually mob men who want to return the medallions to the Vatican as a way to regain their favored standing. Rollie gets to the exchange site ahead of the others and reaching into his bag of tricks…. Well, you get the idea.

Only the special effects and gimmicks this time around are decidedly low-tech, like: baked beans and hair spray, mashed potato flakes and a fan (for snow), a model boat that fires tranquilizer darts, and a telemetry suit (the most sophisticated) which activates a fighting clown.

Hand-in-hand with the somewhat cheesy special effects go lots of graphic murders and violence, as well as some “fake” female nudity. Although the blood, gore and nudity are “staged” rather than depicted as real, they are offensive nonetheless. F/X 1 merited the R rating given it by the MPAA because of this. F/X 2 should have received the R as well, but didn’t.

Continuing the trend against traditional values, the police antagonist is portrayed, as usual, along with the assistant D.A. as being mixed up with the mob. With over 100 instances of obscenity and profanity heard throughout the dialogue, the film clearly is a waste of time.