HE SAID, SHE SAID 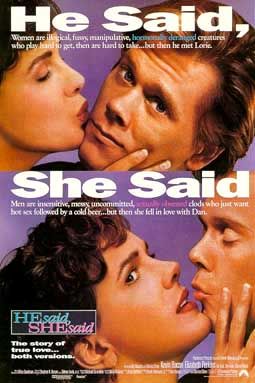 This romantic comedy about two reporters who fall in love despite their inability to agree on any given subject presents their relationship in a unique way: the first half of the movie is told from the man’s point of view; the second half from the woman’s.

Dan and Lorie meet as co-workers on the staff of The Baltimore Sun. He writes obituaries, and she covers weddings. When there is an opening for a columnist that has been promised to each of them, they soon find themselves competing for the position by writing columns that appear side by side.

Their conflicting opinions (he’s conservative and feisty; she’s liberal) create a sensation and an opportunity to intellectually spar on their own TV show, “He said, She Said.” However, Lorie gets jealous over Dan’s attentions to a blond bombshell named Linda and on the air, pitches a cup at Dan’s head that causes a scandal.

HE SAID, SHE SAID has some very funny moments, but unfortunately, contains a sexually immoral view of relationships. Quite the womanizer, Dan is involved sexually with Linda before meeting Lorie. However, when he becomes attracted to Lorie, Dan, in good conscience, can no longer go to bed with Linda. “I should be going to bed with a woman I love,” he tells her. So Dan breaks the relationship with Linda to move in with Lorie.

The sight gags fare no better. Dan imagines the women who chase him as elegant debutantes: Lorie sees them as sluts with breasts spilling out of their dresses. While there may be a very slight message that marriage and commitment are necessary to a relationship, the picture does little to denounce the immoral sexual mores of the day.

Sadly, it seems these days if a wedding does occur in the course of a film, it invariably marks the conclusion of a romance, never the beginning or the middle of one. HE SAID, SHE SAID is no exception. In fact, Dan and Lorie don’t even bother to get married, they just sort of agree to it.

However, to the film’s credit, Kevin Bacon says of his character, “Dan is afraid that a permanent relationship will not allow him to live life on his own terms. Yet, he realizes that this is not the most desirable thing for him or any person.” Elizabeth Perkins, who plays Lorie, observes: “Dan and Lorie looking at their relationship from different points of view is what reality is all about. No two people ever look back on anything with the same perspective.”

Director Kwapis adds: “HE SAID, SHE SAID is about people learning to live with their differences and, perhaps, learning to love their differences.” Even so, because of the sexual immorality, obscenity and profanity in the film, what he says, or she says doesn’t add up to more than a trifle.

Watch HE SAID, SHE SAID: