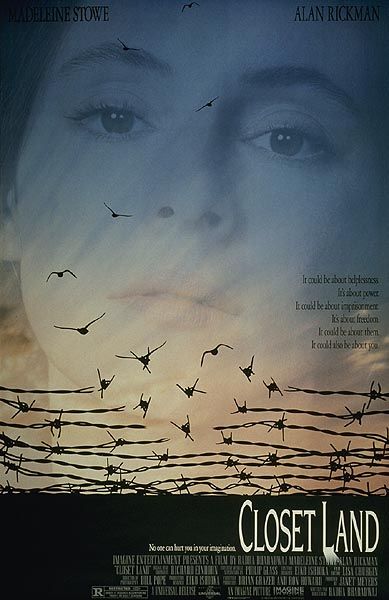 Through a battle of wills, the film CLOSET LAND explores themes of artistic freedom and abuse of political prisoners

The film CLOSET LAND turns out to be another brain-washing film that attempts to arouse the viewer about people being held and tortured as political prisoners in foreign countries. The story focuses on an interrogator relentlessly badgering a female prisoner to force her to sign a trumped-up confession.

As this propagandist film opens, total darkness prevails and muffled, indistinct voices can be heard. The prisoner, an unidentified young woman who writes children’s stories, has been roused from her bed and is being questioned about her latest book, CLOSET LAND. Adamant concerning her innocence, she insists that the friendly red rooster in CLOSET LAND has no political significance.

However, the interrogator, a suave, nameless older man, is not easily put off. At first, he displays some restraint and uses only burning cigarettes and shocking ice water to change the prisoner’s mind.

Before long, however, the interrogator starts to get rough with the prisoner, stretching her out on a slab where he administers electric shocks when she answers incorrectly. He then tries to break her down psychologically by asking her endless, humiliating personal questions about her love life and her troubled relationship with her mother.

At one point, the interrogator renders the woman unconscious, removes her outer clothing, leaving only black underclothes, and smears makeup on her face so she appears clown-like. Then, he demeans her, making her walk around the room and pose in front of a misleading screen where he snaps her picture.

Film’s end offers no resolution to this senseless interrogation as the prisoner steadfastly refuses to sign and rips the confession to shreds. The entire action takes place in a cold, stark-white, sparsely furnished room complete with a set of drawers containing various implements of torture.

The message appearing on the screen at film’s close urges amnesty for political prisoners in foreign lands, and for the first time, the viewer understands more about this low-budget, go-nowhere movie.

Considering the exorbitant amount of money invested in such a worthless film, one is reminded of the Almighty’s question in Isaiah 55: “Why do you spend money for what is not bread, And your wages for what does not satisfy? Listen carefully to Me, and eat what is good, And let your soul delight itself in abundance.” In short, CLOSET LAND should have stayed in the closet.