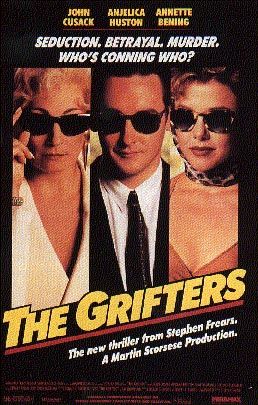 The parallel lives of three con artists, a penny-ante operator, his mother and his cunning girlfriend, begin to intersect in increasing sordid and incestuous ways, culminating in a dangerous three-way con game fated to yield a costly pay-off.

Pushing its themes of deception, betrayal and seduction to the limit, THE GRIFTERS is about three con artists, or grifters, so steeped in the art of deception that they can’t see how they have conned themselves.

Set presumably in modern-day Los Angeles (the opening credits appear over grainy black-and-white stills of a timeless citiscape), these swindlers are first introduced through a clever, three-way split screen, in which each is seen to be hard at work at his own scam.

Lily Dillon works the racetrack as an errand girl, where she lowers the odds on long shots for Bobo, her bookie/mobster boss. Next comes her estranged son, Roy, a nickle-and-dime operator who, shortly after we meet him, receives a near fatal jab to the gut from a barkeep he has tried to chisel. Lastly, there is Myra, Roy’s girlfriend, a high-class hustler who suckers oil tycoons for big bucks.

Having had Roy at 14, Lily hasn’t had much to do with him since. She does, however, want to make up with her long-lost son, as Roy has never forgiven her for neglecting him. In California on Bobo’s business, she stops by to see Roy in his seedy hotel room.

When Lily discovers Roy is suffering from peritonitis, she whisks him off to a hospital, stating that she wants Roy to give up the grift and try the straight life. She tells Roy he is not cut out for the rackets, but Roy says he will make his own decisions. Myra, meanwhile, has her own plans for Roy and intends to make him a partner in her elaborate oil-scam schemes at any price.

As the young con man struggles to find his own identity through independence, the two women battle viciously over Roy’s soul. The rivalry soon escalates into a dangerous battle of wills. When Roy backs away from teaming up with Myra, she blames his mother and sets out to waste Lily. However, as the old pro whose will to survive knows no obstacle, Lily turns the tables by killing Myra, then assumes her identity, mainly to avoid the wrath of Bobo, who has found out about Lily’s double-dealing at the track.

Lily thinks that, like Roy, she, too, can now make a clean break from the grift and start over. However, she needs Roy’s stash to do so, and, when he adamantly refuses to give it up, Lily attempts to proposition her son. The film ends in an appalling spasm of violence.

THE GRIFTERS is film noir at its worst. The movie is essentially a tug of war between two predatory women, who in Roy’s mind become very much the same woman. As Myra and Lily struggle for Roy’s soul, it is easy to see that Roy doesn’t trust women and is, in fact, getting even with his mother by throwing away his life.

There is no honor among thieves here. In fact, the trio of scam artists save their deadliest tricks for each other. Myra, in particular, plays off the vulnerabilities and incestuous vibes of mother and son. In the 18th chapter of Leviticus, however, a summary of the laws against incest appear in verses 7 to 18. The death penalty for incestuous relations is specified in chapter 20.

Why, in this sordid psychodrama, does a mother consume her young? THE GRIFTERS reaches an uncompromisingly bleak conclusion: because she is hungry. In addition to themes of gross sexual immorality (full female nudity occurs), THE GRIFTERS is also about greed: not just in having money, but in getting money. In one scene while Myra watches Roy work his con, her face is literally radiant with greed. Consequently, no one in his right mind should want to see this movie.