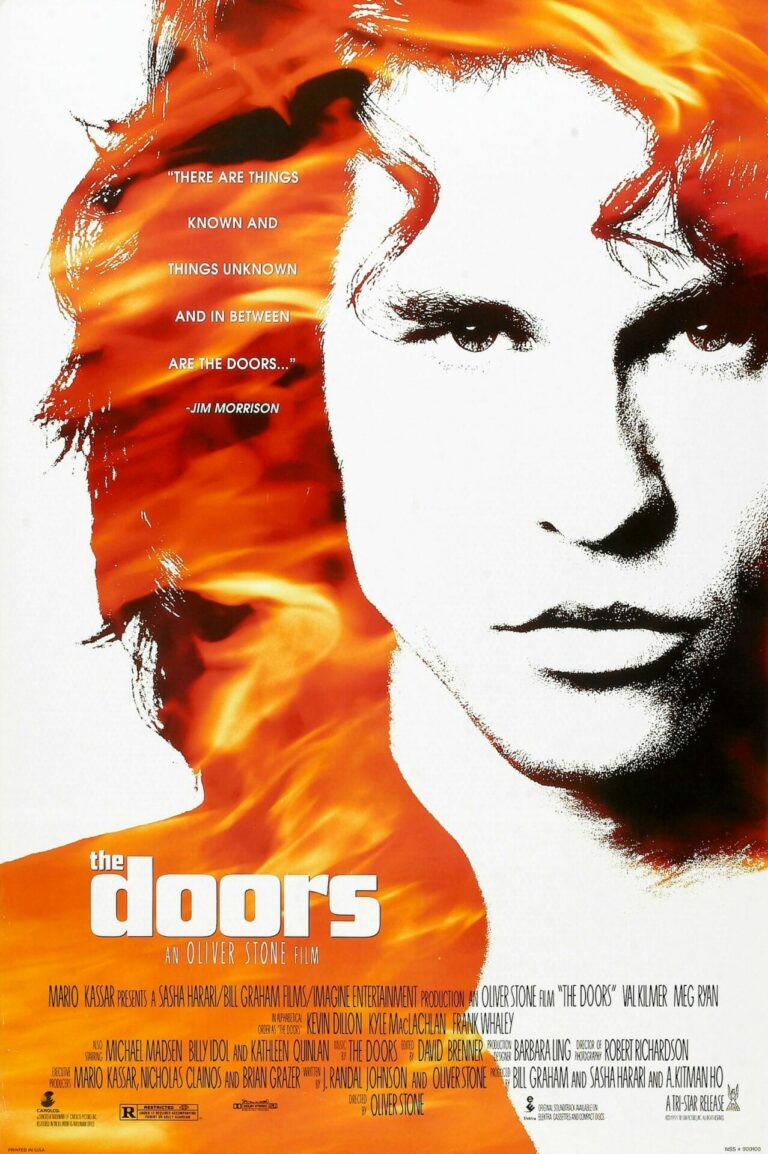 A musical biography about 60's rock-star Jim Morrison, a self-proclaimed Shaman who, after a drug-induced, mind-expanding experience in the desert, shares his offensive poetics with his rebellious, anti-establishment fans via a rock band, "The Doors".

Set in the 1960’s, THE DOORS tells about rock singer Jim Morrison, a self-proclaimed Shaman who, after a drug-induced, mind-expanding experience in the desert, shared his offensive poetics with his rebellious, anti-establishment fans via a rock band, The Doors. The film reeks of the occult, sex, drugs, and far-out, obscene lyrics.

Sometime after his arrival in Los Angeles, Morrison abruptly quits UCLA film school, taking up with Pam Courson, who becomes his common-law wife. Not your run-of-the-mill college drop-out, Morrison drops acid and asks his friends questions like, “How many of you people are really alive?” and “Have you ever seen God?”

Morrison fashions some of his poetry after the likes of 18th-century mystic, William Blake, but he also reveals an obsession with death, which becomes a prominent poetic theme. After he meets up with the rest of the band, “The Doors” are born.

Just before his career is launched, Morrison has a mystical experience in the desert. Here, he and his friends get stoned on mind-expanding, consciousness-devouring drugs like LSD. Morrison enters a cave where he strokes and kisses a huge snake, representative of Satan, and encounters an old, sage-like Indian, who turns up periodically and seems to be Morrison’s medium.

Through The Doors, Morrison creates a grandstand from which to inform the world of his demonic vision. After performances in Venice and Sunset Beach, the Doors have a hit with, “Come on, Baby, Light my Fire,” and soon are in big demand all over the country, even appearing on The Ed Sullivan show.

The film now flashes to San Francisco in 1967 where the group plays, and Morrison sings. Flower children, amid various stages of dress and undress, dance to lyrics of love and peace. The band also plays in New York, and the crowd goes wild over their performance, but especially Morrison’s. Like a young Dionysius, Morrison seems to call forth an inspired frenzy in his fans: numbers of women take off their clothes, dance up to the stage, and throw themselves at his feet. A female photographer takes pictures of him in alluring, sexual poses while she demurs, “It’s you they want, you they love, you they worship. You’re the god of rock!”

A trendy female reporter, Patricia, also likes what she sees in Morrison and seduces him. After they make love in a very explicit scene, Patricia introduces him to a satanic ritual, and they slit their wrists and drink mingled blood.

Concerts all over the country follow, with memorable ones in New Haven (a near-riot ensues) and in Miami, where Morrison exposes himself on stage. This scene stands out as particularly offensive. Numerous women dance naked as a tripped-out Morrison sings filthy lyrics about love before shedding most of his clothes. For this, he lands in court facing four counts of obscenity.

In 1971, a disenchanted Morrison, accompanied by Pam, leaves the rock scene and travels to Paris to start anew as a poet. He lives only a short time, suffering a fatal heart attack. He is 27 years old.

Unfortunately, THE DOORS is an extremely powerful, well-constructed film that openly glorifies Morrison. The scintillating special effects and lighting explode across the screen and combine to create powerful, unforgettable images. How tragic that the images one remembers consist primarily of Morrison’s revolting, immoral behavior and of his being stoned from drugs and alcohol.

THE DOORS can only provide impressionable young people with despicable examples of immorality, rebelliousness, drugs, and the occult. All too loudly is heard the message: “A man reaps what he sows.” In Morrison’s case, what he reaped was a debauched, untimely death, a reminder that the “wages of sin is death” (Romans 6:23).