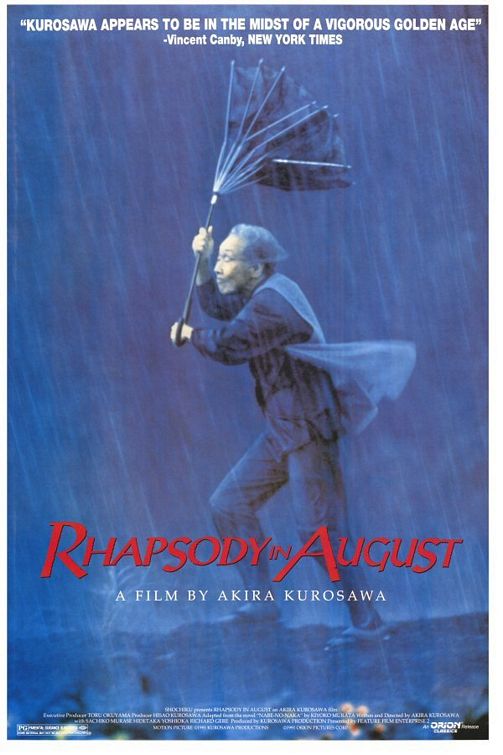 RHAPSODY IN AUGUST is Akira Kurosawa's magnificent movie about the bombing of Nagasaki in 1945 and the ripple effects on a contemporary Japanese family and their Japanese-American relatives. Typical, well-done Kurosawa movie with his humanist touch, but unfortunately, the film is also "politically correct" and never addresses the rabid Japanese fascism that led to this drastic measure.

A compassionate Japanese view of the effects of the nuclear bomb dropped on Nagasaki that does not take into consideration the rabid Japanese fascism that led to this drastic measure.

Set in contemporary Japan, RHAPSODY IN AUGUST is a political coming-of-age story. Four young cousins (ages 10 to 16) come to visit their grandmother for the summer, while their parents vacation in Hawaii with a rich uncle who emigrated to America many years ago. In the course of the summer, through the sometimes strange, sometimes scary, always interesting stories of the grandmother, the children come to realize how horrible and how powerful was the effect of the atomic bomb dropped on Nagasaki.

While visiting a memorial at a nearby school, they learn that their grandfather (the grandmother’s husband) was near the school when the bomb hit and his body was never recovered. They learn, too, that one of their uncles witnessed the flash of light from the bomb that “opened up like a giant eye in the sky,” and since that day he has confined himself to a room drawing pictures of the “giant eye in the sky.”

Through letters to their mothers and fathers, the children also come to see that their parents are preoccupied with forgetting about the past so that they will not offend their rich Japanese-American relatives living in Hawaii. (One of the fathers hopes to get a job on the large pineapple farm that the grandmother’s brother owns.)

The oldest of the grandchildren, Tateo, innocently sends a letter to Clark (Richard Gere) the American-born grandson who runs the pineapple farm, telling him that his grandfather was killed by the bomb on Nagasaki. This upsets the parents greatly for they had carefully hidden this information so as not to offend their American relatives.

Clark, eager to show his sorrow, visits the grandmother. This causes much apprehension and embarrassment to the cousin’s parents who blame the children for this very socially embarrassing situation. Eventually, there is reconciliation among the family members over the terrible tragedy that had disrupted their family. (As a symbol of this new social harmony Tateo finally tunes his grandmother’s pump organ that he had been working on all summer.)

However, this is no simplistic story with a happy sentimental ending. The grandmother, during a thunder and lightning storm has a flashback to the day of the bomb and rushes out into the storm to save her husband. Concerned for her, each of the grandchildren and their parents, rush out after her. In the imagery that Kurosawa is noted for, we see each of them in slow motion running madly in the storm to save her, and the film ends with the unforgettable image of the grandmother struggling to open her umbrella as the wind and rain lash against her.

Akira Kurosawa is one of the grand masters of world cinema. His films are often greeted with eager anticipation by those familiar with his work (RASHOMON, SEVEN SAMURAI, YOJIMBO, RAN, etc.). A compassionate humanist who sees the good in the struggling weakness of man, he is a brilliant filmmaker who creates both stunning images, moving characters, and brilliant acting performances.

In this, his most recent work, he does not disappoint us. RHAPSODY IN AUGUST is a gentle moving look at the complex relationships that bond many Japanese families. This film is laden with extraordinary performances, chief among them being Sachiko Murase as the grandmother. (She so brilliantly performs her role that my wife thought she was a real grandmother, not an actress.) The imagery, too, is exceptional: the stories under the moonlight, the eye in the sky opening up, and the storm sequence.

Yet, for all his cinematic brilliance, Mr. Kurosawa gets caught up in the “political correctness” ethos that chokes our era. Yes, the dropping of the atomic bomb on August 9, 1945, was one of the most horrible moments in the history of modern warfare, but so, too, were the death and destruction of the hundreds of thousands of Chinese, Koreans, Indonesians, and Americans who suffered from the fascistic lunacy that Imperial Japan fostered during World War II. Kurosawa, the true “humanist,” should have at least brought up this argument somewhere among the family members. Instead, we get a political education of the terrors of “the Bomb” without a balanced historical context.

Missing, too, is the key ingredient to any true reconciliation–forgiveness. In the end, the children learn about the horrors of the bomb, the parents continue to cover it up, and the grandmother remains lost in the terror of bad memories. There is no true reconciliation here because there is no real understanding of the nature of sin and the need for repentance and grace to heal its consequences. For all his skill and worldly wisdom, Mr. Kurosawa leaves the audience, like the grandmother, struggling against forces she cannot understand. Pray for Mr. Kurosawa that he may discover the Truth he so passionately seeks in the wonderful films he creates.