LET HIM HAVE IT 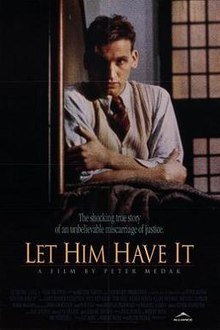 LET HIM HAVE IT are the words that seal the fate of Derek Bentley, a slow-witted 19-year-old with an I.Q. of 66, who, in 1952, became the first man in recent British judicial history to be executed despite a jury's recommendation for mercy. LET HIM HAVE IT is a smooth, cool presentation of Derek's life--a fascinating story that holds the audience's attention right up the very end.

LET HIM HAVE IT are words that seal the fate of Derek Bentley, a 19-year-old epileptic who becomes the first man in recent British judicial history to be executed, despite a jury’s recommendation for MERCY. In 1952, Derek is found on the roof of a south London warehouse as an accessory to a murder committed by Chris Craig, his streetwise 16-year-old friend.

The victim is a police officer, but the killer is too young to receive the death penalty. Almost an adult, Derek can not read, having an I.Q. of 66, and a mental age of 11.

The story begins after World War II, when guns and military paraphernalia are in abundance around London, and teenagers are getting out of hand. When Chris and Derek go to trial, the pressure is on to make an example out of them. Derek becomes a convenient scapegoat, never offering much resistance at a trial that makes no mention of his mental handicap and lasts only two days.

Derek’s supposed cry of “Let him have it, Chris!” to his gun-wielding friend thus becomes a crucial piece of evidence. However, is Derek telling Chris to shoot the officer, or to hand over the gun?

LET HIM HAVE IT says a lot about popular culture. Chris and Derek’s relationship begins when volatile Chris takes a liking to shy, ungainly Derek, insisting that he became part of the gang. Once initiated, the group wears black raincoats and black felt hats, Hollywood style.

Not long before the rooftop shootout, Derek spies a beautiful blonde in a record store. He later discovers the same blond dating a local gangster and makes an irrefutable connection between organized crime and glamour.

Even so, the glamorous gangster lifestyle attracts Derek. Like many outcasts, he is lured by acceptance into the inner circle; yet, he is portrayed as innocent, plodding, dreamy, and easily-lead.

In bewilderment, Derek’s family attempts to monitor his activities. They notice their son’s sharp new clothes and changed outlook. His father realizes something is wrong when Derek gives out stolen Air Force cigarettes as a gift.

LET HIM HAVE IT skillfully develops the character and fabric of Derek’s affectionate, well-meaning family. However, it is almost surprising that his father is unable to protect or control his son, although this element does give the story much of its power.

Evidently, the Derek Bentley case remains well-known in Great Britain, even 40 years later. LET HIM HAVE IT is a smooth, cool presentation of Derek’s life, leading to a swift but transfixing climax. Even without first-hand knowledge of the case, this fascinating story holds the audience’s attention right up the very end.

Watch LET HIM HAVE IT:

Writer: Neal Purvis, Robert Wade (based on a true story)