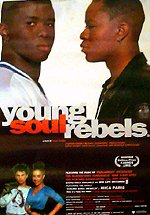 YOUNG SOUL REBELS concentrates on the punk-rock scene in 1970's England from the point-of-view of Chris, a heterosexual, slightly effeminate mulatto, and Caz, a macho, black homosexual who operate a music station, Soul Patrol, each night. The movie tries to do too much in its plot which leads to confusion. It also contains fornication and homosexual scenes.

YOUNG SOUL REBELS, whatever else it is, is true to its title. The movie, set in late 70’s England amid the era of punk rock, deals with two young black Englishmen and their attempts to be accepted in the major music circles in England despite the many obstacles against them.

The two black men, Chris (Valentine Nonyela) and Caz (Mo Sesay) are an odd couple who have known each other since childhood. Chris is mulatto, slightly effeminate and heterosexual; while Caz is black, macho and homosexual. Each night on their station, Soul Patrol, they broadcast the latest records by Parliament and Funkadelic and other late-1970’s funk luminaries. The movie’s perspective on the halcyon days of punk culture is black-oriented.

Chris and Caz belong to an exuberant corps of brightly attired soul brothers and sisters who share the streets with spiky-haired punks, disco-hopping sodomites men and ominously glowering skinheads. The film’s social nexus is an interracial, omni-sexual dance club called the Crypt.

Early in the movie, T.J. (Shyro Chung) a close friend of Chris and Caz, is slashed to death while cruising a park. A little later, Chris visits the scene of the crime and finds the boom box T.J. was carrying when he was killed which contains a tape of the killer’s voice. Of course, the police arrest Chris for T.J.’s murder when they discover the boom box in his possession.

In reality, YOUNG SOUL REBELS attempts too much. Although Chris is released near the movie’s end, several other plot strands are left dangling. What becomes clear is the racial harassment heaped on Chris by the police. Thus, even though he is freed from the murder charge, in numerous other ways, he remains a prisoner to his own passions, lusts and worldly goals.

The movie does achieve, however, a subtle analysis of the schisms in London society in scenes of the local street life, where tensions are often on the verge of erupting into violence. The movie also portrays Chris and Caz in an engaging light. They emerge as real people with real dilemmas, even if we take exception to their lifestyles. Chris’ meeting and subsequent courtship of Tracy (Sophie Okonedo), who works for a commercial radio station, is awkward yet somehow refreshing. What a pity that their relationship did not stay at this stage but degenerated to the low of fornication.

The worst aspect of this film, however, is the depiction of homosexual kissing and hugging. The movie fades out, fortunately, without showing any graphic scenes, although we see the two men in bed together.

With a movie like YOUNG SOUL REBELS, one wonders anew, “Why this waste?” The film’s characters, like the filmmakers themselves, reveal themselves to be aimless and lost. As Jesus warned in Matthew 7:13: “Enter through the narrow gate. For wide is the gate and broad is the road that leads to destruction, and many enter through it. But small is the gate and narrow the road that leads to life, and only a few find it.” Let us pray that people like Chris and Caz and the makers of YOUNG SOUL REBELS will find the narrow way that leads to life.