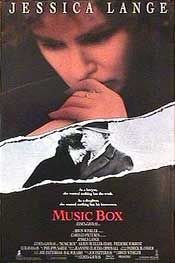 One profanity and descriptions of gruesome murders and rapes.

Politically tame compared to his critically acclaimed and highly leftist body of earlier films, director Costa-Gavras’ MUSIC BOX is neither propagandist espousal like his abhorrent BETRAYED, nor palatable entertainment like his JAGGED EDGE. It’s simply a boiled-down, contemporary courtroom drama about an elderly Hungarian immigrant to America who has been served deportation papers by the U.S. Attorney’s Special Prosecutions Office, which suspects him of being a pro-National Socialist (Nazi) escapee. Jew or Gentile, we are all on the same side of justice when it comes to the condemnation of National Socialists and the atrocities they committed. However, it’s hardly the first time the subject, National Socialist war crimes, has been tackled, and it is definitely not the best.

When gentle, grandfatherly Mr. Laszlo goes on trial for having falsified papers over 40 years ago on his application for U.S. citizenship, he is represented in court by his duly loyal daughter Ann, who never once doubts his innocence. Prosecuting attorney Jack Burke, on the other hand, never once doubts Laszlo’s guilt. He’s been looking for the “cold-blooded killer” and “scum of the earth,” as he calls him, for decades. Burke has a strong case against Laszlo, and it doesn’t help matters that the presiding judge is Jewish.

As the case against her father progresses, and the prospects for his acquittal worsen with each new piece of corroborating testimony from victims that Burke presents, Ann gets taken on a journey, both figuratively and literally, along the road that leads to truth. Ending up in Laszlo’s native Hungary, she collects two important pieces of information. One of them, proof of an accuser’s lack of credibility, decides the fate of the court case. The other, a claim ticket to a music box Laszlo pawned many years ago in Chicago, leads to the master evidence — yellowed, incriminating snapshots hidden inside the box — that will decide the fate of her relationship with her father.

The script raises good questions about how prejudice can cloud one’s judgment, both from behind the bench and in front of one’s family. However, it plays like it would have been better suited for TV, a whodunit with telegraphed clues and commercial cues. It also takes an irreverent stab at Christianity when Lange’s character (ill-cast and unconvincing as Ann) ridicules her opponent early on for taking desperate measures by chiding him: “What’re you gonna do next, find Jesus and get yourself born again?”

The film wants you to still be asking, “Is he guilty or not guilty?” when the jury is about to render its decision in the final ten minutes. However, you’ll have probably made up your mind — correctly, too — in the first ten minutes. Therefore, the verdict is in… Avoid THE MUSIC BOX.