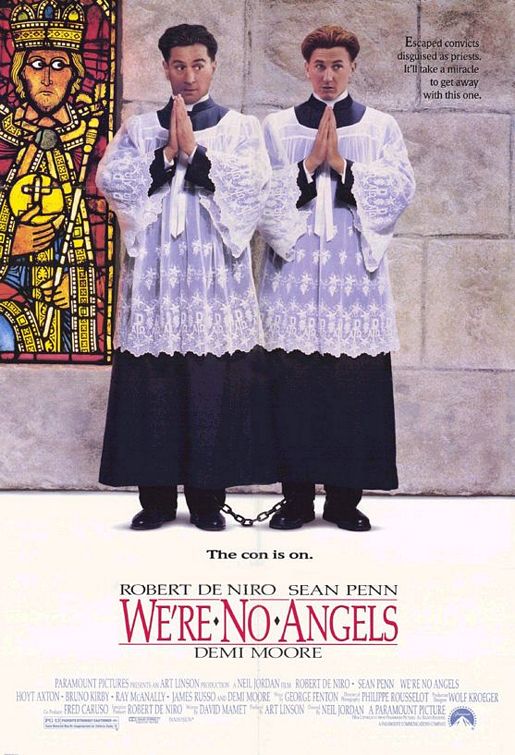 WE’RE NO ANGELS cries out to the pagan world: “It’s OK to believe.” Yet, the story, based on the 1955 Humphrey Bogart crime-comedy by the same name, wallows in such depravity that it’s hard to find its conclusion convincing.

Ned and Jim are two small time, Depression-era hoods who have been sentenced to hard labor. Forced to participate in a prison breakout, the two convicts are on the lam when they take refuge in a New England town famous for a miraculous Shrine of the Weeping Madonna. They are in need of a miracle themselves if they’re going to dodge the warden, the sheriff, the deputy, and the other officers intent on recapturing them. The authorities would prefer to bring them back dead instead of alive.

Because they are disguised as clergy, the townspeople think they have found Father Riley and Father Brown, two priests the local monastery is expecting for the annual procession of the shrine. Unintentionally, Ned and Jim find themselves doing good deeds while they attempt to negotiate themselves through the intricacies of Catholic faith so they can be included in the monastery’s annual parade that will march them over the bridge to freedom in nearby Canada. After much cursing, lusting, complaining, and killing, prayers are answered, miracles occur, Ned preaches a sensitive sermon, and God’s glory shines over the monastery. Clearly, this film cries out in the darkness of an unbelieving world that God exists. Unfortunately, the decadence of disbelief is portrayed with such clarity that it detracts from the message. A peeping Tom, upper body nude scene, harsh profanities and selfish prayers linger in one’s mind long after leaving the theater, overshadowing the redemptive message proclaimed at the end.

In fact, there are many parts of the movie that mock Christianity and, in particular, the Catholic faith, though those who do the mocking are clearly the bad guys. Even the press surrounding the film twists Scripture out of context (perhaps unintentionally), by quoting Hebrews 13:1, “Do not neglect to show hospitality to strangers: for thereby some have entertained angels unawares.” At least, Ned and Jim admit that “We’re no angels.”

Unfortunately, like many remakes, the movie often drags. Also, the direction is spotty, with many scenes in the film standing out like a sore thumb. The movie frequently stretches one’s credibility, suggesting that the director did not think through the script to make it real.