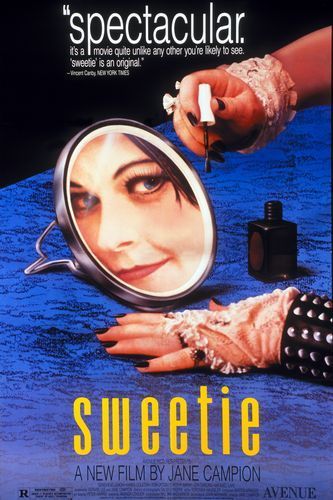 Screened at the New York Film Festival, SWEETIE is a stark familial tragedy involving neurosis in a sibling relationship. Kay is a withdrawn, repressed young woman of limited imagination. She is uncomfortably dispassionate, calculable and placid. Sweetie, on the other hand, is a demanding, uncontrollably aggressive psychotic with an insatiable desire for attention. She is frighteningly unpredictable, sensual, fat, and pitiful. The story centers on Kay whose life involves three issues: her belief in dreams and tea-leaf reading, her live-in boyfriend’s fascination with TM (Transcendental Meditation) and, mainly, her sister’s consuming lunacy.

The plot is a chronology of a tragic situation involving a family with a not-so-typical problem: Sweetie. The audience is introduced to the story through Kay, who leaves home for the first time with a boyfriend and is adjusting to her domestic (albeit promiscuous) arrangement with great difficulty. To make matters worse, in moves Sweetie, following Kay’s example with her own demented version of a live-in beau. The parents have temporarily split up over the recurring tiff — what to do with Sweetie. As the family desperately tries to reunite, chaos blankets their lives with a no-win circumstance.

Though great strides have supposedly established the field of psychology, there is still an equally great lack of direction for handling severe cases of borderline insanity. SWEETIE illustrates this point. The acting and story (though at times hard to follow) are credible and believable. The story, however, portrays a reality without Christ and unintentionally reinforces a truism: Families that pray together stay together. In this regard, SWEETIE has a lesson hidden in its realistic depiction of neurosis. Unfortunately, the film is laced with sexual situations and nudity to enhance realism. In fact, it is so clouded with offensive content that the recommendation is to skip this otherwise unique approach to film making.