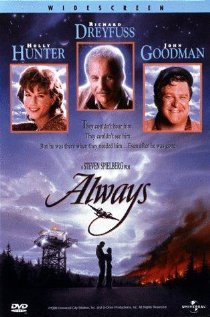 “It is appointed unto man once to die, and after that the judgment” (Hebrews 9:27). However, when Peter (Richard Dreyfuss), a Montana forest-ranger and daredevil fire-fighting pilot, flies to his death trying to save his friend Al while fighting a fire in the Northwest, he does not proceed to judgment. Instead, he finds himself in the woods as an unseen spirit talking with a woman in white named Hap (Audrey Hepburn).

Explaining to Peter that he is now a “spiritos,” or “divine impartation,” Hap reminds him of times in his life on earth when he was in trouble, only to be saved by timely wisdom from a little tiny voice inside his head. That, she says, was actually someone’s departed spirit speaking to him and giving him guidance. Now, he must go and do likewise.

Since his wife, Dorinda (Holly Hunter), is having trouble dealing with his death, Peter gives encouragement to her and Al, his rowdy best friend who can’t seem to help her. When Ted, a young newcomer pilot, arrives, a love triangle develops in which Peter tries at first to keep Dorinda away from Ted. Then, in his new state of spiritual existence, he realizes he must let go of Dorinda just as she must let go of his memory. As Hap puts it, “You will find your freedom as you let her have freedom.” So, he no longer whispers inside her head, “you know you’re still my girl,” but rather helps her find the strength to love again.

ALWAYS is so steeped in the New Age gospel of spiritism that one wonders if Shirley McLaine was the technical consultant. That “still, small voice” that speaks to us is from God (1 Kings 19:12), not departed spirits acting as guardian angels. Furthermore, the only love so strong that it can triumph over the grave is not the kind found in this movie, but in the resurrecting power of the Holy Spirit imparted to us when we accept Jesus into our lives. Most important, God abhors spiritism:

“And the soul that turneth unto them that have familiar spirits, and unto the wizards, to play the harlot after them, I will even set my face against that soul, and will cut him off from among his people.” – Leviticus 20:6

Incidentally, the script is a rather poor reworking of A GUY NAMED JOE (1943). The ending is particularly disappointing, and several unimportant scenes drag tediously. The special effects of aerial fire-fighting are good, including footage of the 1988 Yellowstone fire, but there are too few of them.