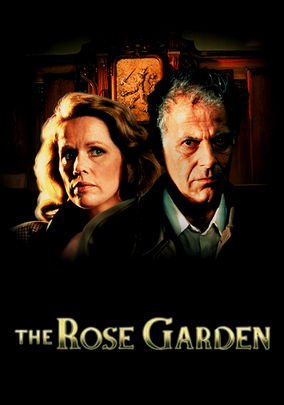 A couple of crudities and actual hangings shown of children.

THE ROSE GARDEN is a contemporary drama about one of the Nazi’s last atrocities: the 1945 hanging of twenty innocent Jewish school children who were used for medical experiments in Neuengamme’s concentration camp in Hamburg. Set in Berlin, Gabriel Freund (Liv Ullmann) is a tenacious Frankfurt public attorney defending an old man accused of attacking, apparently without reason, another elderly man at the Hamburg airport.

Aaron Reichenbach (Maximillian Schell) is the enraged, troubled, Jewish defendant who has accosted, evidently, the camp commandant responsible for hanging the twenty children, including Aaron’s two sisters whom he had given up for dead. Though guilty, Reichenbach will not communicate with anyone, not even his lawyer, Freund. Thus, she is unable to mount a defense to prevent him from spending several years in prison. To her rescue comes a Nazi-hunting journalist with information on the camp commandant, and Freund decides that her best defense is a good offense. With the help of the journalist and the coerced aid of her ex-husband (Peter Fonda), she attempts to prosecute the commandant for his war crimes. She and her small daughter are then intimidated and harassed to drop the case by the Germans and a legal system that would rather forget Germany’s past.

This might have been a truly engaging film, but it contrives to make every decision for us and burdens the viewer with extraneous, overwritten dialogue about the character’s thoughts, emotions and motives which trivializes the real horror. Thus, the film feels longer and is less involving than it otherwise could have been. The film’s most important function is that it adds to our knowledge of the holocaust and shows the absolute evil which can so blind men that they can hang powerless, innocent children, and that can blind others who presumably should seek justice for such acts.