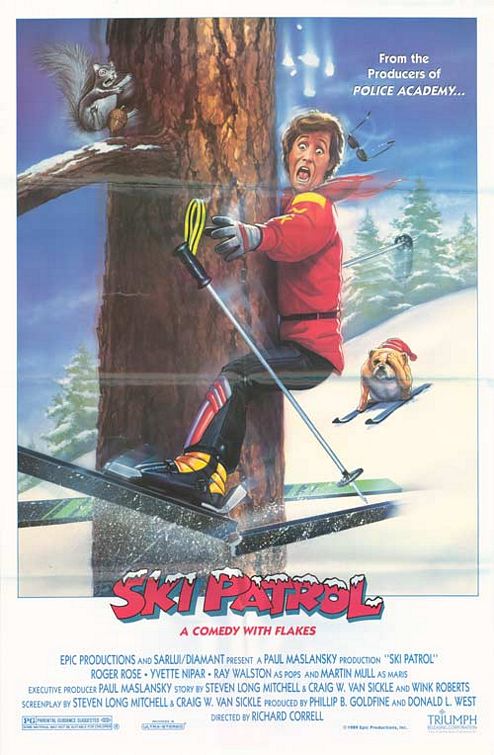 Like a tumbling snowball, the only way SKI PATROL travels is downhill. The movie’s ad campaign, “A comedy with flakes, should read, “Some flakes without comedy.”

Maris wants Pop’s Snowy Peaks ski-resort. Seeing that Lance, the ski-pro, hates Jerry, the head ski-patroler, he pays Lance to sabotage Snowy Peaks’ safety record so that its 40-year lease renewal will be denied. Then, Maris would get the resort while Lance would be rid of Jerry.

The rest of the story is unbearably ridiculous, from Jerry’s love interest, Ellen, to fellow ski-patrol member Eddie being thrown in jail, so that his friends have to bail him out by staging a talent contest. There’s also a litany of other characters and events occurring ad nauseam, including ski stunts, a dog that burps, ethnic impersonators, mice on an anniversary cake, a short person, a sexy foreigner, a dancing geek, a wacko, a delicate snow-mobile crash, and, of course, a whole lot of snow.

The only things missing in the film are what it needs: a decent script, real actors, a director, and possibly something that could pass for humor. As it is, you will have more fun making ice cubes than watching SKI PATROL.