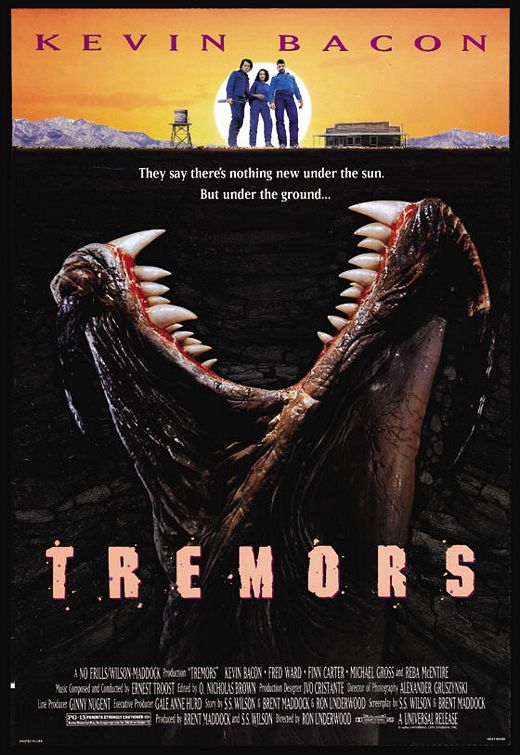 In the small, isolated town of Perfection (population 14) in the desert of Nevada, Val and Earl are two unemployed cowboys that do odd jobs, like stringing barbed wire or cleaning cesspools. They are trying their hardest to get out of town and on to a new life, but are continually stopped when they find bodies that have apparently been devoured.

The handymen meet a young student geologist named Rhonda who has come to town to research the mysterious rumblings registered in the area. They find that the strange tremors are being caused by extremely big, hungry creatures resembling gigantic 30 ft. long earthworms with monstrous-sized mouths. Traveling underground at comic-alarming proportions (you just see this furrow moving across the desert at megawarp speed), the creatures, which are named “graboids” and are blind, hunt their victims by honing in on the slightest surface vibration.

When the graboids cause a landslide blocking the only road out of the valley, the townspeople are stranded. The rest of the film shows the town populace, by this time nine, attempting to survive and kill their antagonists.

Toward that end, a glancing social commentary is provided on the town’s social stratum: the upper class, represented by a survivalist couple, eagerly employ their expensive arsenal against anything that moves; the middle class, four of them, naturally, are variously unaware, unconcerned and unprepared for emergency; the lower class, Val and Earl (aided by Rhonda) are the ones who prove themselves to be resourceful, practical and unflappable.

However, the film, done in the genre of the 1950s monster movies, has no redeeming values whatsoever. With so much obscene, crude and profane language, it is almost impossible to keep count. From the first line of dialogue to the last, there were 152 instances of offensive language. The violence was also extreme and gory, with the camera lingering over limbs and decapitations that the creatures did not devour. In every way, it is a very disturbing film, and hard to understand why these actors who have had rather respectable careers would stoop to such a level.

For the sake of your stomach and your soul, do not see the film nor let anyone whom you have influence over see it either, even if it becomes a cult classic, as indicated by some of the secular reviews.