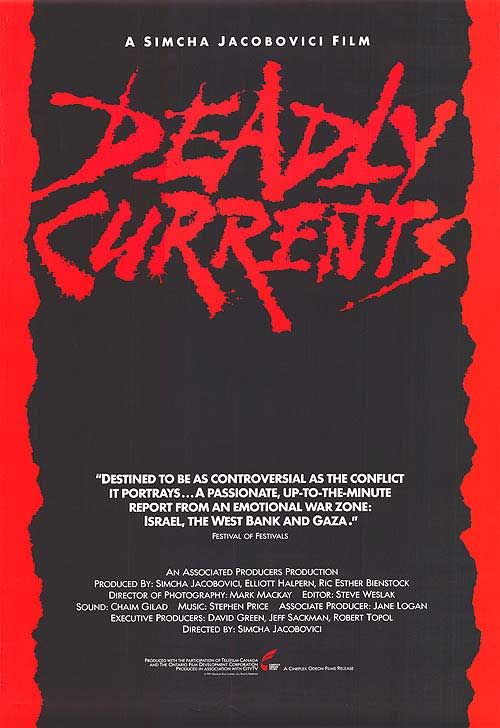 DEADLY CURRENTS is an excellent and even-handed documentary (though with a few obscenities and very brief, upper-female nudity) which explores the length and breadth of the Israeli-Palestinian conflict. A wide range of participants from both sides of the issue express views which range from conciliatory to combative, and intelligent to annoying. Unfortunately, no obvious solutions are expressed on screen, and one leaves with the sense of the inadequacy of human solutions.

(FR, B, L, V, N) Biblical and false religious perspectives combined with 7 obscenities & 1 profanity; brief upper female nudity on beach and on TV screen; and, brief documentary and newsreel footage of bloodied victims of violence in the Palestinian West Bank.

The documentary DEADLY CURRENTS explores the Israeli-Palestinian conflict starting from the time of Abraham, Isaac and Jacob, and continuing to the present. After Joshua conquered the land and it was ruled by the kings of Israel, it was overrun by a succession of foreign kingdoms beginning with Babylon. Rome conquered Israel in 70 A.D. From that time until 1948, foreign powers ruled the land. In 1948, the land came back into Jewish possession. The remainder of the film deals with the present-day conflict: the heartaches and sufferings of both Palestinians and Jews, the tough decisions and the nearly impossible solutions to the problem.

Despite some obscenities and brief upper-female nudity, DEADLY CONFLICTS is an excellent introduction to the Israeli-Palestinian conflict. Powerful in its fairness, it allows the faces and voices of the various sides to speak for themselves. Some of the “faces” include soldiers, terrorists, intellectuals, musicians, journalists, workmen, housewives, and children, all either perpetuating or victimized by animosity and violence. The documentary is effective throughout with its lucid, simple statements devoid of slant or bias. Regrettably, one leaves DEADLY CURRENTS with a sense of frustration since human solutions are clearly failing. Very likely the conflict will not end until the Prince of Peace himself comes again to this troubled land.