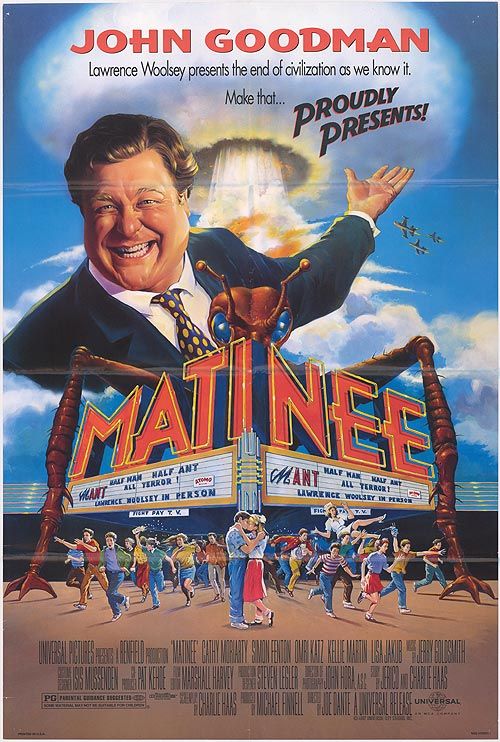 MATINEE explores some standard adolescent themes in the context of the Cuban Missile Crisis and the opening of the B-grade horror movie MANT. This symposium of silliness fails because it takes itself much too seriously and includes 7 profanities and 8 vulgarities, a 15-year old girl with a prodigious sex drive, and destruction of property.

Set in Key West during the early 1960’s, MATINEE contrasts the very real terror of the Cuban Missile Crisis with the imaginary terror of B-movie artisan Lawrence Woolsey. Larry’s film du jour is MANT (Half Man…Half Ant… ALL TERROR!), a peerless classic of the cinematic art rendered in ATOMOVISION. To give his thriller even more punch, Woolsey rigs the theatre with vibrators (to simulate the earthshaking steps of the MANT), electrical shockers and a guy in an ant suit. Numerous local dramas unfold around the opening of MANT, involving 15-year olds Gene and Stan and the typical source of adolescent hormonal imbalance; girls. Stan has a crush on Sherry, whose sexual desires have been prematurely awakened by her previous boyfriend Harvey. Gene becomes smitten by Sondra, the only child of beatnik parents.

MATINEE contains a surprising balance of ridicule: the “Citizens for Decency in Entertainment” who are presented as hypocritical (they are actually employed by Woolsey to generate controversy), and Sondra’s beatnik parents who represent the intellectual vacuity of those who insist that free speech means accepting filth and nonsense. John Goodman plays Woolsey like P.T. Barnum with a messiah complex, and the result is neither truly funny nor profound. MATINEE could have been hilarious, but, regrettably, this symposium of silliness fails because it takes itself much too seriously.