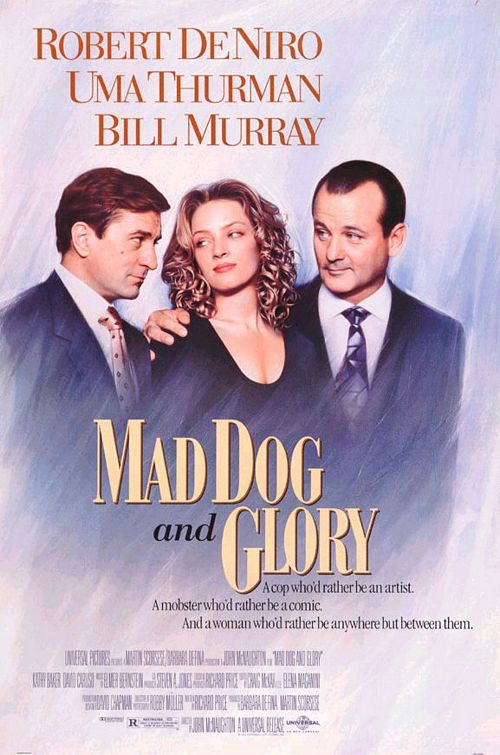 MAD DOG AND GLORY is about an introverted police photographer nicknamed "Mad Dog" who unknowingly saves the life of a loan shark mobster who, in gratitude, offers the photographer his bartender/mistress girl friend as a gift for a week. However, even the ensuing romance can't save MAD DOG AND GLORY with its dark, Scorsese-esque world of immorality, violence and chaos, complete with uneven, languid acting performances.

MAD DOG AND GLORY is a slow-moving drama with neither interesting characters nor a compelling plot to move it along. Robert De Niro delivers a bland performance as Wayne, a reclusive Chicago police photographer who is bored with life. Sarcastically nicknamed “Mad Dog” by his police buddies, Wayne stumbles upon a psychotic killer in a convenience store holding a man hostage. Wayne manages to save himself and the hostage. The hostage turns out to be Frank Milo (Bill Murray), a quirky mobster with a sense of honor and humor. Frank invites Wayne to his comedy nightclub where he performs a stand-up comedy routine for the amusement of his guests and fellow mobsters. Frank proceeds to show his appreciation by having the killer murdered and sending his female bartender/mistress Glory to Wayne’s house for a week-long “visit.” Frank slowly falls in love with her. The real conflict comes when Wayne refuses to give Glory back, even though Frank insists that he owns her.

MAD DOG AND GLORY is a listless drama that indulges in casual sex, perversion and violence. We are treated to scenes of fornication, murder, abuse against women, and bloody fist fights that create a Scorsese-esque world where violence and immorality are the rule and honesty and moral integrity don’t exist. This point of view gives the film an overall feeling of gloom and depression, and leaves us with little hope for the future as the end credits roll.